19 People Lady Luck Has Turned Her Back On

20 Squirrels That Stopped by for a Quick Hello

A Mother Was Told Her Stomach Was “Nasty,” but She Proves How Beautiful Women’s Bodies Really Are

Foodgasmic Soap by a Russian Artist Can Tickle Your Taste Buds

A Psychologist Reveals How We Teach Our Children to Betray Themselves, and It’s a Bitter Truth 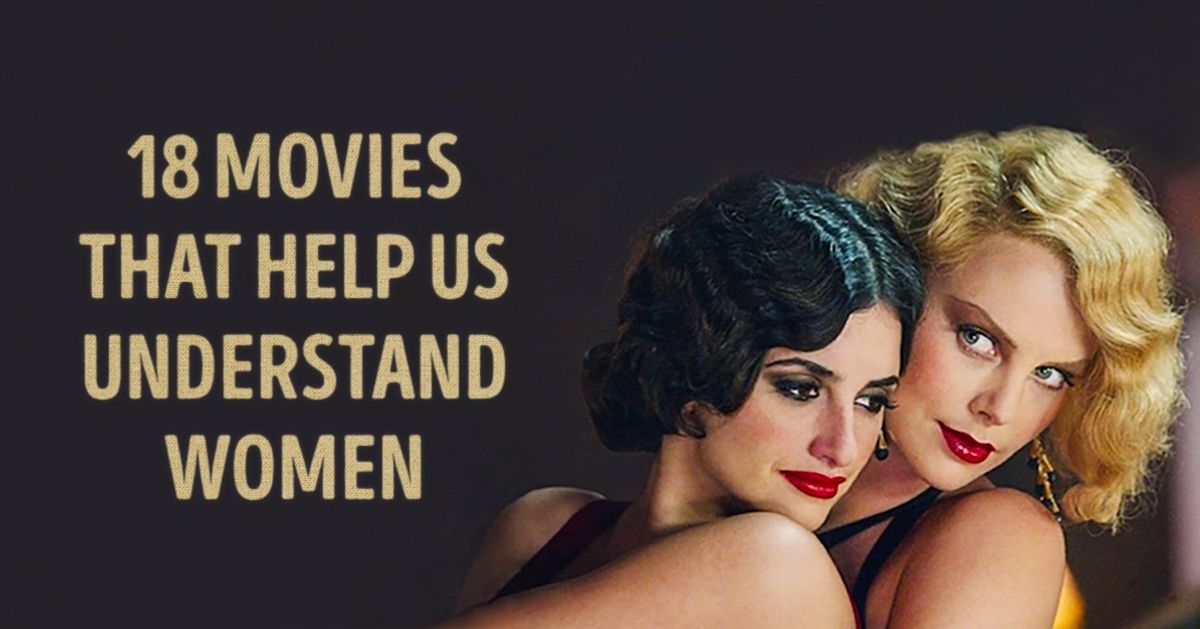 18 essential movies that help us understand what all women want

Female psychology is a tough nut to crack. That's why we at Bright Side selected 18 movies that help you understand the inner world of women. Of course, these films won't provide answers to all the questions, but they are sure to ease some misunderstandings between the genders.

The movies listed below are very different. Some of them are tragic and serious, and some are humorous and naïve. Nevertheless, each represents a certain side of the mysterious female nature. Try to watch them, and soon you may say that you know what women want.

Many women admit that certain episodes of this movie look like a documentary based on their lives. You may also have a female friend who builds a career, conquers men and deals with struggles the same way Renee Zellweger's character does.

Charlize Theron's heroine is breathtaking, while Keanu Reeves is strikingly handsome (and undressed most of the time). He is so amazing that he doesn't even need to act: from the very beginning everybody sees clearly that it is Mr November who the heroine will fall in love with. The film is a true guide to understanding love choices women make and the reasons behind them.

Tim Burton's new work tells us about a talented woman whose tyrannous husband passes her paintings off as his own while she creates new masterpieces, staying locked up in a studio. If you are bewildered by the women who let their partners oppress them and you can't understand why on earth they do it, this movie is just for you.

It is a story of a naïve girl growing into a young woman ready to live in the cruel world of adults. Though the plot is marked neither by violence nor by death, the film is a real tragedy. Sad to say, a lot of women have to deal with similar ordeals while growing up.

The main character of Woody Allen's film, Jasmine, is amusing, a bit awkward and completely desperate. The film is a brilliant example of what women do and think when they have to move on after losing something important (a husband, a job, a fortune or all of the above).

The main idea of the film is the sad truth that sometimes women do not know what they really want. It can be the fault of the teenage girls they used to be. Those nasty adolescents sometimes show up throwing tantrums, hastily changing decisions, refusing to marry or take responsibilities. Maybe the story told in 'Laggies' is a bit exaggerated, but it still contains a certain grain of truth.

This film is widely known for its kindness and a special fairy tale quality. We want to draw your attention to one particular moment when Amelie tries to find an excuse for Nino's absence, and thinks of a terrorists' attack, a bank robbery, Soviet warheads and other sweet nonsense. She is not alone; we all think like that now and then.

It seems that the central theme of the film is the uniting and healing powers of family, but then you see that it proves just the contrary; the nearest and dearest are the ones who can hurt you the most. That fact is illustrated by complex relationships between family members brought to life by the wonderful actresses Meryl Streep and Julia Roberts.

Though some episodes are too sugary, the movie provides a valuable insight into what women really expect from their prince charming. It turns out that they can be very demanding as to gallantry and courtliness. Wearing a lacy jabot won't be enough to please them.

We can't help but mention this cartoon because it is far more than just a story of a tomboy princess and her adolescent riot. It shows us one of the most touching stories of parent-child relationships. This movie will prove that sometimes it is hard to accept other people's choices. It also shows that even the most remarkable mother can turn into a furious she-bear if she believes her children are being offended.

The plot is quite simple: there are two women with completely opposite priorities, but each of them wants to live a happy life. And the key to that is a loving and reliable partner who will never let his lady down.

You can't take this story too seriously as it is a comedy designed for having fun, nevertheless, it proves that a glamorous girl can at the same time be a smart, talented and interesting person. You'd better not underestimate the abilities of women!

Mel Gibson acted bravely and sacrificed his male pride in order to find out what women want. Are you jealous of his new gift? Do you really think it is a wonderful ability? Because it sounds more like a curse to us...

Malena is a young widow whose striking appearance enchants men and makes other women hate and envy her. This is a story of beauty that became a real punishment for its owner and brought her only disappointment and grief.

To understand the complexity of the female nature one also needs to see its dark side. This movie shows how treacherous and malevolent women can be if they are offended. The story is very exaggerated, but proves one more time that it's best not to cheat on a smart and resourceful wife.

Under the Tuscan Sun

This film is dedicated to the women who already trust neither men nor themselves. It is as gentle as the Tuscan breeze and as juicy as the local grapes. Like the main character, every woman sometimes thinks of dropping everything and moving to a sunny spot, where she can buy a nice house and live a happy life.

Head in the Clouds

This story can help you understand the nature of female love, which is an odd and sometimes incomprehensible feeling. Even if it doesn't, you can still enjoy the breathtaking duet of two Hollywood beauties, Charlize Theron and Penelope Cruz.

Women tend to have a better imagination than men. Sometimes they are even able to create their own version of reality and stand by it, turning love into a nightmare. Do not hesitate to watch this film! It has more suspense than it does melodrama.