14 Items That Every Lady Should Have in Her Bag

7 Mistakes to Stop Making If You Have Fine Hair 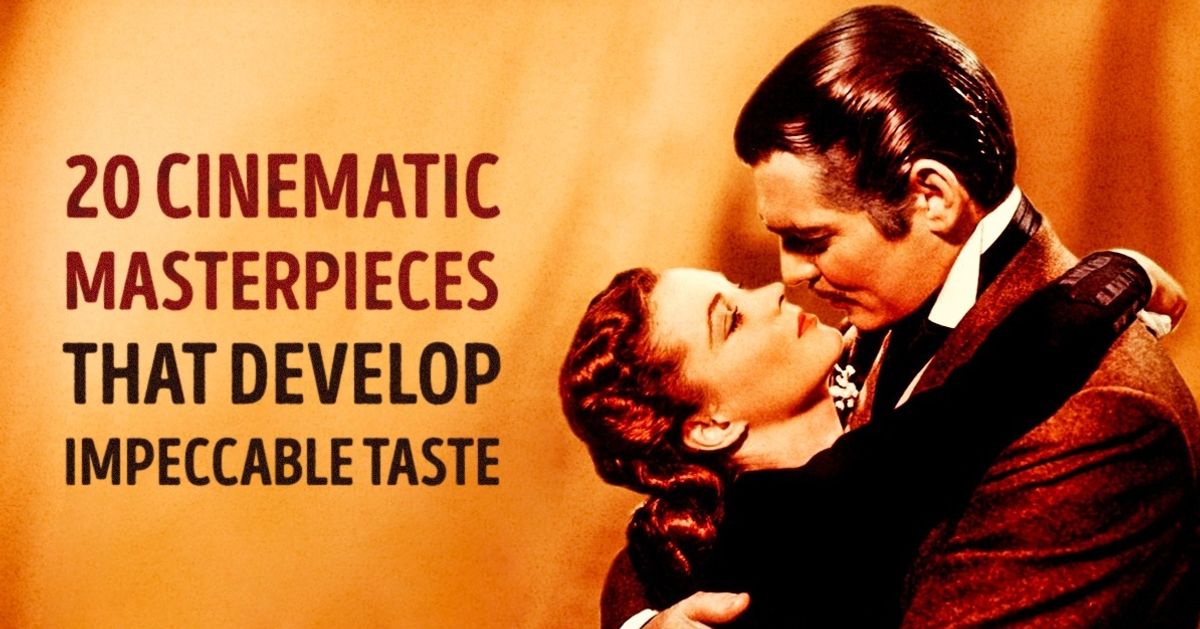 20 cinematic masterpieces for developing an impeccable taste in film

Cinematography is a unique art form for storytelling. There are movies that have the power to entertain, inform, move us emotionally, and change our perceptions of life.  Bright Side decided to make a list of 20 movie masterpieces that will help you to gain a better understanding of world cinema heritage.

Marcello is a journalist who covers tabloid news about the life of Italian elite in the 1950s. Women pass him like shadows without affecting his feelings. Even the presence of the American film star Sylvia, who is the embodiment of sexuality and vice, doesn’t knock him out of his stupor...

It’s a story about a kid who was abandoned by his mother immediately after birth. A lovely and funny young man finds the abandoned child in the alley and raises him into boyhood.

It’s a really charming and touching silent film about a young man who meets a beautiful blind girl, selling flowers on the street corner. She mistakes him for a wealthy duke. When the man learns that an operation may restore the girl’s sight, he sets off to earn money for her surgery.


Gone with the Wind

The mighty winds of the Civil war carry away the carefree youth of Scarlet O’Hara in an instant. The familiar music of the balls is replaced by the sounds of cannonade. It’s a challenge for the young woman to fight for a new life, reconsider her ideals through poverty and agony, gain self-confidence, and find true love.

Serial killer Hans Beckert keeps terrifying the residents of the German city. Little girls don’t come back for dinner - they don’t come back at all. The police force gives its best effort trying to arrest the serial killer. Members of organized crime are concerned about the siege of the police and decide to chase the murderer themselves.

During the First World War, two French aviators, Captain de Boeldieu and Lieutenant Maréchal, are shot down by a German aviator Rittmeister. Both are captured and sent to a prisoner-of-war camp, where they join the British prisoners in digging a tunnel to escape.

This film is about the marriage of the captain of the barge «L’Atalante», Jean, to a woman named Juliette, a village girl, and their honeymoon through the channels of France heading to Paris. They are accompanied by Papa Jules, a crusty old man who has seen the world and has the tattoos to prove it...

Reporters are trying to figure out what the last word "Rosebud” of the millionaire Charles Foster Kane was. They find people who knew Kane and try to get more information about his life full of ups and downs, his rise to fame, and his great fall from the top …and the meaning of the word “Rosebud”?

Laura Jesson and Alec Harvey met in a cafe at a railway station. They continue to meet every Thursday, although they know that their love has no future…


It's a Wonderful Life
Frank Capra

This classic film, directed by Frank Capra, tells a story about George Bailey, the owner of a credit card company in the fictional American town of Bedford Falls. He is an honest, responsive, loving husband and father. Being depressed by difficulties and adversities, he contemplates suicide. It is obvious that a person who rejects the most precious gift from God, life, needs the support of a guardian angel. Prayers for him reach Heaven. Clarence, Angel 2nd Class, is assigned to save George's life.

Antonio Ricci, an unemployed man in post-war Rome, is pretty delighted  -  he has finally landed  a good job. On his first day of work, his bicycle is stolen. He is not able to work anymore, as he needs a bike to hang up posters. He and his son walk the streets of Rome, looking for the bicycle...

The famous poet Orpheus, with the beatific experience of life and glory, becomes obsessed with the Princess of Death. Their love is mutual.  In turn, her servant is in love with Orpheus’ wife - Eurydice. However, this really weird love quadrangle is doomed. The Princess takes Eurydice to the kingdom of darkness, and Orpheus sets off searching for her.

An old couple travels to Tokyo to visit their children – the elder son is  a doctor, and the daughter runs a  beauty salon. They both lead their own busy lives, and don't have much time for their parents. Realizing their obligation to entertain their parents, they decide to pay for the parents’ stay in the nearby resort. The plan fails, as the parents soon return to their children, as the nightlife at the resort interrupts their sleep. Before leaving, Tomi stays with her widowed daughter-in-law, while Shukichi goes out drinking with some of his buddies. They realize they have become a burden for their children and decide to go back home.

This simple and fascinating love story, directed by Claude Lelouch, is about young widow and widower who meet by accident at their children's boarding school. Their frequent encounters finally blossom into love. Their relationship is complicated, and almost impossible, because of the memories of their deceased spouses.

In the middle of the XIV century, a knight named Antonius Block and his squire return after ten years of the Crusades to their home, Sweden. Block is tired of his life and does not see any reason for the sake of which it is worth living. Before he makes any big decisions, he wants to make sure that God exists...

Jalsaghar depicts a palace in Nimtita (Bengal). Biswambhar Roy, one of the last feudals in Bengal, is sitting on the terrace and smoking hookah. Suddenly, he hears the sounds of music from next door – there is a celebration at his nouveau riche neighbor’s house on the occasion of traditional initiation rites of his son...

When two Chicago musicians witness a mob hit, they flee to Florida by train disguised as women. Now, they are Josephine and Daphne - new and pretty musicians of an all-female jazz band. Their plan does work for some time. Soon, the soloist of the band, Sugar, is swept off her feet by Josephine, while an old "playboy" millionaire decides to court Daphne. The boss of the mafia, Spats Colombo, reveals the secret of two guys and is determined to kill them...

Marion Crane is fed up with the romance she has with a divorced man, as they only meet during lunch breaks. She steals a large sum of money from her employer’s client, leaves town, and heads towards her lover’s store in California. Tired after a long drive, she checks in a remote motel run by a young man…

Viridiana’s uncle wants to see her in his castle before she becomes a nun. In reality, he has long been in love with his niece. This passion overwhelms the girl so much that she decides not to go back to the monastery.

This brilliant movie has an excellent script, revealing the essence of the agony of Fellini. It’s all about the process of creative activities of the director. Crisis, seeking, tricks of the imagination, deadlocks, and a continuous stream of subjectivity and objectivity all combine flawlessly. Of course, there are many women, the illusory harem of the hero, all of who are literally obsessed with him.