15+ Photos Where the Flame of Love Still Burns Brightly

“I Don’t Ever Want to Be Away From Her.” Bruce Willis Had to Wait 57 Years for the Greatest Love of His Life

This Mom Faces Disapproval Because Her Son Wears a Leash and Backpack, and She Explains Her Reasoning

I’ve Been Trying to Not Harm the Environment for 5 Years, and I Want to Talk Honestly About the Pros and Cons of My Choice

An Artist Makes Cakes Inspired by Our Favorite Movies and Cartoons, and the Details Are Incredible 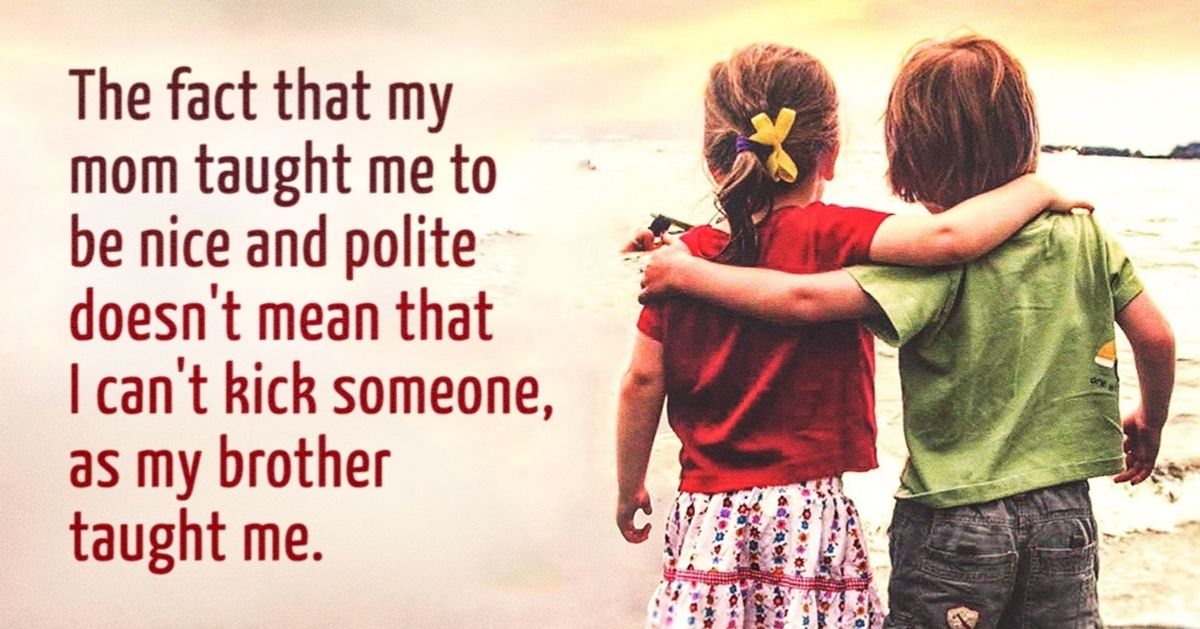 ’I’m a happy person. I have an older brother’

How did I get this scar on the forehead? My brother and I were trying to share a plastic bracelet, I lost my balance and smashed into the fridge.

How did I get that scar on my leg? We decided to go down the hill on a bike together, and he said: 'Don't you wet your pants, everything’s gonna be OK'.

How did I get that scar on the hand? Oh, well, that was my fault...
These are the cons of having an older brother.

And now we’ll hit the high spots. I'll talk about the happiness, 'the greatest happiness in my life' - about him, the older brother! (My brother’s quote)

We’ve been together since the day I was born. He’d come to this world two years before me. He knew more than I, that’s why in my eyes he had always been a 'pathfinder'. He was first of the two of us who went to the kindergarten and then to school, and I was waiting eagerly for his stories – what's it like there, in the kindergarten? And in the school? What should I know to survive?

I was lucky: I’ve had a how-to-survive coach since the day I was born. To me, he was either a tutor of the action film stunts or a football coach, or a master of manipulation, or, of course, my older brother to whom I had to listen to.

Thanks to my brother, I knew for a fact what a man is, and where his brain is situated (in the head, of course!), how to talk to a man and get any the necessary information across (without beating about the bush).

He told me about his girlfriends. He could trust me, I was his little sister – and that's almost almost as good as a buddy. And I told him who was worth his attention and who wasn't. A younger sister can be helpful too. She can be both a friend for heart-to-heart talks and a 'female brain' which helps to understand complex and illogical women's behavior.

I’m not a lady. Dolls were never my cup of tea. I was always playing with my older brother, which was far more interesting. One could hardly have smelt a hairspray in our house, however my brother's soldering experiments could be smelt from a mile away. Dresses were never my everyday clothes – they were unsuitable for skateboarding and scoring a striking goal. I didn’t know which hue of lipstick suited me, but I knew for a fact where to hit in case any oaf should think that ladies can’t fight.

I dare say, no one ever touched me, because my formidable older brother was standing by me.

I’m glad that my brother always took me with him, even though I was a girl. We played football together, swam, rode bikes, just walked, went for a ride, got into trouble (even life-threatening). And whatever happened, we were always together. Of course, we fell out, fought, declared war on each other. But it was in our childhood, now we almost forgot our quarrels. We know that we’re each other’s 'one and only'. We’re irreplaceable for one another.

We can just sit silently in the car, listen to our favorite music and feel the incredible atmosphere of the most peaceful and gentle warmth. Friends don’t like to play charades with us because we're guessing each other's words and whole sentences too fast. It takes 2-3 seconds figure out what the other is thinking. Most people think that we can read each other's thoughts. I’ll tell you a secret: it’s true.

Yes, he still closes me in the bathroom, and cannot help giggling behind the door. If I'm driving and someone cuts in front of me he can leap from the car at any moment and punish the offender. If I cut in front of somebody, he says: 'Well done! My school!'

I'm an extremely happy person. I have an older brother. And at the same time he’s my friend, adviser, helper, someone to rely on, tutor, same team player, soul mate and just a wonderful person.

Being kids, we used to talk to each other non-stop, because we lived under the same roof and spent all our free time together. But don’t be fooled into thinking that it was a time of peace and tranquility and sweet talks. No! In fact, not only could my brother piss me off, he was the only person capable of bringing out the beast in me! However, years of training did their part. Now I am absolutely unflappable, moreover, my infinite patience would make even Buddha jealous.

All in all, an older brother is a treasure.

Having an older brother means being able to do a good share of men’s work, as well as women’s. For instance,being able to change a wheel, make a fire, dig potatoes, nail, and give somebody a black eye.

It’s when someone is threatening you, and you have a secret weapon up your sleeve 'I’ll call my brother! He’ll kick your butt!'

It’s when you've both done something naughty, but he’s the only one who get punished because he’s older! Or when it’s you who'd done something you shouldn't have had, but he takes the blame to protect you (just for your information: parents aren’t so inventive in punishments as the older brother is).

The older brother’s like a stone wall, but a soft one. You can also lie on his belly.

With love and respect to all the brothers and sisters, older and younger. Love and cherish each other!