20 People Who Blended In With Their Surroundings Perfectly

18 Photos Showing How Animals Can Take a Nap Absolutely Anywhere

15+ Elder Pets That Are Still the Darlings of the Family

15+ Photos That Prove First Times Are a Magical Thing 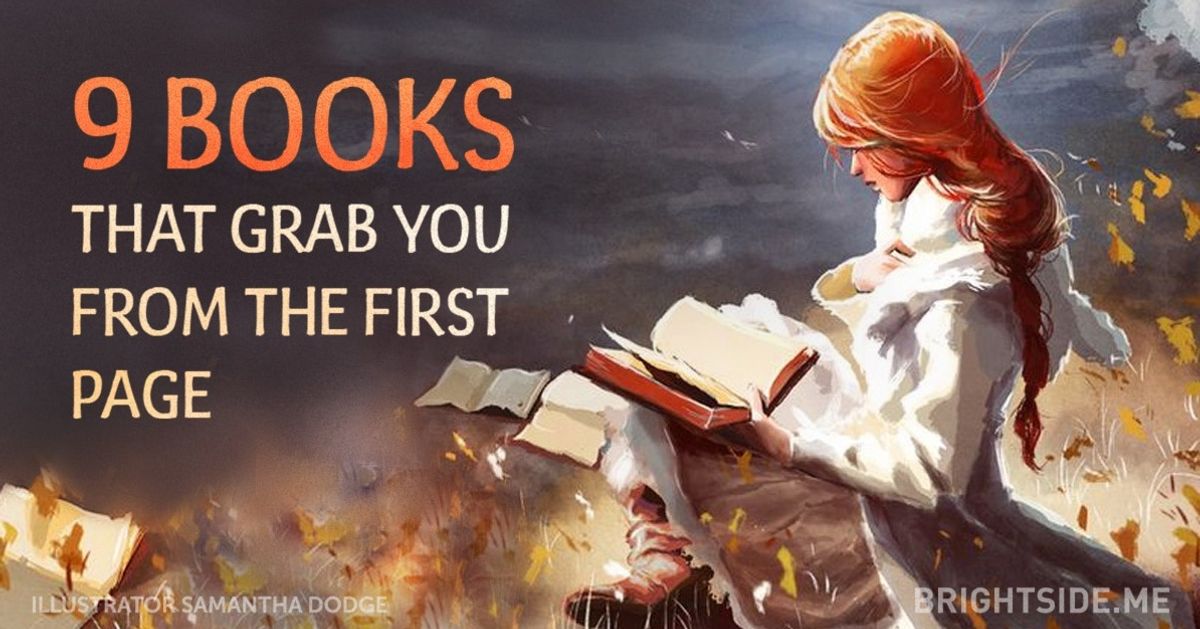 9 brilliant books that will grab you from the first page

Sometimes after finishing a light-hearted book, you feel the urgent need to load your mind with something more sophisticated than just a fun and romantic story. You want to challenge yourself and read a great book that tells an incredible story and offers you millions of puzzles to solve and hundreds of lives to live.

When you find it, you devour such a book; you stay up late finishing it, and just can’t put it down. You’re making promises to gallop through one more page and then go to sleep, but you fail to keep your promises again and again.

We collected nine brilliant books for you to read. They will grab you right from the start and won’t let you go until the very last page.

The Shadow of the Wind

Carlos Ruiz Safón
With this book you will dive into surreal mystical labyrinths of Barcelona and discover a whole other world coexisting with ours. In this world one single event triggers all the subsequent ones: you run into some evil strangers, fall in love with beautiful yet strange women, try to solve different puzzles of the past and finally come a little closer to a great mystery that will change your life just as it did with everyone who attempted to do the same.

John Fowles
Nicholas Urfe, a young Englishman, suffers from a dangerous ‘disease’ — he is simply bored with his life. He looks in a mirror and can’t recognize the man who stares back at him. To find peace and arrange his thoughts, he accepts a teaching position on a remote Greek island and escapes. There, he starts living his new life and even makes some space for new friends, experiments with ghosts and many other things. Enjoy this masquerade but remember: nothing is impossible.

Christopher Priest
Richard Grey loses his memory in a car bomb accident. In a hospital, when he is visited by a girl, Susan Kewley, he attempts to recall the forgotten period of his life when they were a couple. It seems to him that he knows the girl from their French summer adventure, but Sue herself states that she has never been to France. What’s that all about? And why does Susan keep on using the word ‘Glamour’ when referring to their life together?

I Am The Messenger

Markus Zusak
Ed Kennedy is an ordinary cab driver without much of a future. He’s terrible at playing cards and hopeless with women. Just like that he lives his sad little life until he inadvertently stops a bank robbery. This is when he becomes the messenger. Who chose him for this job and why? Try to find out.

Julian Barnes
What is real England to you? A country where perfectly romantic Robin Hood tales come from? Or is it a nation where Her Majesty Queen Elizabeth II serves as a main monarchy symbol? Do you think of it as a country that has granted the world the Beatles and English ale? Well, we are still not sure how many angels can dance on the head of a pin, but it’s proven by Julian Barnes that the whole of England can fit into a gigantic theme park on the Isle of Wight. What an interesting idea!

The Land of Laughs

Jonathan Carroll
Everything got mixed up in the dreamy Midwestern town of Galen: a man got killed by electric shock, a dog gave birth to nine puppies, a boy, who was eating an ice-cream, wasn’t happy and didn’t smile at all. Something definitely went wrong with this place. Have you ever wished that magic was real? Try ‘The Land of Laughs’ — it’s light-hearted and absurd, laughable and a little spooky. We guarantee it will make you smile.

Lars Saabye Christensen
‘The Half Brother’ is a huge and epic story, both figuratively and literally. It focuses on the life of one non-traditional family, but every single character of the book lives his or her own private life to the fullest. The book is truly intimate; sometimes you feel a little uncomfortable penetrating one’s thoughts this deeply.

Ben Elton
On February 24, 1920, a young Jewish woman, Frieda, gave birth to her twin sons. One of the babies was stillborn. Rather than going back home with the only child, she decides to adopt a baby who became an orphan just after he was born in the same hospital. Coincidence or not, but the same day, the Nazi Party was formed in Munich. The Party will affect the lives of both brothers but in a very different way. It’s an utterly touching story about sacrifices that people are ready to make to save their loved ones.

The City &amp; the City

China Miéville
This is a story about ‘twin’ cities Besźel and Ul Qoma. The police find a dead woman’s body in the suburbs of Besźel. At first it seems like a routine murder, but the inspector, Tyador Borlú, finds some conspiracy in this crime. He feels obligated to continue his investigation in the city of Ul Qoma although it’s strictly prohibited for any citizen of Besźel to enter Ul Qoma. This is a great detective story with a lot of unexpected plot twists and puzzles to solve.
Preview photo credit Samantha Dodge
5-56-
41k