© 2014–2022 TheSoul Publishing.
All rights reserved. All materials on this site are copyrighted and may not be used unless authorized by the Bright Side.
7219-

11 Things to Discuss With a Partner Before Having Kids

21 Times People Found Out Why Genetics Are Fun

15 Pairs of Celebrities Who Went for the Same Outfit, and We Can’t Decide Who Looks Better

12 Photos of Celebrity Siblings That Prove Some Things Never Change 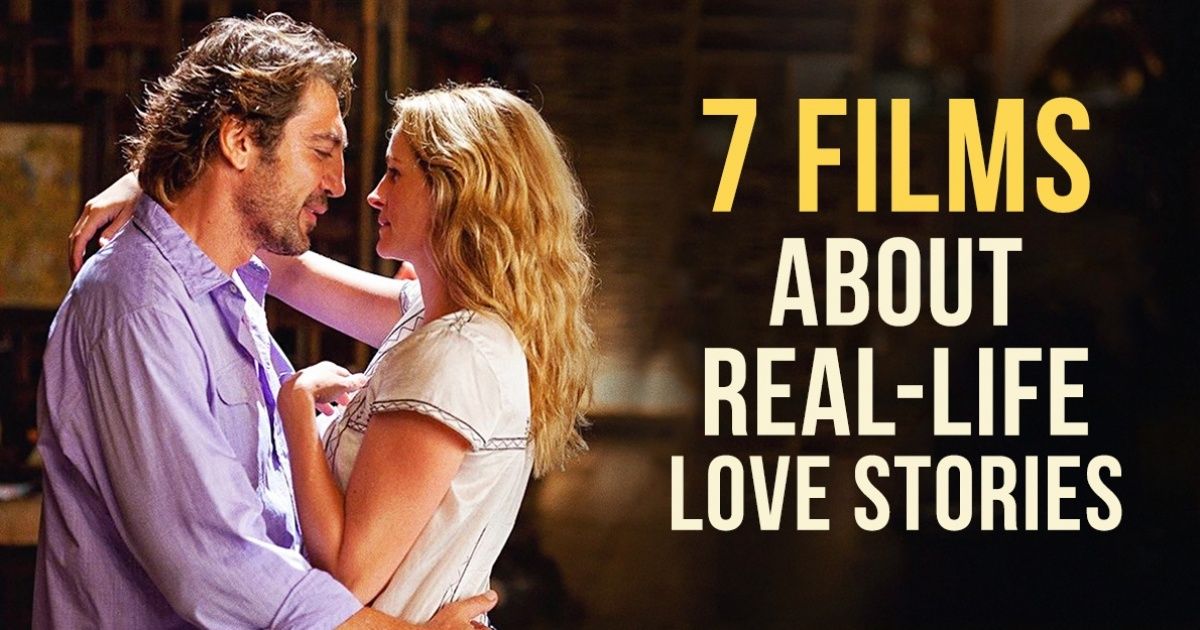 There’s a saying which many of us have heard: "Love like in the movies." But sometimes, real life is the best inspiration for film-makers interested in the subject of love. Incredible love stories happen for real in plenty of people’s lives — the kind of romances which no screenwriter could ever dream up. And sometimes, these experiences become the basis for great movies.

BRIGHT SIDE chose seven such movies for you. They’ve entered the hearts of so many people precisely because they all show us one thing — the meaning of true love.

The movie: Elizabeth, a successful writer, suddenly realises that she’s not living the life she wants. She decides to drop everything and go travelling around the world in order to find herself. In Italy she indulges in gastronomic excesses, but in India she tries to get back on the spiritual path. And finally, in Bali, she meets her true love.

In real life: The film is based on an autobiography written by Elizabeth Gilbert. Written in a highly intimate style, we learn that the love between Elizabeth and Jose (in the movie his name is Felipe) developed in exactly the same way in real life as it did in the film. However, in the final scene of the movie, the two lovers decide never to get married, but in the real life the couple is still married. One thing forced them to do this in real life: Jose was detained at the border and deported from the United States.

Now, Elizabeth and Jose live in New Jersey. They have their own shop, "Two Buttons," where they sell souvenirs from Asia. Elizabeth continues to write books.

The film: The main characters are charming blonde Lucy Whitmore and a womaniser named Henry Roth. The latter was fed up of meeting girls who already bored him on the second date. That’s why he is attracted to Lucy, with whom every date is like their first. The truth is that she suffers from amnesia as a result of an accident, and forgets everything that happens during her day by the next morning. Henry is not going to give up, however, and he records the key moments of their life on tape for Lucy. So she starts every morning studying their story.

In real life: Lucy’s prototype is American Michelle Philpotts, who suffers from a rare form of amnesia: after a series of accidents, time and memory stopped for her, and for 21 years she has lived in 1994. Her beloved husband proves to her every morning that they are married by showing her photos from the family album and notes recording the most important events of their life together. The difference compared to the movie is only in the fact that in real life the couple knew each other before the accident, and her husband doesn’t have to win the love of his wife every day.

Michelle’s husband sticks little notes to the fridge for her recording important events which have happened to them since 1994. Every day Michelle lives the same part of her life again and again.

The film: On her vacation in Kenya, a beautiful woman, Carola, falls in love with Lemaliana. She decides to quit her sensible life in Europe and settle down with her spouse in the Kenyan wilderness. It’s not easy for Carola to get along with the natives, whose morality seems backward to her. In time, Carola gives birth to their first child, but even this event can not keep her at her husband’s side. Not long after she decides to go home, exhausted by his jealousy and wild way of living.

In real life: The story of Corinne Hofmann, described in the book of the same name, became the basis for this film. Corinne met her Kenyan lover Lketinga Leparmoriyoin in 1986, during a trip to Kenya with her boyfriend. She broke up with the latter, sold her business in Switzerland, and married her new lover in 1988. She then experienced a lot of problems: not only dangerous diseases, but also cultural differences with her husband — Lketinga was a very jealous man and often hinted that he doubted he was the father of their child. Corinne loved her husband very much, but after a few years of torture she decided to go back to her native land.

Corinne and Lketinga not long after their first meeting.

The film: This is a profound and shocking movie which tells us about how all-consuming passion can run out of control. It tells the story of a romance between a man hailing from the rich bourgeois and his servant. giving up eating and drinking and forgetting about their families, they abandon themselves to passion. In a wild search for new forms of union and pleasure, the woman strangles her lover before going mad.

In real life: As strange as it may seem, the movie depicts the details of a real life love affair almost exactly. At the time of its occurrence, the mesmerising story of Sada Abe caused great upset in Japan. In 1936 she committed a terrible crime against her lover simply because she didn’t want to share him with anyone else. Their first date was said to have lasted for four days, during which the couple never left their bed. Sada Abe was sentenced to six years in prison for her actions.

The film: This film depicts the romance between a schoolgirl, Alya, and a soldier, Pavel, which developed in the spring of 1986 during the Chernobyl accident. They fall in love at first sight, and decide that they must be together no matter what fate awaits them. But Pavel receives a serious dose of radiation from working on the clean-up of the destroyed nuclear power station. The young man runs away from hospital to see his girlfriend, and they spend all day in a deserted town alone, intoxicated by their feelings for each other. The film shows us how Alya and Pavel were like two moths which flew towards each other, taking no notice of the danger all around them.

In real life: The characters of Alya and Pavel are generalised from several love stories that occurred during the Chernobyl disaster. The main affair in question which this film is based on is the tragic story of firefighter Vasily Ignatenko and his wife Ludmila. Vasily worked on the post-disaster clean-up operation and received a large dose of radiation. His wife risked her life to look after her doomed husband until his last breath, despite the fact that doctors categorically forbid her to be beside him.

The wedding of Lyudmila and Vasily Ignatenko.

The film: A highly intelligent woman called Olga brings up her son alone. She is no stranger to love, but the problem is that she is married to another man, and can’t work up the courage to break out of her current marriage. Trying to find a way to better organise her life in some way, she forces herself to take up the offer of a rich man to go with him to start a new life in a different city. Her lover, Vadim, realises what he’s lost, and goes after Olga. He brings her back to her old life. But then nothing has changed — he is still unable to take a decisive step forward to improve their life together.

In real life: screenwriter Vladimir Valutskiy and actress Nadezhda Repina were prototypes for Vadim and Olga. Their secret affair had lasted for 14 years. The two lovers met in Yalta, and at the time both were married. Repina divorced her husband, but Valutskiy stayed with his family. He promised to get a divorce when Nadezhda met a dashing Italian man who posed a serious danger to their affair, but did not keep his word.

Vladimir, whose wife was a famous actress, was essentially describing his own story in the script to the film. Nadezhda Repina is on the right.

The film: Paige and Leo celebrate the fourth anniversary of their marriage. The couple ends up in a car accident, and Paige slips into a coma. Her return to consciousness is marred by a sense of loss: she doesn’t recognise her husband and doesn’t remember their relationship. So Leo decides to win Paige’s heart again.

In real life: A couple named Krickitt and Kim Carpenter served as the prototypes for Paige and Leo. Amnesia caused by a car accident erased memories of the last fifteen years of Krickitt’s life. This included the time when they first met and got married. Kim didn’t give up and was by his beloved’s side, even when he didn’t feel the love from her that he felt himself. In time, Krickitt fell in love once again with her husband. Later, Kim Carpenter wrote a book called "The Vow", which became the basis for the movie.

Krickitt and Kim. Now they have two children together.

Of course, this is far from a complete list of films based on real-life. If you know of any more, please let us know!