A true photographer has the gift of capturing the beauty and truth in every moment. And although Elliott Erwitt used to say that "the whole point of taking pictures is so that you don’t have to explain things with words," knowing the background story helps to understand an artist’s intention.

We at Bright Side are ready to share with you 10 photographs that not only display the state of affairs but tell emotional stories.

On June 10, 1963, dozens of people witnessed the self-immolation of the Vietnamese Buddist monk Thích Quang Duc. He burned himself to death to stand up against the oppression of Buddhists by the South Vietnamese government. Malcolm Browne, an American journalist, captured this moment, and his photograph became a worldwide sensation and brought attention to the policies of the government. Historians believe that Thích Quang Duc’s act was a critical point in the crisis and greatly contributed to the change of power in Vietnam

"I was to see that sight again, but once was enough. Flames were coming from a human being; his body was slowly withering and shriveling up, his head blackening and charring. In the air was the smell of burning human flesh; human beings burn surprisingly quickly. Behind me, I could hear the sobbing of the Vietnamese who were now gathering. I was too shocked to cry, too confused to take notes or ask questions, too bewildered to even think... As he burned he never moved a muscle, never uttered a sound, his outward composure in sharp contrast to the wailing people around him."

This photograph, snapped by Richard Lam, went viral, and millions of people wondered if it was a passionate embrace of unknown lovers or just a deliberate set-up. Even the photographer himself had doubts about what the picture really showed. Mr. Jones, the man in the photograph, later admitted that when the police knocked his girlfriend off her feet, she became frantic, so he decided to give her a kiss to calm her down. However, despite such an unromantic explanation, this is still one of the most powerful photographs of our time and a perfect example of the "make love, not war" approach.

"I was about 20 or 30 yards away. There were these 2 people on the ground in this empty street. Initially, I thought one of them was hurt. I took a few shots, and then the moment was lost. It was complete chaos. Rioters set 2 cars on fire, and then I saw looters break the window at a neighboring department store. At that point, the riot police charged right toward us. After I stopped running, I noticed in the space behind the line of police that 2 people were lying in the street with the riot police and a raging fire just beyond them. I knew I had captured a moment when I snapped the still forms against the backdrop of such chaos, but it wasn’t until later when I returned to file my photos that my editor pointed out that the 2 people were not hurt, but kissing."

The Man Behind the Crossed Arms

August Landmesser, a German who refused to salute during a Nazi rally, is captured in this world-famous photograph. August joined the Nazi party in 1931, but 2 years later he fell in love with a Jewish woman, Irma Eckler, and proposed to her in 1935. For that reason, he was expelled from the party, and the marriage application was declined under new Nuremberg Race Laws. And so, in 1936, August Landmesser didn’t lift his arm for the Hitler salute. Later, he and his family tried to leave the country but were caught and sent to concentration camps. In 1938, August saw his family for the last time. After giving birth to their 2nd child, Irma was transferred to the "euthanasia center," where she was killed in 1942. August was reported missing during a military operation in Croatia in 1944. Their daughters survived the persecution, and one of them documented the story of her family. 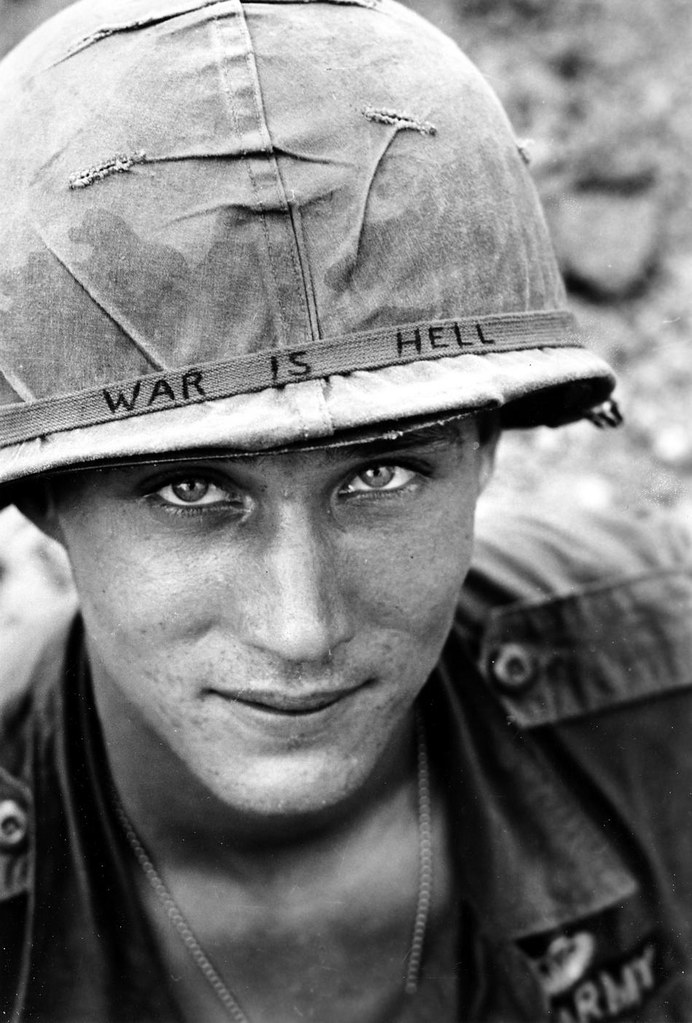 War is Hell is one of the most famous pictures taken by German photographer Horst Fass in 1965 during the Vietnam War. The name of the solder was unknown for a long time, but in 2012 he was identified as Larry Wayne Chaffin from St. Louis. The photo was taken when he was 19. His wife, Fran Chaffin Morrison, said that he had many problems adjusting to civilian life after the war and passed away at the age of 39 from diabetes complications.

During the war, it was quite common for soldiers to write messages or draw graffiti on their helmets expressing their attitude to what was going on. The "War is Hell" quote is a reference to William Tecumseh Sherman’s address to the graduating class of the Michigan Military Academy:

"I’ve been where you are now, and I know just how you feel. It’s entirely natural that there should beat in the breast of every one of you a hope and desire that some day you can use the skill you have acquired here. Suppress it! You don’t know the horrible aspects of war. I’ve been through 2 wars, and I know. I’ve seen cities and homes in ashes. I’ve seen thousands of men lying on the ground, their dead faces looking up at the skies. I tell you, war is hell."

As soon as William Biggart, a 54-year-old photographer, first heard about the World Trade Center terrorist attacks, he hurried to the buildings. He took photos of the event from various angles, capturing the devastation of the South Tower and continuing to take pictures of the North Tower while it was burning. At 10:00 a.m. his wife called Biggart, and he assured her that he was with firefighters and was safe. 20 minutes later, the North Tower collapsed on top of him. His body and photo equipment were found under the World Trade Center debris 4 days later. This is Bill Biggart’s last photograph, taken just a few seconds before the building collapsed.

"I am certain if Bill had come home at the end of that day, he would have had many stories to tell us, as he always did. And had we asked how it really was, he would have said, ’Take my advice, don’t stand under any tall buildings that have just been hit by airplanes.’ "

The photo series Children of the Black Dust: Child Labor in Bangladesh was created by the Bangladeshi photographer Shehzad Noorani. He mostly focuses on social problems in developing countries in his works. In the suburbs of Dhaka, there used to be hundreds of factories and workshops that recycled dry-cell batteries. The main working force there consisted of women and children who had to spend the whole day extracting reusable and metal parts from used batteries. Such an environment was extremely harmful to children as they inhaled millions of carbon dust particles that inevitably led to chest and eye infections.

"Like Marjina, many women bring their children to work because there is simply no other place for them to stay. The environment in and around the workshops is loaded with carbon dust and other toxic material. Young children play in this polluted area until they are tired and fall asleep, and most suffer from chest and eye infections. The sad fact is that these children have to work to stay alive; if they don’t work, they don’t eat. But that does not mean they have to be exploited."

In this photograph taken by Dutch wildlife filmmaker and photographer Hugo Van Lawick, a little chimpanzee named Flint meets Jane Goodall, a world-famous primatologist, for the first time. To avoid arousing the suspicion of Flint’s protective mother and show that she means no harm, Goodall extends only the back of her hand, turning away the fingers. Being one of the most successful primatologists of all times, Goodall discovered that chimpanzees can use tools the way humans do. The Gombe chimps use grass to hunt for their favorite food of termites: they insert it into a termite mound, and when termites fully cover the branch, they remove it and enjoy the meal. It’s interesting that Goodall had no university degree when she first went to Tanzania. But, thanks to her groundbreaking research and accomplishments, she was allowed to study for a PhD at Newnham College without having a bachelor’s degree. 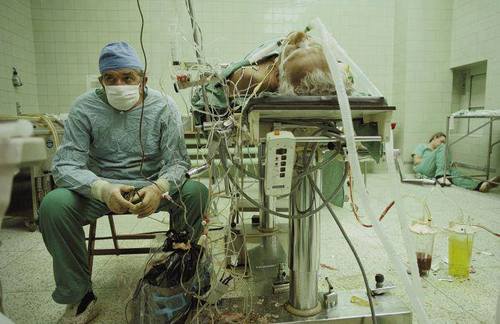 Despite protests from the church, government, and general public, Dr. Religa managed to successfully perform the first heart transplant in Poland in 1987. After 23 long hours fighting for the patient’s life, he and his assistant finally relaxed a little. In this picture, Dr. Religa monitors the performance of the patient’s brand-new heart, and his assistant is sleeping in the corner of the operating room. Dr. Religa passed away in 2009, but his patient outlived him and died in 2017, 30 years after the operation.

On August 15, 1961, 19-year-old photographer Peter Liebing was informed by the police that something worth his attention would happen. So he arrived at the Western border, where the Berlin Wall would later be constructed, and he saw a young GDR border guard trying to remain calm. 2 other guards were on the other side of the road. Nothing happened for hours, but then Schumann ran and jumped over the barbed wire.

Schumann was the first of many GDR border guards to defect from East Germany. While for some people this photo was a symbol of freedom during the Cold War, others saw him as a traitor as he left his family on the other side of the wall. Later, when Schumann spoke publicly about the reasons for his decision, he mentioned that he "didn’t want to be put into a situation where he would have to shoot someone."

"I had him in my sight for more than an hour. I had a feeling he was going to jump. It was kind of an instinct... I had learned how to [get the timing right photographing horses] at the Jump Derby in Hamburg. You have to photograph the horse when it leaves the ground and catch it as it clears the barrier. And then he came. I pressed the shutter and it was all over."

Yoina is an 11-year-old orphan who lives with her aunt in the remote Machiguenga community in Manu National Park, Peru. Charlie Hamilton James, a photographer, remembers that the girl "didn’t care much for having her photo taken, and that’s why she got a bit of attitude on the shot." According to an article published in National Geographic, the life of Yoina has changed for the worse since the photo was taken: her mother passed away a few months later after giving birth to her 9th child, and her treasured monkey died tragically.

"Every afternoon, a girl would skip through our camp on the way to the river to take her pet saddle-back tamarin for a swim; so I decided to shoot a portrait of her. Yoina was not impressed with having her photograph taken, and the tamarin hated water. To be honest, I’m not sure why she took it for a swim. It spent its whole time screaming and trying to clamber onto her head to escape the water."

Which story did you find the most fascinating? Or maybe you know an even more powerful one? Share with us in the comments!

0
0
6
0
26k
© 2014–2020 TheSoul Publishing. All rights reserved. All materials on this site are copyrighted and may not be used unless authorized by the Bright Side.