© 2014–2021 TheSoul Publishing.
All rights reserved. All materials on this site are copyrighted and may not be used unless authorized by the Bright Side.
26131-

10 Tips to Succeed at Work and Win Over Your Boss

20 People Whose Day Could Certainly Be Improved

23 Photos That Have Unique Details, You Just Need to Look a Little Closer 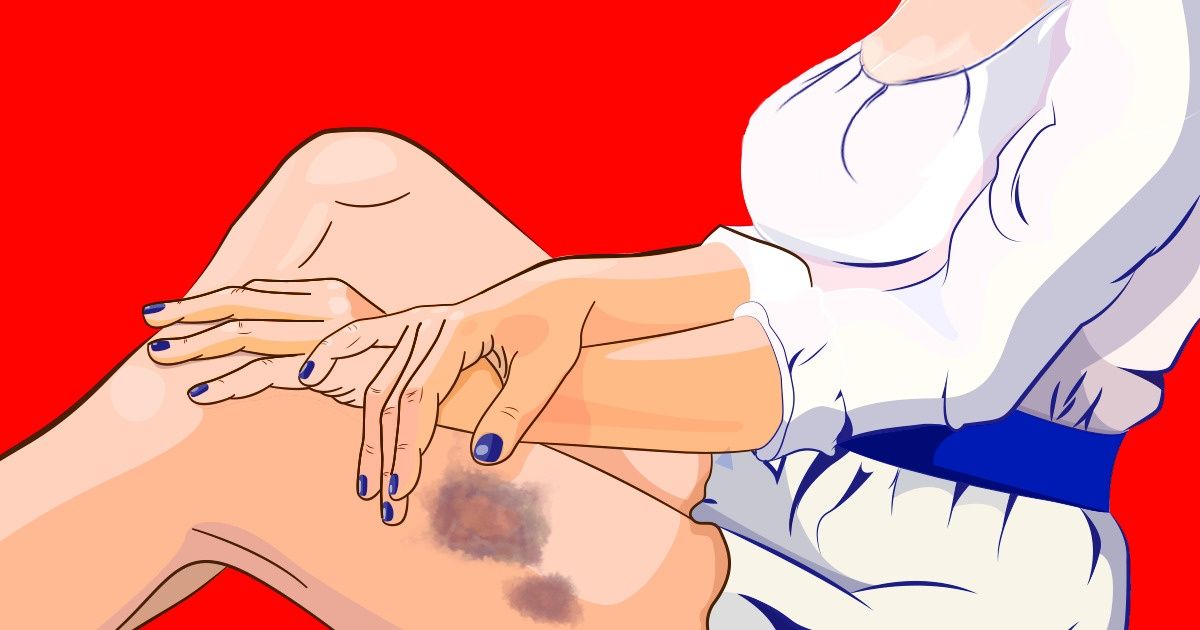 If You Have Unexplainable Bruises on Your Body, Here Are 7 Health Problems That Can Be the Reason

Bright Side has collected doctors' opinions about what can really be going on in the body if you often have bruises on your skin. Pay attention to this and consult a doctor. The specialist that deals with such problems is called a hematologist.

Lifting weights is a secondary reason for bruises. It means that is your blood vessels are already weak and physical activity only gives a final touch. However, too much of physical activity can lead to the damage of even the healthiest capillaries. For example, weight training which you are not yet ready for can be dangerous.

Even kids can get such bruises since overstuffed school bags that are barely liftable are quite common nowadays.

It is believed that such bruises are not very dangerous but it is a demonstration of the fact that you are overdoing it.

Taking certain medications which influence the blood can lead to the appearance of bruises which can vary from almost non-existent to pretty serious ones. Most of the time, they are caused by antidepressants, analgesics, anti-inflammatory drugs, iron-containing, or anti-asthmatic medicine.

The most common medication which makes the blood more liquid and can lead to bruises is aspirin.

If you have noticed the connection between taking medications and inflammation on your skin, you should see your doctor. It could be that you will need to stop taking the medicine to avoid internal bleeding.

Blood and vessel diseases can cause bruises. Varicosis, Willebrand's, thrombocytopenia or leukemia are often caused by problems with blood circulation.

Don't postpone a visit to the doctor, especially if you've noticed other worrying symptoms: pain and swollen legs, bleeding gums, small capillary spots on the body, or nosebleeds.

Vitamins, vitamins! We make sure that our kids get enough of them but we often forget about ourselves. Some unexplained bruises can be a signal that the body lacks the necessary elements.

For example, B12 takes part in blood production, vitamin K is responsible for coagulation, and vitamin C plays a vital role in the creation of new tissue. Without it, vessels become very fragile.

Another very important vitamin is P. Without it, the production of collagen is impossible, so the vessels become thin which leads to the worsening of the state of the skin.

Iron balance is very important for the body. When there is a lack of it or too much of it, capillaries get worse.

But don't rush to buy vitamins – get yourself checked for vitamin deficiency first and improve your diet.

The source of vitamin P is fresh green tea, apples, pumpkin, and garlic. Vitamin K can be found in bananas, eggs, nuts, and fatty fish. B12 can be found in liver, fish, cheese, and lettuce.

Hormonal "swings" are one of the most common reasons for bruises. They can appear if you are low on estrogen.

Such a situation is possible if you're going through menopause, if you are taking hormonal medication, or if you are pregnant. A lack of estrogen significantly weakens the blood vessels and the walls of capillaries can be very easily damaged.

A sad, but a natural reason, according to the doctors, is age. Or the wearing of capillaries. The vascular system gets weak with age and the tissues lose their elasticity.

You should notice that such "age-related" bruises mostly appear on legs. But they appear because of even the weakest impact that young skin wouldn't even "notice."

Blood and sugar are the first things which come to mind when someone mentions this disease. Diabetes has a negative influence on the process of blood circulation, so it's very easy to get bruises. And also bruises can be a symptom of this disease at a very early stage.

Other symptoms: you're often thirsty, wounds heal longer, you get tired quickly, your vision is blurry, and you have white spots on the skin.

Bonus: which bruises are dangerous and which aren't?

Most of the time, right after an injury, bruises turn red. This is the color of blood under the skin. After some time, the body starts to break the blood down and the bruise becomes black, blue, or even purple. Within 5 to 10 days, the injured area should become yellow or green. And the final stage is 10-14 days after the injury when the area becomes brown and then turns lighter and lighter.

Attention: Normally, bruises fade away completely within 2 week after the injury. So, if you see any colors different from the ones that we described or if the bruise doesn't disappear 2 weeks after you got it, you should see a doctor.

Have you ever noticed bruises on your body which you couldn't explain? What did you do about them? Tell us in the comment section below!