It's often believed that long-lasting relationships and friendships are almost impossible in Hollywood. Actors and singers have one thing in common: they're all creative personalities, and there is always an endless struggle for popularity.
However, we at Bright Side have found 11 celebrity friendships that have stood the test of time and are characterized by true devotion and sincerity.

These two handsome Hollywood guys have known each other for over 20 years. The actors met on the popular TV show The Mickey Mouse Club during the early 1990s. Gosling even used to live with Timberlake and his family because of some citizenship issues.

Kate and Liv have known each other since childhood thanks to their celebrity parents. They became super close after starring together in the movie Dr. T and the Women in 2000. Liv Tyler even became the godmother of Kate’s first child.

Pop diva Rihanna and supermodel Cara Delevingne became celebrity besties only a few years ago. The girls love to spend time together at parties, social events, and fashion shows. Due to her age and experience, Rihanna is kind of a career mentor for Cara and always supports her in the most crucial moments.

Tobey and Leo met 25 years ago when they used to go to auditions together. "After I met Tobey at an audition, I felt like I wanted this guy to be my friend. I jumped out of my car in the middle of the scene, as they were shooting practically. I was like, 'Tobey! Tobey! Tobey! Give me your number.' He was like, 'Yeah, who are you again?' " said Leo, recalling his first meeting with Tobey.

These two talented Hollywood stars met on the set of the film The Edge of Love and since then their friendship has gone beyond the boundaries of the professional arena. The actresses can spend hours together shopping or sitting in a café. Sienna recently revealed that Keira is her beauty icon and described her as "the most beautiful woman."

As frequently happens, these actors met during the shooting of the film Air America in 1990 and quickly went from being onscreen pals to real-life buddies. Downey supported Mel Gibson in his scandalous divorce proceedings, and Gibson helped Robert recover from drug and alcohol addiction.

Kim and Nicole were among the brightest of Hollywood's “golden youth." Nicole is the daughter of legendary singer Lionel Richie, and Kim is a reality TV star. They became friends when they were 12 years old, and since then they have been best friends, despite periodic reports in social media about their arguments and quarrels.

Selena Gomez and Demi Lovato met on the show Barney & Friends when they were only 7. Though not everything went smoothly in the friendship of the two young ladies - they fell apart for a while because of some personal issues - they succeeded in overcoming all the difficulties and now their friendship is stronger than ever.

Tom and Rob have been good friends since school (they got acquainted when they were 12 years old). Neither fame nor the rumors about a love triangle with Kristen Stewart could ruin the guys' friendship. Paparazzi often shoot the celebrities walking together in the park or sitting in a bar.

Though fans of these two actors really hoped that after starring in the film The Proposal (2009) Sandra and Ryan would tie the knot in real life, the celebrities announced that they were “just good friends.” Sandra is often present at Ryan's movie premieres to support her dear friend.

We can safely say that the friendship of Jen and Courtney is one of the strongest and most sincere friendships in Hollywood. The ladies met on the set of the popular show Friends in 1994 and became real-life besties. Though the actresses have gone through many difficulties (Cox’s divorce from David Arquette and Aniston's divorce from Brad Pitt), they never cease to support and encourage each other in everything. In one of her interviews, Aniston revealed, “I’ve slept in her guest bedroom a lot. All I can say is she’s been there for me through thick and thin." 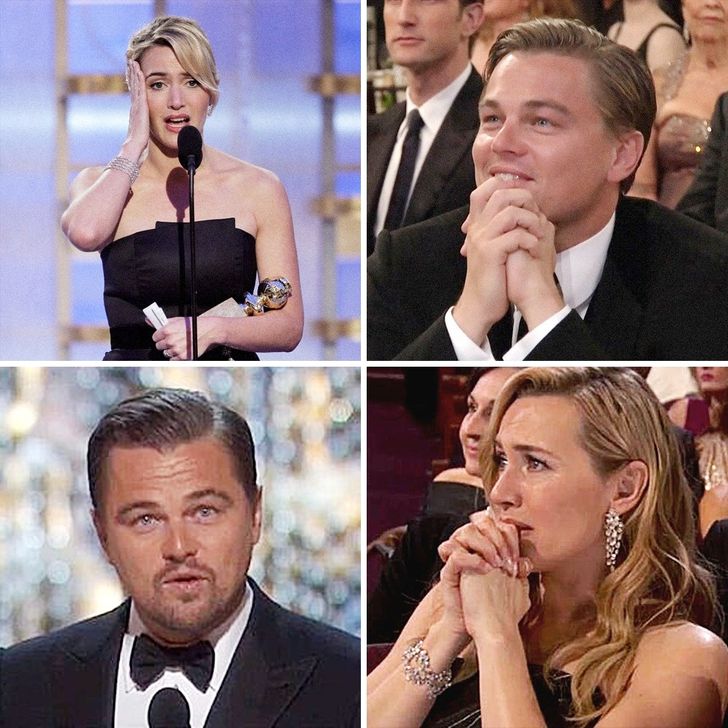 "Titanic" became a fateful movie not only for millions of its fans but for the leading actors as well. They've been good friends for more than 20 years and they're always there for each other. In 2012, when Kate secretly got married it was Leo who walked her down the aisle - a sign of trust that speaks for itself.