© 2014–2021 TheSoul Publishing.
All rights reserved. All materials on this site are copyrighted and may not be used unless authorized by the Bright Side.
12-7-

“She Is What We Prayed For,” a Firefighter Adopts a Baby He Delivered on an Emergency Call

20 People Who Broke All Wedding Formalities in the Coolest Way

15 Riddles That Only the Smartest People Can Crack 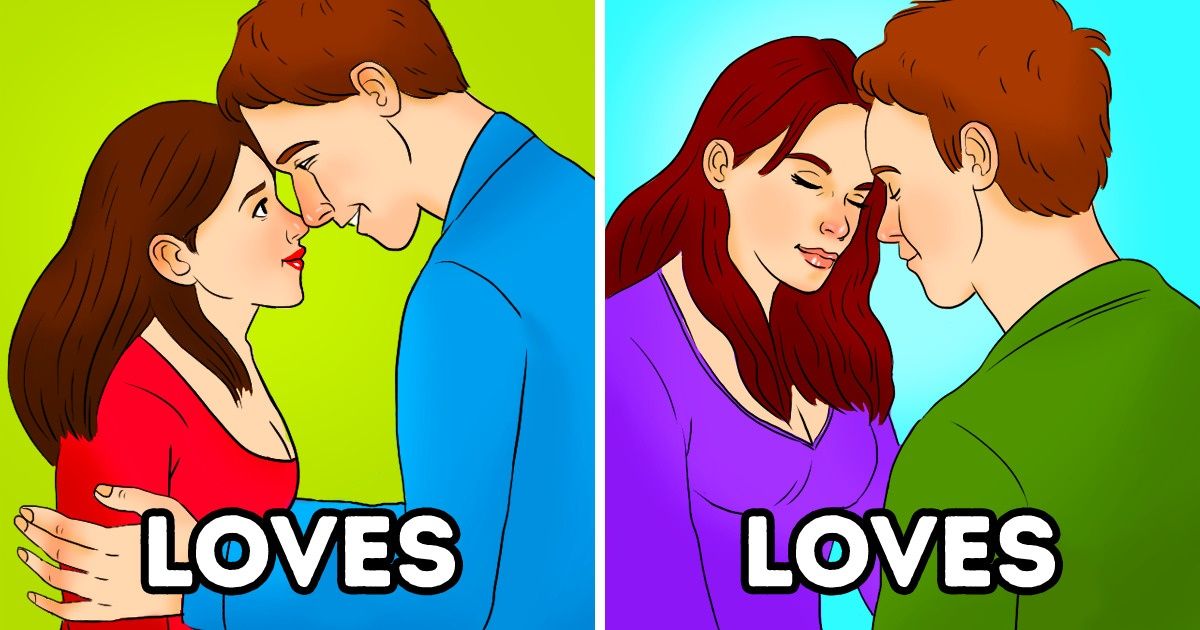 7 Things That Reveal Someone Is in Love With You (Attention: Now You Can See Through People)

It appears that love not only makes us feel elated and have butterflies in our stomachs, but it generally has a great influence on our entire bodies whether it be by blushing and sweating excessively or by going through hormonal and psychological changes. These symptoms can sometimes be so obvious that you can easily know when a person is in love with you even if they pretend to be indifferent.

Bright Side has collected some features and “symptoms” that help you realize when you’re falling in love and understand how another person actually feels about you.

It’s already known that a group of certain hormones is responsible for strong feelings. The release of these hormones makes people experience romantic feelings and passion that they can’t control very well. But men’s signs of falling in love are different from women’s.

At first, their emotional and sexual preferences match: men become more romantic, tender, and attentive because of oxytocin, while women experience a burst of energy and a high sex drive because of testosterone. But unfortunately, when the level of hormones returns to its normal state, women feel a lack of attention and men miss the number of intimate moments.

The changes in our bodies don’t stop when the period of passionate love ends. For example, our voice still changes. According to one study, when a woman speaks to her beloved, her voice unconsciously gets softer and higher. On the other hand, other research revealed that women can manipulate their voice pitch making it lower with more vibrations to be more attractive.

But the thing is, men unconsciously prefer women whose voice pitch is high and “womanly”. It’s all about our instincts: such a voice indicates that a woman is caring and reliable, and is ready for a long-term relationship. A lower voice attracts men only physically as it’s mostly about sexual interest.

A guy or girl of your dreams comes into your life, smiles at you, and passes by. It may not seem like something special but your cheeks are already red and you can’t do anything about it.

Modern psychologists found out that blushing is actually useful and can make you more likable. According to one theory, it’s a natural reaction to the fear of being “found out”. Psychologist Ray Crozier has interviewed many people about situations that cause them to turn red, and he found that it most typically involves the potential exposure of something private, not connected to embarrassing situations. The blushing may be a physiological reaction to the shock that your secret could become public. But how can this cause an attraction to another person? It’s easy: in such cases, your reddened face shows that you want to avoid excessive attention, giving the impression of a shy and less narcissistic person. And if we consider the fact that blushing is uncontrollable, we may say that it’s one of the most reliable features of honesty.

Here’s some good news for men! Studies at the University of California in Los Angeles show that married men and men in long-term relationships (especially those who are older than 25) have stronger and healthier bones. But here’s one important takeaway: a relationship or marriage is happier when a woman is caring and supportive. During this trial, it was found that if a woman wasn’t tender and loving, there was no high bone strength revealed.

Eyes play a really important role at the beginning of a relationship, and the eyes’ changes and movements are the most reliable signals when it comes to understanding our mood while spending time with our beloved.

Scientists have already proven that pupil dilation depends not only on light but on our emotional state as well. That’s why loving people look into each others’ eyes: they’re unconsciously trying to see if this can be seen in the person they’re in love with.

Confusion, nervousness, mood swings, loss of appetite, and fatigue are also on the list of symptoms that are caused by falling in love. Our bodies let us know that we’re plunging into really strong feelings.

Cortisol, a stress hormone, can be one of the reasons for our suffering because when a person is falling in love, they experience lots of emotions and great stress. For example, blood vessels in our stomach constrict and we feel nausea. As a rule, all unpleasant symptoms go away when our relationship becomes more stable and there’s no more uncertainty. But sometimes these feelings can come back like during a wedding or if something goes wrong in a relationship.

You’ve probably heard about people doing impossible things in emergency situations: mothers have lifted cars with their own hands to free their child.

The things is, love and fear literally give us superpowers. And it happens to more than just parents, it’s also present in people in love. This is due to the oxytocin that is released into our systems when we fall in love and it can actually increase our tolerance for physical pain. That’s why people experiencing this strong and beautiful feeling think that they’re able to do anything for their beloved.

How do you usually realize that you’re falling in love? Share your thoughts with us in the comments.