16 Creatures That Have Abilities People Can Only Dream Of

You don't need to go to other planets to be amazed by the variety of lifeforms. Evolution has a very rich imagination and, thanks to it, there are squeaking dragons, animals with poisonous armpits, and newts that fire ribs at their enemies and just grow a new rib later. If these "superpowers" aren't enough to impress you, keep on reading!

Bright Side has collected 15 funny animals, birds, and reptiles that can make an unforgettable impression on you with their innate features and acquired talents.

16. A gastropod that has actual armor 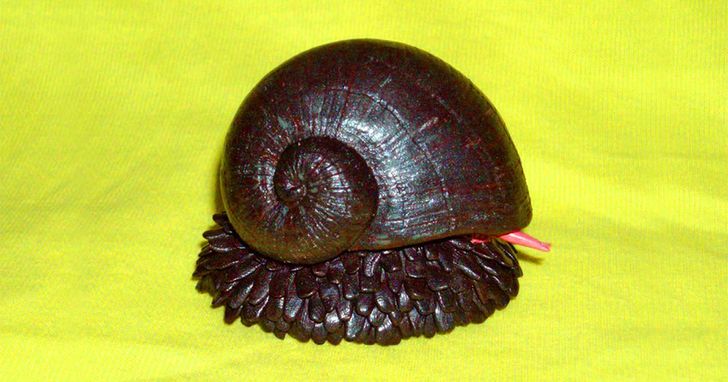 Did you know that about 95% of life underwater still remains a mystery? The Chrysomallon squamiferum is a type of snail that lives deep down where it needs real defense mechanisms. This gastropod developed actual metal armor to protect itself from being overheated by the Earth's magma.

15. A butterfly the size of a bird that has no mouth and thinks about reproduction instead of food 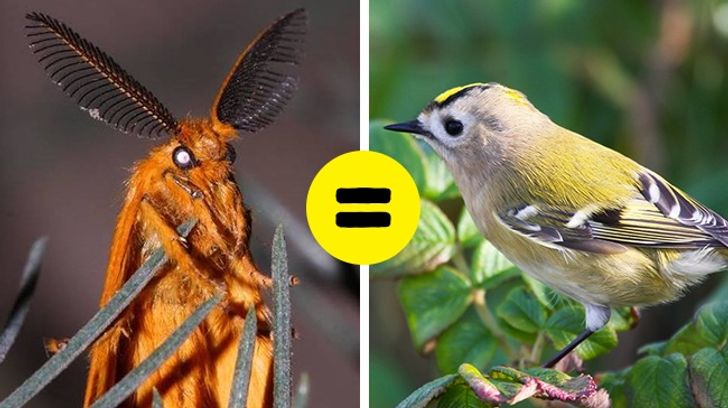 This is an example of the family of lepidoptera. These are some of the biggest butterflies in Europe and they are easily confused with birds and bats.

After turning into a butterfly, they live just a few days to find a partner for reproduction. Evolution didn't give them a mouth so there is no way for them to eat food to live longer.

14. A squid that looks like a pig and swims upside down

This is a piglet squid and it is really positive. It swims upside down and that's why the mouth is above the eyes and next to the tentacles. This squid lives in the deepest parts of the ocean and it swims popping up and down while letting water out through its nose.

13. A Tasmanian devil shows indecisiveness by opening its mouth. It also stores most of its fat in its tail. 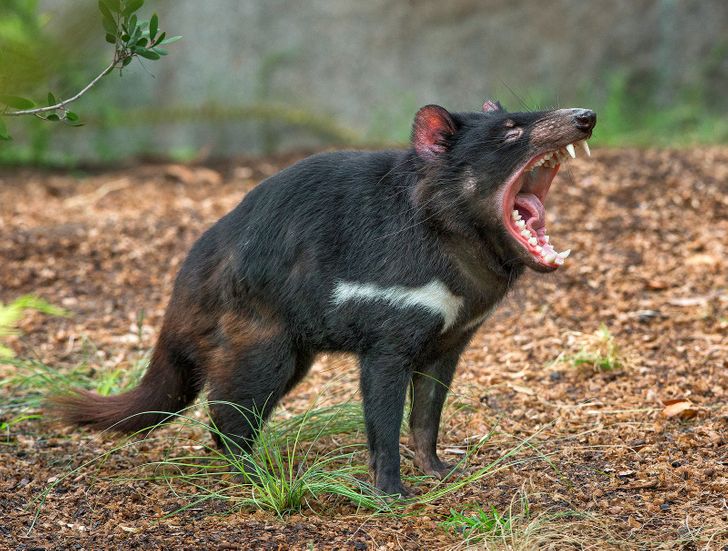 A Tasmanian devil opens its mouth to show fear and indecisiveness and it stores its fat in its tail. It was named a devil because of the terrible howl it makes when it sees an enemy.

12. A spider that hires frogs to protect its eggs. Sometimes, the spider lives together with them. 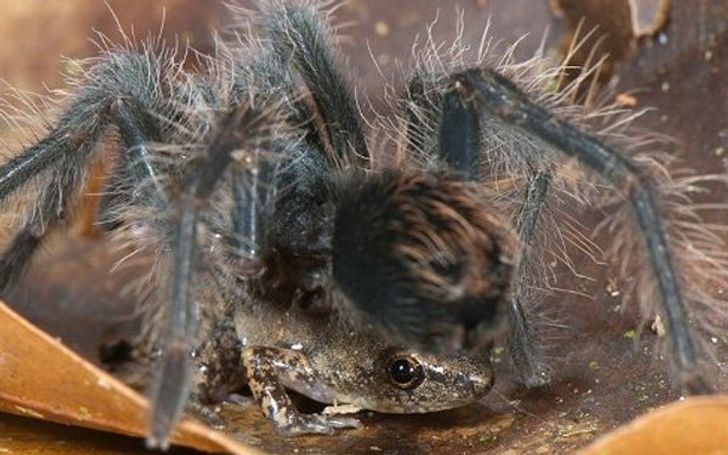 These guys work together. The giant spider guards the frog and shares food with it and the frog defends the spider from ants that hunt it. Some "couples" even live in one house and lay eggs together.

11. A fly that has a diving suit to hunt underwater where almost everything dies 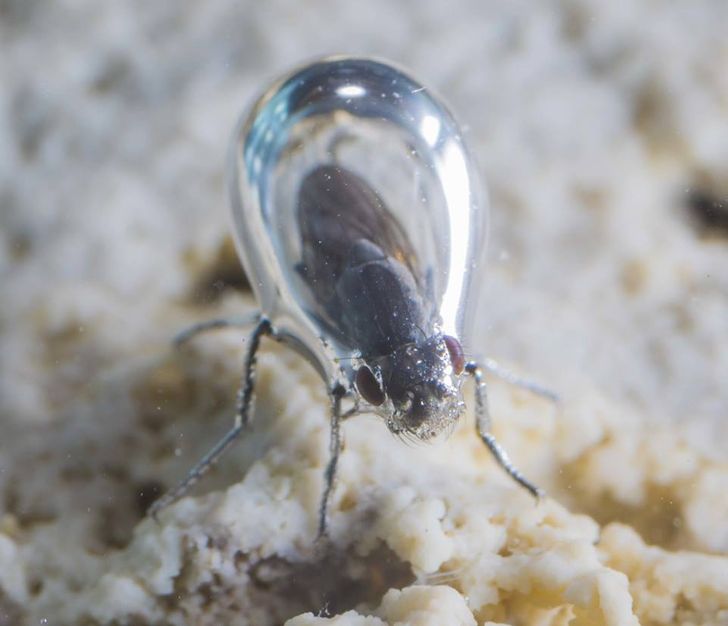 This fly has fur that keeps more air. So, when it dives, there is a suit made of air around it that allows the insect to eat seaweed in extremely salty lakes. Due to such extreme environmental conditions, only seaweed, small crabs, and such flies can live there.

10. A sloth that grows seaweed on itself and then eats it 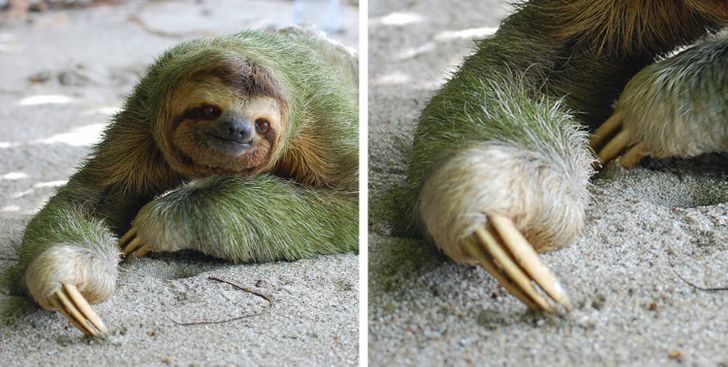 This seaweed is often confused with moss. It's actually the sloth's fur that turns green. There are moths living in seaweed that give nitrogen to plants. Once a week, a sloth comes down from the trees and leaves manure that contains moth eggs on the ground. Later, the moths fly to the sloth's fur and help grow seaweed that the animal sometimes eats. What do you think of such an interesting "business" deal?

9. A crab without claws that has poisonous things that it can throw at its enemies 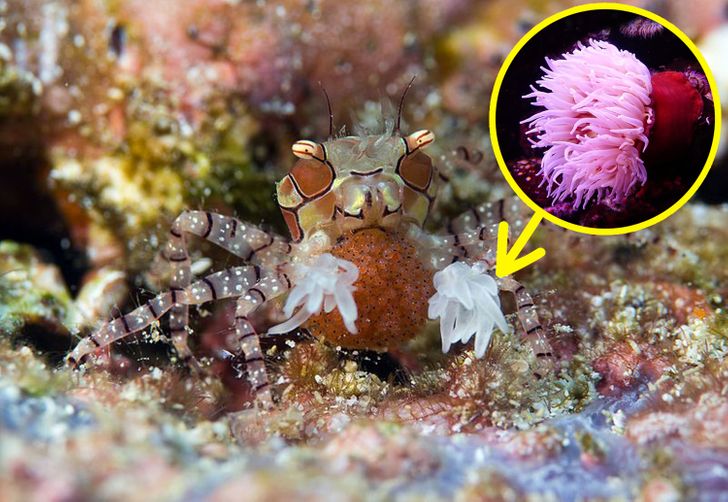 This crab doesn't have big claws and that's why it picks up poisonous anemones and waves them at its enemies like a boxer. For anemones, this cooperation is beneficial: with the crab, they easily get food and find new territory.

8. These green balls are the eyes of the fish: 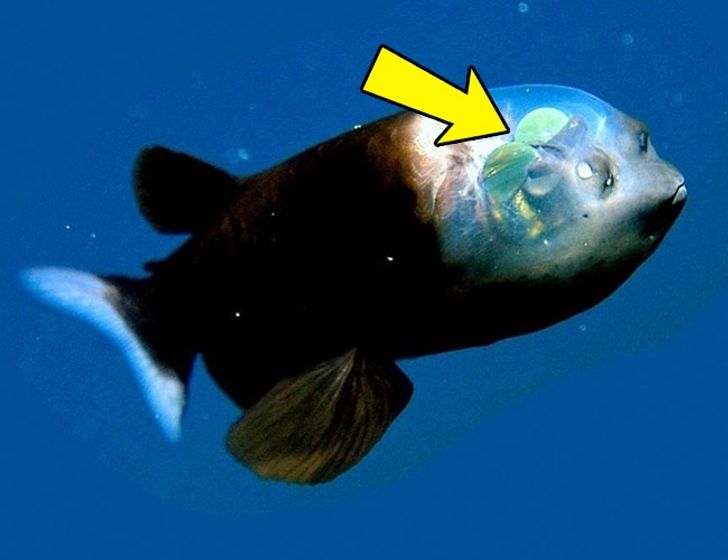 7. A slow loris licks its poisonous armpits and spits the contents onto its enemies. 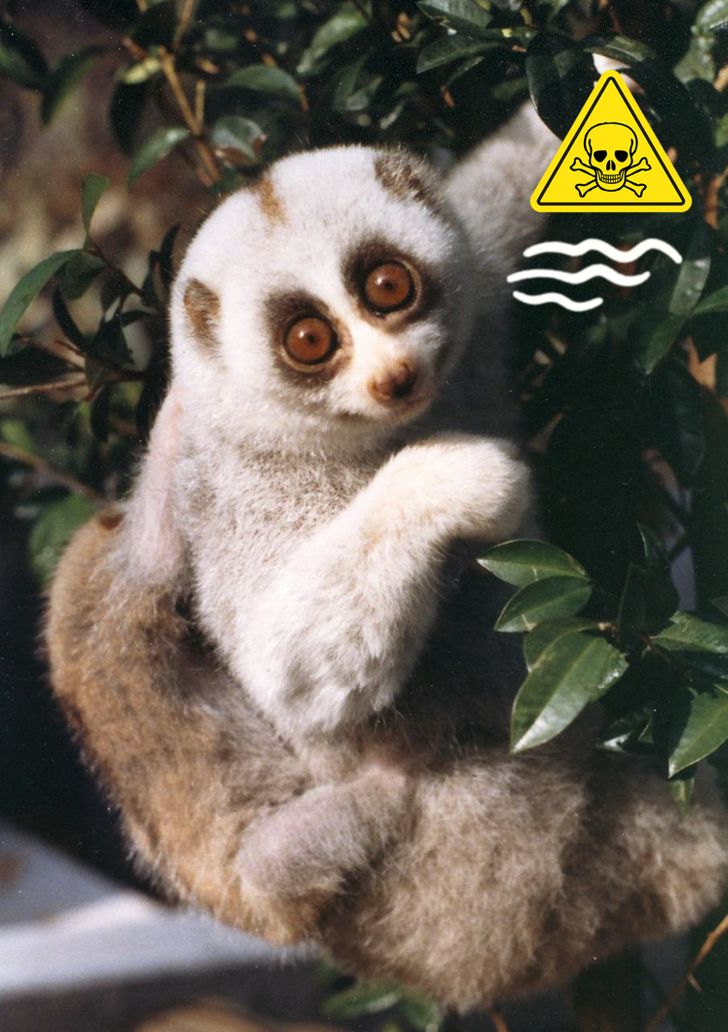 As soon as a slow loris senses danger, it emits a special transparent liquid. The animal puts the liquid on the fur, mixes it with saliva, and prepares to bite its enemy or to spit at it. The toxin causes a strong allergic reaction. 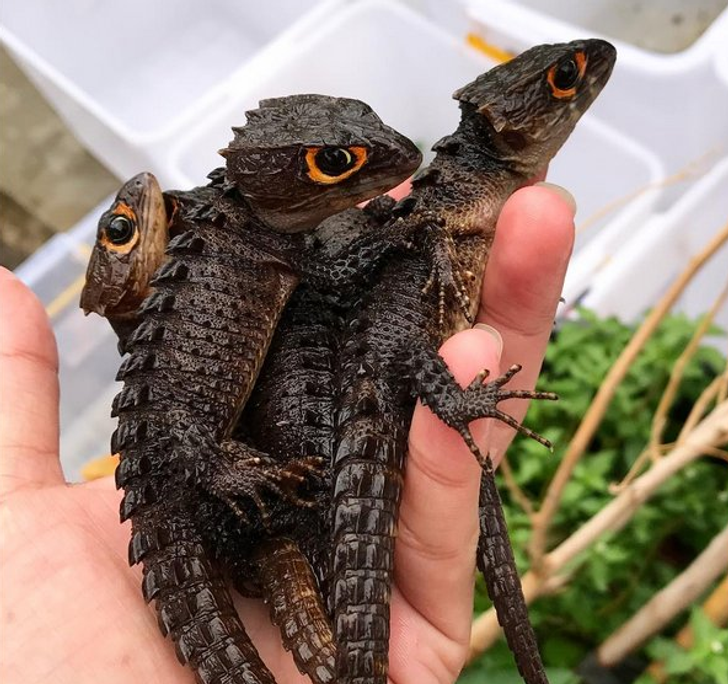 This a crocodile skink became extremely popular after the beginning of Game of Thrones. The reptile makes a loud noise (similar to that of a rubber duck) to scare away its enemy. Another strange thing about the skink is that it drinks by putting its entire head underwater.

5. A burrowing owl lives in underground burrows and hides in manure.

A burrowing owl takes someone else's underground burrow and puts lots of fresh manure next to it. This bait attracts bugs that the owl eats without leaving its home. An incredible behavior that developed through evolution. No wonder owls are known for being wise!

4. A ribbed newt shoots its ribs into its enemies. And then it grows new ones. 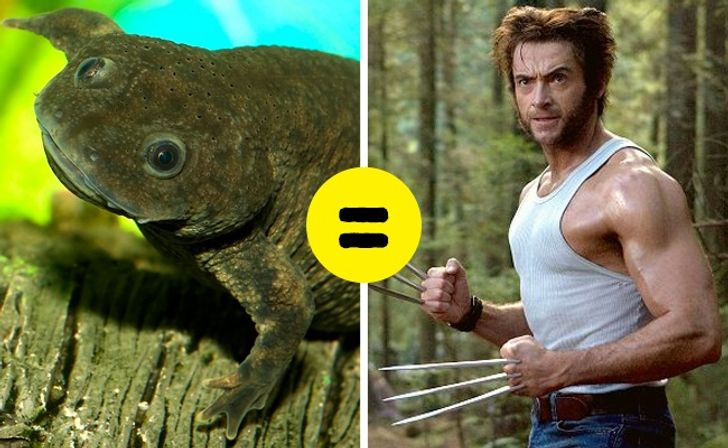 The special features of a ribbed newt almost make it the prototype for Wolverine from X-Men. In case of danger, it can shoot sharp tips of its poisonous ribs at its enemy. 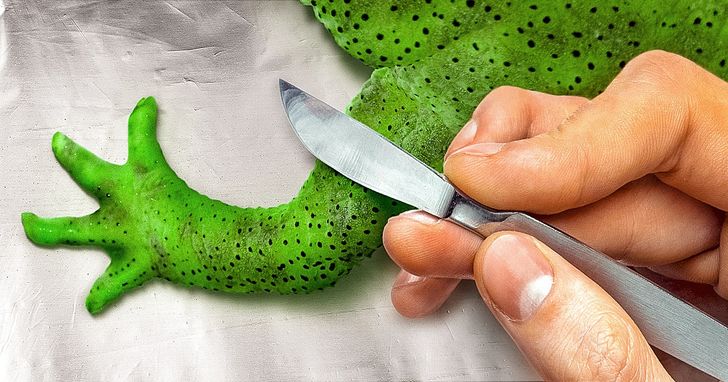 And it can also regenerate organs and tissue, including parts of the brain. More than that, if it loses a limb, it can grow a new one!

3. A pelican doesn't have nostrils. It breathes through its mouth which can hold many liters of water. 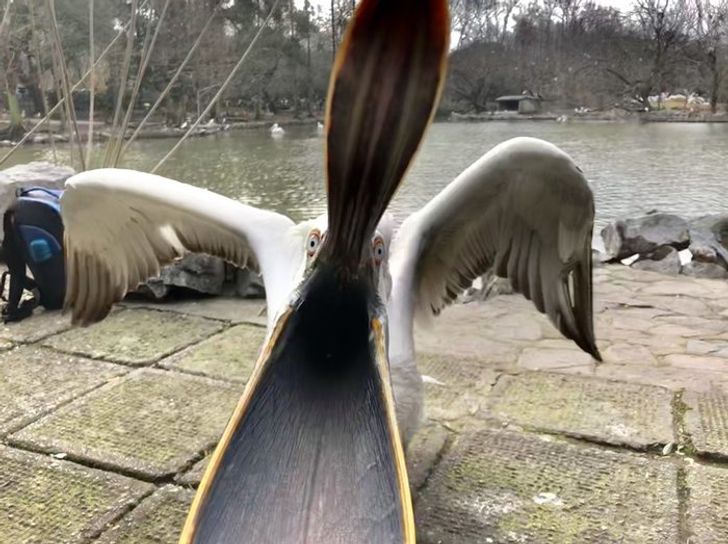 Once it catches fish, the bird pours the water out and eats the prey. Around 30 liters of water can be kept inside a pelican's beak. It looks absolutely incredible!

2. Dolphins used to walk on the ground and now they use their own language to communicate. 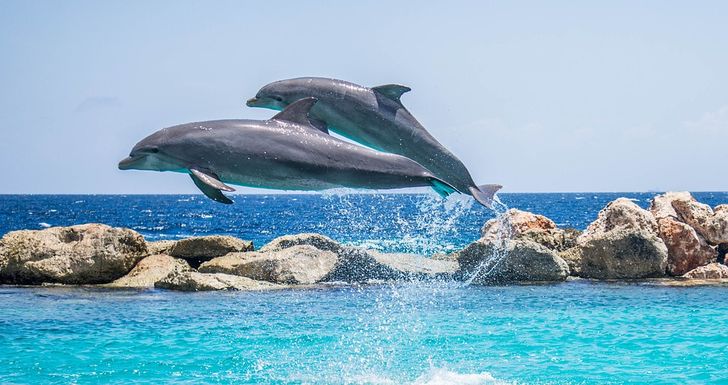 Dolphins use a language with complicated grammar, they have names for each other, and their flippers used to be legs to walk on the ground. Many scientists say that dolphins should be considered our equals in terms of intelligence.

1. A shoebill has 3D-vision and often freezes without moving for hours. 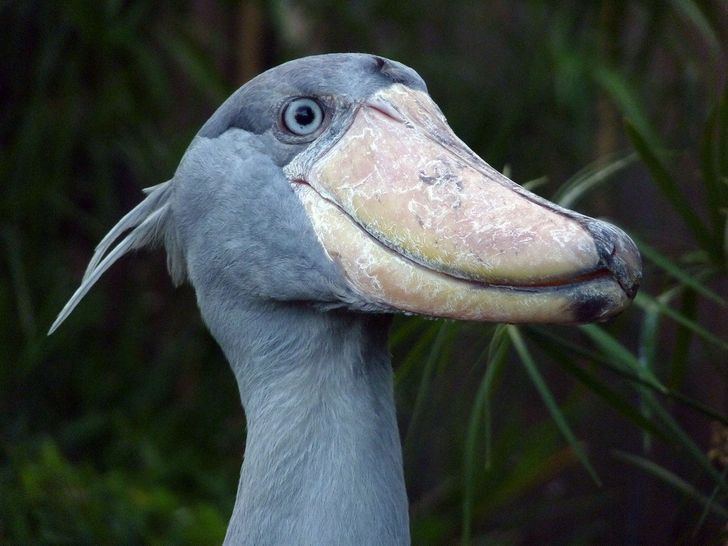 A shoebill is a huge bird that looks more like a feathered dinosaur with a crazy stare. Many habits show that this bird is a descendant of the extinct reptiles: shoebills can spend hours being completely still, they spit water on eggs to cool them down, and they see the world in 3D thanks to the unusual positioning of its eyes.

What strange and unusual animals have you seen? Tell us in the comment section below!