18 Facts That Could Turn Your Whole World Around

There is so much about the world we live in that is still a mystery to us. We have no idea about the extinct animals that inhibited our planet millions of years ago and we have no clue how many peculiar sightings there are.

We at Bright Side collected 18 images of the most puzzling things Earth has to offer, whether it’s the world around us or our own body.

1. Mammoths lived for multiple centuries after the Great Pyramid of Giza were built.

Mammoths finally disappeared from Wrangel Island, their last habitat, about 3500 thousand years ago, just 500 years before the arrival of man. At this point, the Egyptian pyramids had already existed for around 500-600 years. The last mammoth disappeared during the reign of Tutankhamun.

Marie Curie, or as she is often called, “the mother of modern physics,” died of aplastic anemia. She became ill with this rare disease, associated with contamination by radioactive substances, during experiments that helped to discover polonium and radium.
More than a hundred years have passed and the personal belongings of the famous scientist are still contaminated with radioactive substances. They are considered to be the national treasure of France and are kept in lead-protected boxes at the National Library in Paris.

The human spinal cord, which averages 44 cm in length, is made up of approximately 13.5 million neurons. All messages, transmitted from the brain to other parts of the body and back, pass through the spinal cord.

4. This is the largest flower known to humans. 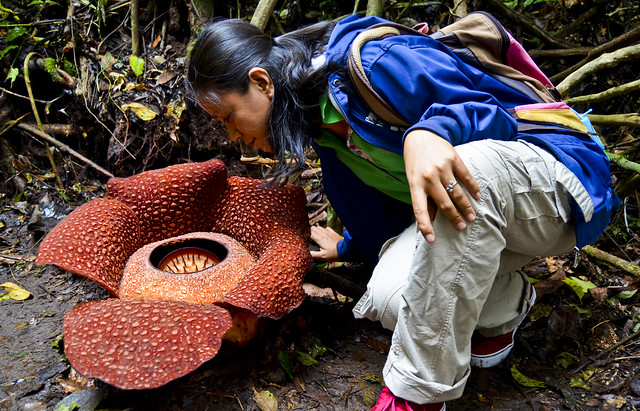 Its name is Rafflesia and it looks like a painting. It doesn’t have leaves, roots, or even a stem. It’s actually a jungle parasite that can grow up to a meter in diameter.

5. This river boils for no reason.

Shanay-Timpishka is a tributary of the Amazon called “the only boiling lake in the world.” Although the length of this river is only 6.4 km, it’s known for its high temperatures ranging from 45°C to almost 100°C. The name Kampa means “Warmed by the heat of the sun,” but most likely the root cause of the temperature is a geothermal spring.

6. The earth is not bleeding here.

This phenomena, called Blood Falls, is located in Victoria Land, East Antarctica and the water looks like this because of all the iron in it.

7. Deep sea fish are not to be messed with.

This, for example, is Sloane’s viperfish and it can’t close its mouth because of how gigantic its teeth are.

Pretty sure that’s not what it actually looks like.

9. This lake gets around 150 days of lightning per year.

This is Lake Maracaibo and the Catatumbo lightning in this area is thought to be the largest single-generator of tropospheric ozone on Earth. Winds coming from the Andes cause thunderstorms. Methane, which the atmosphere of these swampy places is rich with, rises to the clouds, feeding the lightning.

This tree grows in Falls Park on the Reedy in Greenville, South Carolina, and it’s the best example of the way trees grow their roots down into the earth.

11. This is a natural gas field and absolutely not “The Door to Hell” in Turkmenistan.

This hellish place looks like this because of the never-ending burning of this gigantic gas crater.

Here you can see seeds that are not in our usual bananas. Also, the banana skin on wild bananas is much thicker and harder to peel.

13. This hot spring in Japan is called the Hells of Beppu.

The onsen (hot spring) in this picture is in Chinoike Jigoku, one of the 7 “hells” of Beppu. The reddish color comes from the red clay at the bottom of the spring.

14. Titanoboa is the longest snake to have ever lived on Earth.

It could grow up to 15 meters in length (compared to the biggest snake of our time, the python, that can only grow up to about 7 meters) and could weight more than a ton.

15. These random fireballs appear to rise from the water in Thailand.

This phenomenon lies in the fact that glowing balls rise from the depths of the river, looking like reddish chicken eggs. The balls rise for 10-20 meters above the river and then disappear.

16. This is the oldest color in the history of Earth and yes, it’s cotton-candy pink.

This color was found in the rocks of the Sahara Desert and it ranges from red to deep purple when concentrated, but goes to bright pink when diluted.

17. Christ of the Abyss is a sunken bronze statue located in the Mediterranean Sea, not far off the coast Italy.

It was placed at the bottom of the sea almost 70 years ago in honor of the first usage of scuba diving gear in Italy.

18. Oxford University is older than the Aztec civilization.

Oxford was founded in 1249. The founding year of the Aztec city-state of Tenochtitlan is 1325.

If you have other mysterious and peculiar pictures to share or suggest, please do so in the comments below.

0
0
1
0
25k
© 2014–2020 TheSoul Publishing. All rights reserved. All materials on this site are copyrighted and may not be used unless authorized by the Bright Side.