27 People Show What It’s Like to Live in Extreme Weather Conditions, and It’s Not for the Faint-Hearted

From melting slippers and popping corn on the cob during a heatwave to completely iced out faces and vehicles in impassable snow — weather continues to baffle us! This might seems like unbearable chaos to some, but others have learned how to deal with it. No weather condition can hold them back from watching their favorite game, going grocery shopping, or cooking — they even seem to find beauty in it. Would you be able to do the same?

Bright Side continues to be amazed at how powerful nature can be and how people manage to adapt to their surroundings. Here’s our list of 27 photos of extreme weather, and we’re sure they’ll make you feel very cold or super hot!

1. These fans are so hardcore.

2. Consequences of Hurricane Mattew in Daytona

3. Effects of the heatwave in France

5. A resident from Texas protects his car from hail with pool noodles.

6. An Australian man shopping for essential groceries during flooding and severe storms

7. Clearing a telecommunications tower after a snow storm

8. It’s a bit hot in Australia during the summer...

9. Driving a car in the North Pole might be a bit tricky. 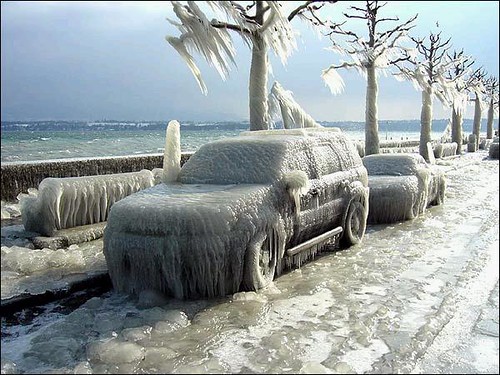 10. This ceiling fan in Puerto Rico got so hot, it melted.

11. When it’s so cold that even your face and clothes completely freeze:

12. A wild sinkhole in Chicago due to flooding

16. Over 13 ft. (4 meters) of snow at this Riksgränsen ski resort in northern Sweden

17. A cedar tree after a storm in central Kansas

18. “Took advantage of the heat in Scottsdale and baked cookies in the car.”

19. A frozen bicycle after a winter storm in Chicago

20. Hail damage to a sunroof

21. This plastic mailbox melted due to Arizona heat.

25. This car just melted due to heat.

26. “It’s so cold in Canada that this bus just split in half in front of me.”

27. “When you’re flooded but don’t want to get electrocuted”

Which photo amazed you the most? Is the weather extreme or mild where you live? Do you have some interesting photos of it? Let’s share pictures in the comment section!

12
0
18
5
91k
© 2014–2020 TheSoul Publishing. All rights reserved. All materials on this site are copyrighted and may not be used unless authorized by the Bright Side.