© 2014–2023 TheSoul Publishing.
All rights reserved. All materials on this site are copyrighted and may not be used unless authorized by the Bright Side.
22-8-

Photos That Show the Evolution of 10 Celebrities Over the Decades

What do you imagine is served for lunch in one of the best restaurants in the world? That was a question that a student from Australia, the hero of this article, asked herself. When she came to San Francisco, she spent $600 in California's most expensive restaurant and shared her impressions and her photos with the users of Imgur.

Bright Side invites you to go on a small gastronomic tour. Of course, the photos cannot replace the real experience but they can probably inspire you to cook something unusual for dinner tonight.

Meet the girl. She is registered with the nickname Hoptail on Imgur. In her post she wrote, "I am often called well-off but I really like good food and save up for it."

In 2014, the restaurant Saison got the highest rank of the year - 3 stars from Michelin, which means "exceptional cuisine that is worth a special journey."

And this is the view from the top. The firewood is part of the restaurant's concept as most of the dishes are cooked on an open fire or in an oven lit by the firewood. The chef avoids buying imported goods and buys products from local fishermen, hunters, and farmers.

So let's start with the tea! Each little bushel has yarrow, chamomile, hyssop,
lemon balm, Douglas fir, and anise. And they all are picked fresh from the restaurant's farm and steeped in hot Meyer lemon water. The girl claimed it was "The most heavenly tea I've ever had in my life and could quite cheerfully drink this every day until I died."

Then came the dish from baby spinach, kelp, and caviar. The baby spinach leaves are torn off at an early stage of growth, so they have a delicate taste. The kelp is roasted in clarified butter that is made from the milk of Bella, a cow living on the restaurant's farm. And the proprietary caviar is salted according to a special recipe, using smoked salt.

The girl shared her impression of the dish, "Even though all the textures were super different, they came together so smoothly."

This is sashimi from turbot fish - a species of flatfish. Thinly sliced raw fish pieces were so gorgeous that Hoptail was taken aback, "I shed tears knowing that I'd peaked and would never experience better raw fish after this moment." She was also served another preparation of the same fish - grilled with a light soy glaze and decorated with physalis. 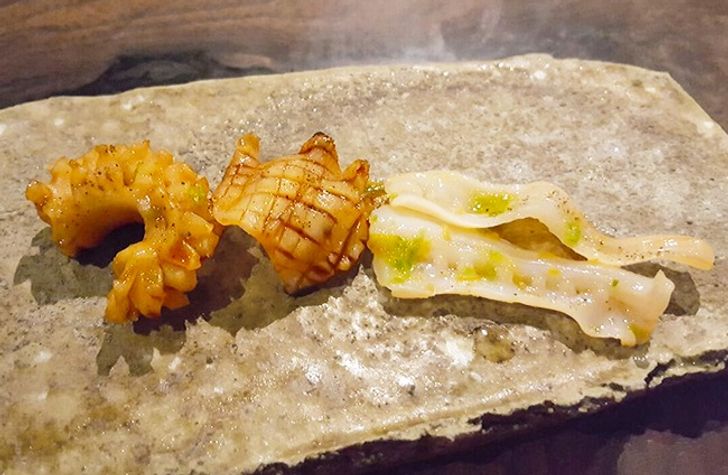 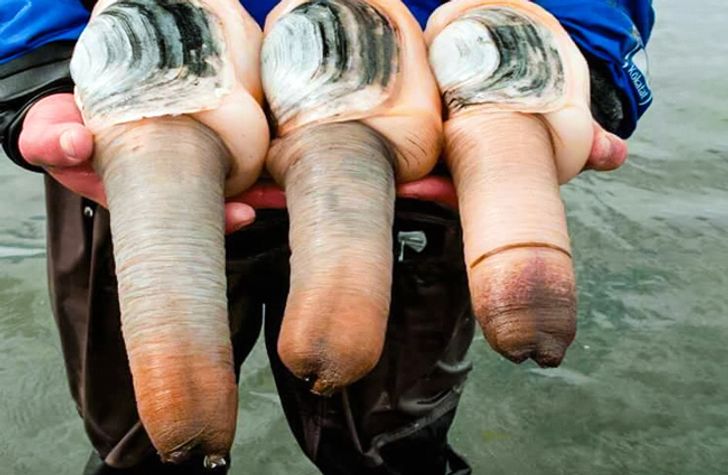 Afterward came Geoduck. You can click on the image to see how it looks in its raw form. According to the girl's opinion, the dish wasn't that good. It was just kind of chewy and the marinade was super overwhelming due to which she couldn't actually taste the meat itself.

Another dish that impressed the girl was fresh sea urchin on grilled bread that was basted in a sauce made of the offcuts of the bread. However, she is not the only one who gave this dish great reviews. In numerous reviews about Saison, the sea urchin gets the most appraisal.

After came thinly sliced radish with clarified butter on top. Underneath there were cubes of marinated radish, the radish tops, and a sort of radish jelly vinegar reduction. It was a really good transition from the creamy sea urchin to the bitter taste of radish. By the way, the compatibility of dishes on the menu is thoroughly thought through by the chef of Saison.

Then they brought 3 kinds of roasted pumpkin. The first kind was topped with octopus flakes and the second was topped with buttermilk cream. Both of the dishes were amazing. However, the third one, pumpkin puree in cold-pressed pumpkin seed oil, was too salty and not as tasty.

You're probably thinking it's time for dessert. No, it's time for meat dishes now. The first one was medium rare antelope meat stuffed with radicchio and herb salad. These were all complemented with biscuits and honey butter. According to the girl, the fillet of antelope meat resembled the taste of something between venison and beef.

After that, they served antelope bone broth with sage which was very delicious and packed with flavor.

Finally, dessert! At first, it was smoked ice cream.The technology of the preparation, of course, is not revealed in the restaurant. The ice cream is served with salted caramel that ended up splitting the girl's life into before and after.

Together with smoked ice cream, they served candied cocoa nibs, peanuts, walnuts, and pine nuts. It was very, very tasty.

Then came something really smooth and creamy and it had hidden segments of candied oranges at the bottom.

Afterward, it was time for blueberry sorbet with brandy-macerated blueberries and more brandy on top. You'll like the dish if you are a fan of brandy because the dish has quite a lot of it.

Now for the cherry on the cake: another dish that this restaurant is famous for is a chocolate bar resembling "Snickers" that is topped with gold. The chocolate is cooked in the restaurant using the same salty caramel.

After a 4-hour lunch, the girl was presented with some nice souvenirs. She wrote, "This was an awesome experience and, for me, well worth the money." Apart from the good food, Hoptail noted the mesmerizing atmosphere of the restaurant, the unobtrusive service, the amount of free space, and the flavors of nature in the air. All of this was complemented with music from the ‘70s-‘80s.

Our gastronomic tour has come to its end. Have you calculated how many dishes you can eat in one of the best restaurants in the world for $600?