Sci-fi writers often write stories about groups of people that live in an isolated space and produce everything they need for a normal life all by themselves. This experiment was actually conducted in real life. The goal was to find out if people could create biospheres on other planets and live in them. In 1991, a group of people was placed under an isolated dome. But the reality turned out to be much more unpredictable than the fantasy.

We at Bright Side got interested in this unusual experience and found out what happened behind the closed doors of the dome.

In 1987, in the middle of the Sonora desert, in Arizona state, a huge construction process started. 4 years later, when the construction was over, huge futuristic-looking buildings made of glass and metal appeared. They were built so that no air would get inside or get outside of the buildings. This allowed them to imitate conditions similar to other planets, where people can’t live outside.

Both the buildings and the project were named Biosphere 2. These futuristic buildings were supposed to be the second self-regulating system after Earth (the planet itself is Biosphere 1). The tightness of the system was so well-constructed that its seams let less air out or in than the seams of the International Space Station.

The basic systems were underground. There were pipes with circulating water for heating and drinking and also there were giant “lungs” that had to compensate for the compression and extension of the air when it heated up during the day and cooled down during the night. Besides, in order to prevent any penetration from the outside (except for the sunlight), all the buildings were isolated with specially made sheets of thick metal that weighed around 50 tons.

Inside, the building was split into 7 areas called biomes. Every single one of them had different conditions that are present on Earth: rainforest, foggy desert, mangrove wetlands, ocean with a coral reef, and savannah. There were 2 anthropogenic biomes one of which included a human habitat and the second one was an agricultural system for growing food.

On September 26, 1991, a group of 4 men and 4 women, entered the doors of Biosphere 2. Together with them, there were about 3,000 kinds of animals and plants, including trees and insects. The Biospherians — this was the name of the participants — had to provide food for themselves, which is why they planted rice, sweet potatoes, beets, bananas, and papayas. No chemical fertilizers were used, because they could have a negative impact on the health of the isolated people.

Dr. Roy Walford, who was one of the participants of the mission, created a diet that was 83% plant-based. At the time, he was working on trying to extend the lifetimes of the people involved. Interestingly, the diet that consisted mainly of sweet potatoes had a very interesting effect on the participants: one of them, Jane Poynter, developed orange skin.

And rarely, maybe about once a week, the team ate chicken, meat, or fish. The chickens were bred in the agricultural biome and the fish were bred in the ocean biome. Jane Poynter remembers that all the members of the mission licked all their plates in order to not lose any nutrients. 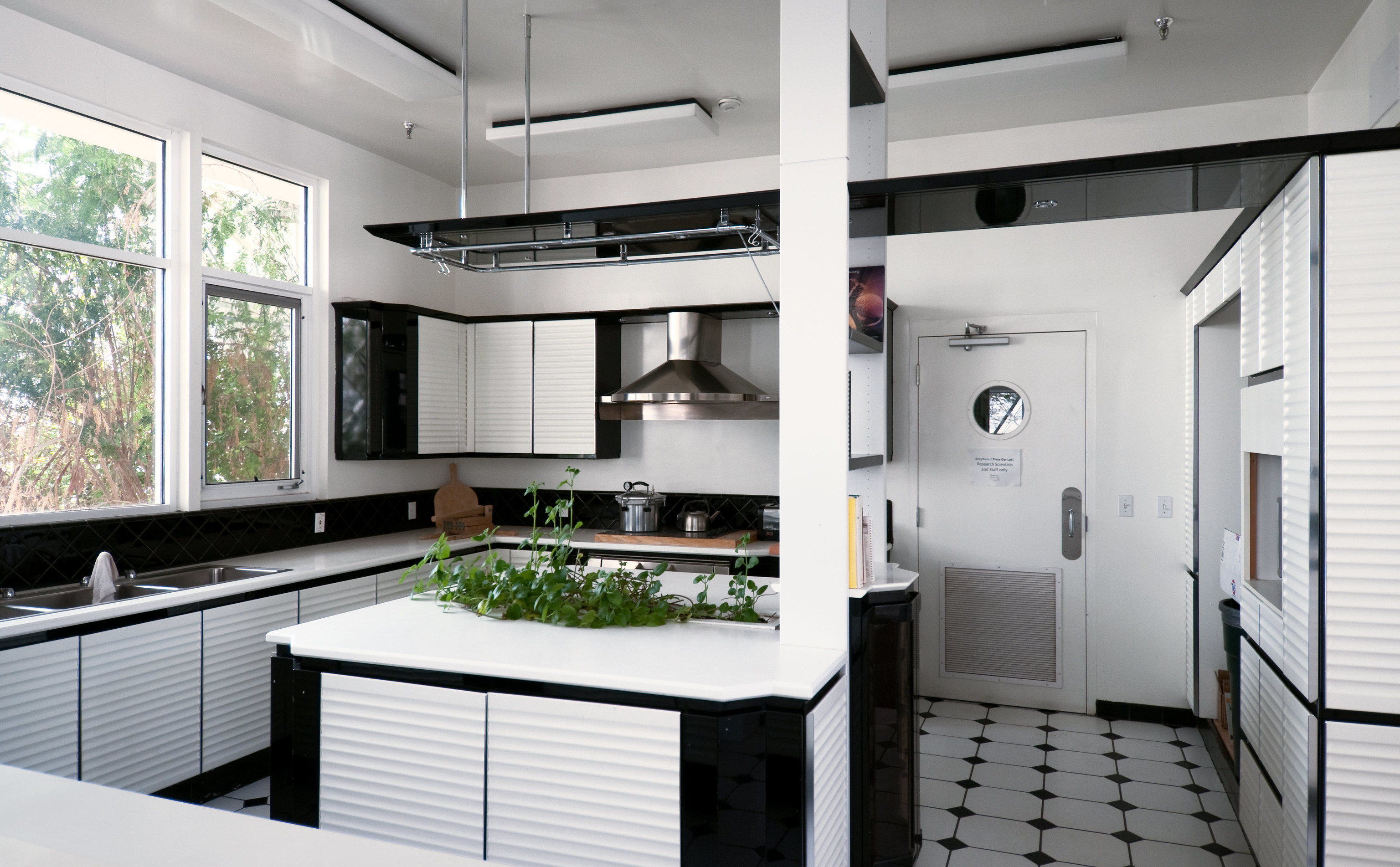 The kitchen of “Biosphere 2”

Even though during the first year of the mission, all the participants complained about being hungry and lost about 1/6 of their body weight (and one of them, Taber MacCallum, lost 59 lbs), after the end of the experiment, it was found that the health indicators of all the participants had improved. By the second year under the dome, their weights stabilized, even though they were still quite hungry most of the time. Besides, the medical tests conducted outside of Biosphere 2 showed that the metabolism of every single participant had improved.

It is interesting that almost 2 years of a vegetarian diet changed the digestion of the mission members. Because they didn’t have a lot of meat in their diets, they lost the ferments that digest meat.

But the isolation wasn’t as healthy for the animals and the plants. Most of the vertebrates taken into the dome died by the end of the first year of the experiment. And some species, on the contrary, did really great: the cockroaches, for example, were reproducing very fast and played the role of the insects that were supposed to fertilize the plants (because the insects that formerly played this role died). This doesn’t actually happen in nature, by the way. Besides, the parasites that were a constant threat to the crops were also reproducing rapidly.

It is interesting that the climate of the desert biome looked more like the savannah because the evaporating water condensed on the glass dome and returned back as rain.

The strongest of the plants did really well in the isolated space too. But the trees that were in the rainforest and the savannah had a really rough time. In nature, thanks to the winds, the trees become stronger and when there is no wind (and there was none in the dome) they become thin and the trunks just break down under their own weight. Besides, the trees lacked sunlight and their leaves would become yellow.

The biggest problem for the participants (aside from feeling hungry all the time, because they weren’t getting enough calories from plant food) was the lack of oxygen. In 16 months, the level of the gas dropped from 20.9 to 14.5 — this is about the same amount as there is at 13,000 ft above sea level. This had a negative impact on the health of some participants: they got tired faster and had apnea while they were sleeping. And Dr. Roy Walford, who was already around 70 years old, had a decline in his mental acuity. This is why the managers of the project from the outside decided to secretly add more oxygen into the dome.

The reason for the decrease in oxygen levels was only found out after the end of the mission. It turned out that it was because of the organisms that reproduced in the soil. They turned oxygen into carbon dioxide and also disappeared somewhere. The gases reacted with the concrete and produced calcium carbonate which was the reason for the mysterious “leak.”

The concrete constructions in the basement

Biospherians Taber MacCallum and Jane Poynter, who dated before the start of the experiment and got married several months after leaving Biosphere 2, remember that once, they really felt how low the level of oxygen was. It happened in 1992 during the full eclipse that lasted for about 30 minutes.

This natural phenomenon had no impact on any other people outside the dome, but the members of the mission really felt it: because the atmosphere under the dome was 19 billion times smaller than that of the Earth and the plants stopped producing oxygen while there was no sunlight, so the level of CO2 in the isolated area increased quickly and dramatically. 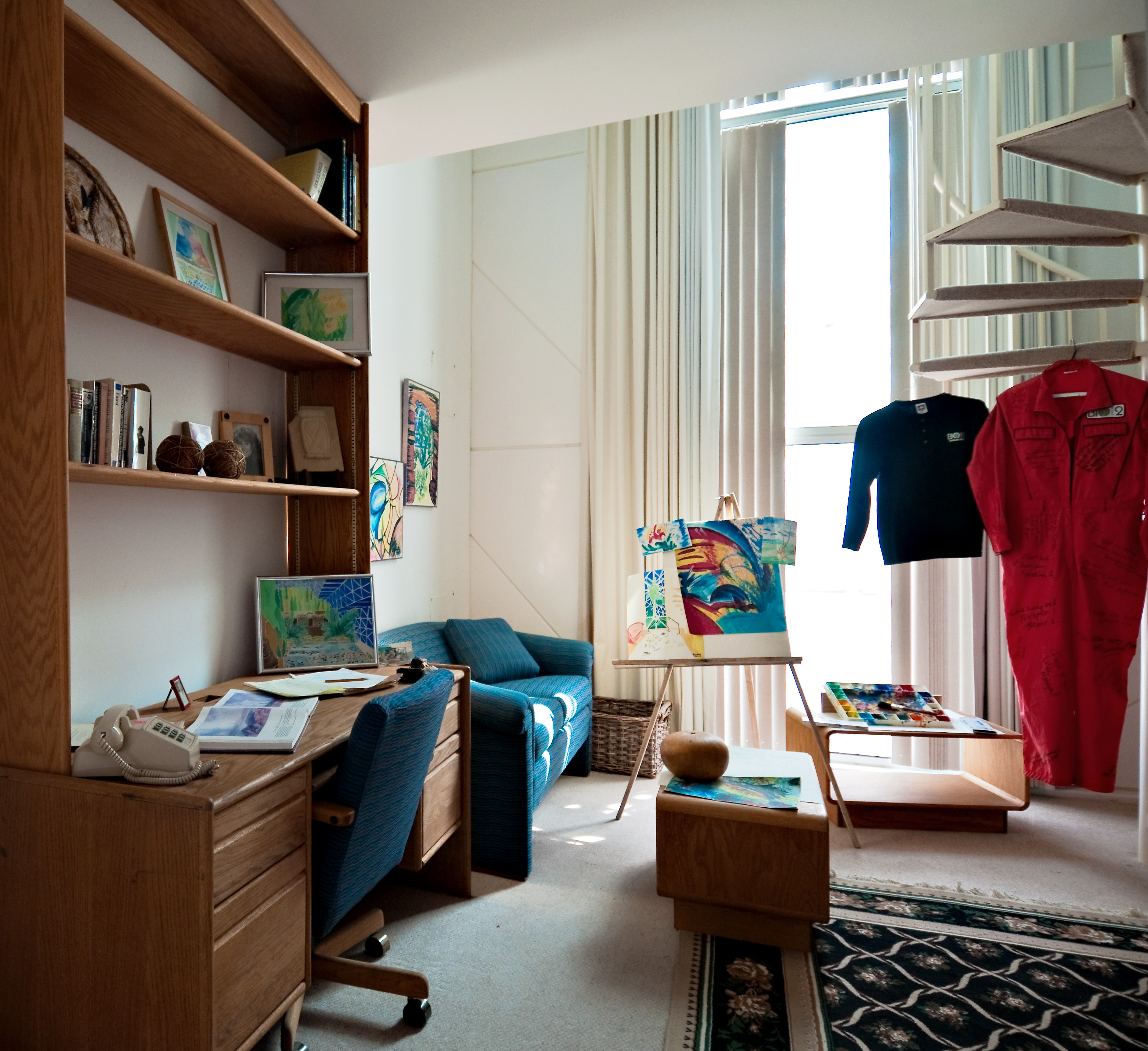 The relationship within the small group was not great either. Jane Poynter said that by the end of the first year, the members had separated into 2 groups: one of them thought that a part of the work should be done by the scientists outside and the others wanted the experiment to be as perfect as possible.

However, all the members of the dome agreed that the harm done to Biosphere 2 could have a negative impact not only on the mission itself, but also on each person. This is why, despite all the conflicts and disagreements, they tried to work effectively together in order to preserve their health and the environment that became their home for 2 years.

Dr. Walford later admitted that he didn’t like some of the members of the “expedition,” but he and his colleagues overcame their negative feelings and did the tasks they set out to do. One of the psychologists that worked with the participants of the experiment after the end said, “If I was lost in the Amazon and was looking for a guide to get out, and to survive with, then [the biospherian crew] would be top choices.”

However, even many years after the experiment, the participants almost don’t communicate and don’t feel good about each other.

Jane Poynter and Taber MacCallum in 2016

On September 26, 1993, the door of the dome opened and the biospherians left their isolation. By this time, society already had a negative opinion about everything that happened under the dome — people thought that the experiment had nothing to do with science and the fact that some oxygen was added didn’t make things any better. The mission was considered to be a failure because of the oxygen problems, the parasites, and the difficult situations among the people.

After the end of the mission, Jane Poynter said, “The first thing that happens is I’m dying to see all my friends and family, and I run over and I give them a big hug. The second thing was we had a party that evening and we had a bunch of people over. I walk out the next morning and there is this gigantic pile of garbage. And we hadn’t had any garbage in the biosphere, we recycled everything. And then you go to a store to buy stuff, and you’re like ’holy cow, look at this.’”

Today, the buildings belong to the University of Arizona that uses them to conduct different experiments related to biology and ecology. Besides, there are a lot of tourists under the dome and, among other things, they see the words that one of the mission members wrote, “Only here, we have finally realized how dependent we are on the environment. If there are no trees, we will have nothing to breathe with, and if the water is contaminated, we will have nothing to drink.”

Would you agree to take part in an experiment like this? And if you had an opportunity to go to Mars, as a colonist, without a chance to go back to Earth, would you take it?