If You Had Acne as a Teen, You Have Better Chances of Becoming Successful, According to a Study

Why Your Dog Follows You to the Bathroom

20 Smart Designs Every City Needs to Have ASAP

Someone Spilled These 20 Floofers, but Please Don’t Call the Janitor

18 Shots That Are So Perfect, You’d Swear They Were Photoshopped

Goosebumps Serve as an Important Function in Our Bodies, and Scientists Have Only Just Learned About It 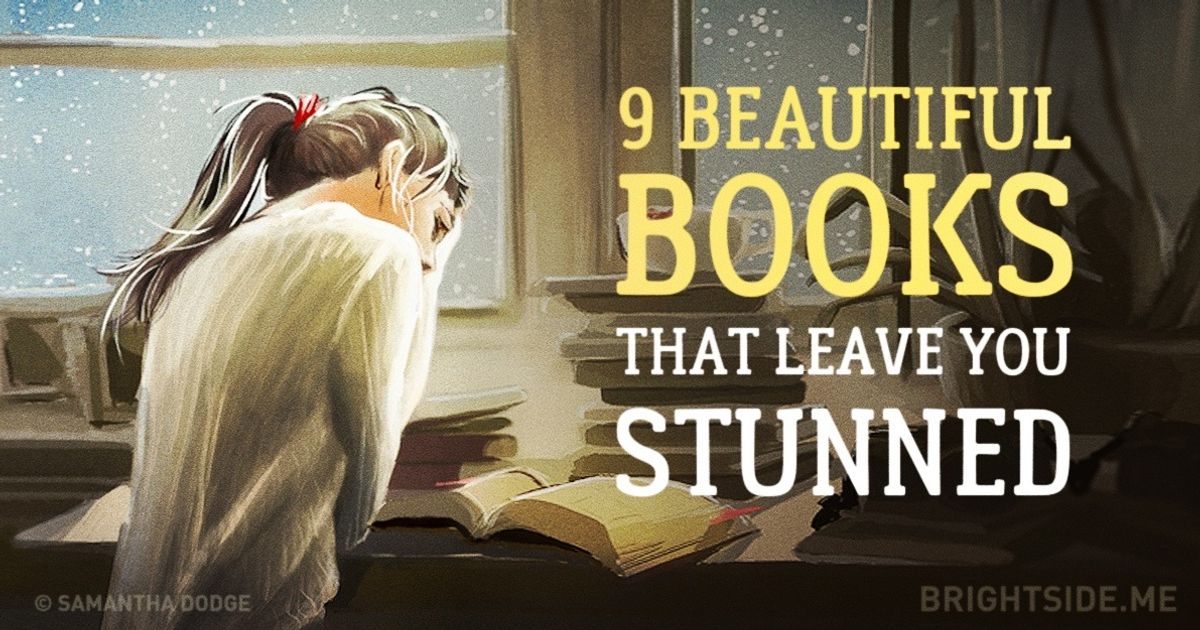 9 beautiful books that will leave you stunned

There are truly beautiful books out there that reflect reality so authentically that they almost seem more real than life itself does. You read them and tears soon begin to blur your vision as you immerse yourself in the lives and tragedy of the soon-beloved characters. These books touch the most delicate strings of your soul, teach you to empathize with people in need, and be compassionate. And when you turn the last page, you realize that you have just experienced something beyond human understanding.

Bright Side compiled a list of nine such books that will really reduce you to tears.

Gayle Forman
Mia grew up in the kind of family each of us would dream to be born into. One fateful morning, after a car accident, Mia’s life changes completely. Now she has to decide whether to stay among the living, or to leave permanently and be with the people she loves most of all but who have all passed away. During her stay at the hospital, Mia reflects on her life, reminiscing about her first date, her family, and her passion for playing the cello. Her folks always helped her to make the right decisions, but now she has to make her own choice.
Buy

Markus Zusak
The novel describes the horrific events that took place in Germany in January, 1939. Never before has the shadow of death seemed so real. Nine-year-old Liesel Meminger doesn’t fully comprehend the situation. Her mother disappears after delivering her and her brother to foster parents. Death first encounters Liesel when her brother dies. This is an amazing story about the real power of books, words and language.
Buy

Alice Sebold
This novel starts with the following sentence: ’I was fourteen when I was murdered’. This is a tragic story written in an incredibly bright tone. The novel tells the story of a family that is devastated by a great loss and about a girl who refuses to accept a horrible death. Despite the ’bright sadness’ and sentimental plot, the book is full of heavy moments, and is packed with emotion and feeling. Get ready!
Buy

Michael Morpurgo
The story is seen from the perspective of a horse named Joey. The horse was sold to the army, and ’serves’ on the Western Front in the midst of the First World War. Soldiers are attached to their horses, and take care of them like their fellow comrades in arms. But throughout the war Joey longs for the day when he will finally go home, to the old farm and his owner. This is a story about the absurdity of war, but first of all it’s about friendship and loyalty.
Buy

Natalie Babbitt
Winnie Foster, a ten-year-old girl, is tired of her family and thinks of running away from home. She runs into the forest having absolutely no idea what is waiting for her there — a magic spring, a mysterious family whose secret she must keep for the rest of her life, and a very difficult choice. The book is about maturity, inevitable losses and how it feels to be immortal.
Buy

Marc Levy
Susan and Philip have been good friends since childhood. They were young and optimistic, and swore to be together forever. However, the death of her parents leasds Susan to change her worldview — she sets herself the goal of helping people in need. She abandons everything, preferring a quiet life over the chaos, wars and disasters.
Buy

A Wrinkle in Time

Madeleine L’Engle
’It was a dark and stormy night.’ The Murrys are disturbed by the arrival of strange guests who draw Meg, her brother Charles and their friend Calvin into an interesting adventure. In order to save his brother, Meg must prove to the alien and hostile Force that she really loves him. But it’s so difficult to express the notion of love.
Buy

The Spark of Life

Erich Maria Remarque
In this life, we actually have nothing to lose. It’s a love and pleasure that are doomed and on the verge of destruction. There is no future, death is not an abstract notion but a bitter reality. Nevertheless, life goes on. Life is beautiful.
Buy

Margery Williams
A novel about a velveteen toy rabbit given as a Christmas present to a small boy. The bunny is not a big hit among the other modern toys. The wisest and oldest toys tell the little rabbit that the latter can become real only when he is loved. And it’s at this point that you’ll witness the real power of magical thinking.
Buy
Preview photo credit Samantha Dodge
8-83-
195k