© 2014–2021 TheSoul Publishing.
All rights reserved. All materials on this site are copyrighted and may not be used unless authorized by the Bright Side.
7293

15 Clever Riddles That Will Tease Your Brain to the Max

15 Goofs Who Know How to Have a Good Time

8 Things That Prove the Future Is Here

Why Choosing to Ignore Things in Life Can Make You Happier 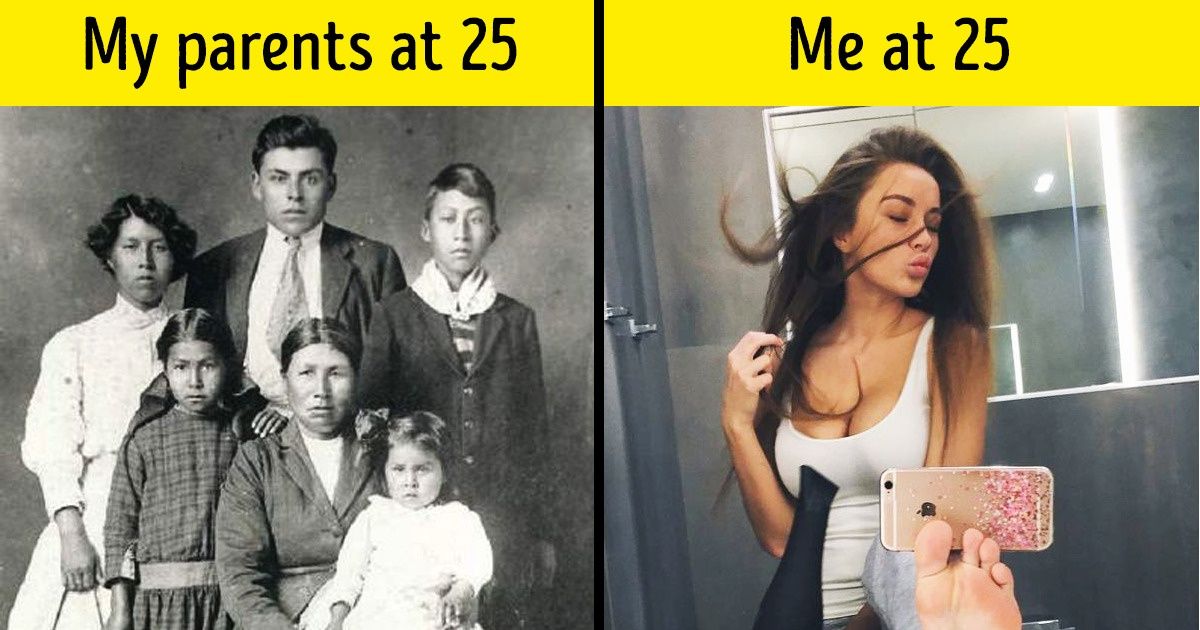 Think about the generation of the so-called baby-boomers (the people who were born before 1979) when they were 25-30 years old. They were adult, self-fulfilled people who had 3 jobs, raised children, and in the evenings they'd discussed political problems and classical music. But what about the young people of today? These millennials (the generation born from 1979 to 1995), despite their intelligence and financial independence and stability, look for their inner self until the age of 30-35, live in rented apartments, and think, "I guess this is what an adult would do!" And of course, they don't think that they are adults. So why are modern young people so childish even in their 40s?

Here at Bright Side, we have decided to find out what the reasons for this phenomenon are.

Attention: If you are a happy 21-year-old father of 3 children, you have your own thriving business and 3 college degrees, please don't jump to conclusions! Remember, these are merely statistics.

1. A new stage of human development

Let's look back at history: Up until the beginning of the 20th century, there was no such thing as a teenager. Before around 17 years old, a person was considered to be a child, and on the day they turned 17, they received a big gift — family responsibilities and a goal to become financially independent as soon as possible.

And only in 1904, thanks to the outstanding scientific work by psychologist G. Stanley Hall called "adolescence", the world community started thinking about the period we now call "teenagehood". Hall was the first person to describe this age as a time of storm and onslaught. There are a lot of really illustrative charts in his work that show the connection between levels of sadness and a person's age. Only after this work, teenagers were seen differently. People stopped thinking about them as lazy and rebellious kids. People have begun to see people who were struggling on their way to adulthood.

Theoretically, the period from 20 to 30 years old or even 35 (let's call it young adult) can also have its own problems if we study the emotional side of this time. So, if in the 20th century everyone agreed that teenagers are not adults, maybe in the 21st century, people will say that a young adult is not an adult either!

For example, this year scientists already said that teenagehood should be extended until the age of 24. But there are still 20 years left to research.

In the beginning of the 20th century, the average human life expectancy was about 40-50 years old. Of course, if you expect to live only 45 years, it's strange to spend 35 years of your life "looking for yourself". In this case, you don't have much time to think. You have to be fast, this is the key to success.

Today, in many developed countries the average life expectancy is over 80 years. So why not let 20 to 30-year-old people experiment with different fields of their lives before they find something to settle on over the next 50 years?

And of course, we understand that you might say that not every person will live until the age of 80. That's why we want to say that life is an amazing thing. At any moment, anything can happen and nobody can foresee this. So living with the mentality of, "What if I don't live until I'm 80? I need to get married now!" is not an option.

3. The world is changing too

There are a few different aspects here:

We can admit that the modern, young people of today are way less adventurous. This is probably because there are no strong prohibitions and because people see a lot of different things in the media. Anyway, here are the consequences:

5. A sense of possibility

Jeffrey Jensen Arnett, a psychology professor at Clark University in Worcester, Massachusetts talks about "a sense of possibility" that describes the young people of the 21st century. This entails a sense of insecurity about your future but also a feeling of optimism about your possibilities.

So, a standard job from 9 to 6, cute but constant arguments with your spouse, some kids, family dinners on weekends and visiting the sea once a year are not on the list of things a typical 20 to 30-year-old person wants to have. They'd rather say, "I am unique, I am the second Elon Musk." But all these Elon Musks are really scared of their future and don't have any clear plans. This is the difference between them and their parents who knew exactly what they wanted from their lives and got it.

What has all this led to?

All the reasons we mentioned above and the changes that happened led to these alternative models of adulthood (of course, this is if we rule out the many people who inherited and continued the lives their parents had):

Kidults are 20 to 30-year-old people. They are young but already self-fulfilled with quite childish hobbies like exploring fantasy, Dota, and The Simpsons. They can make a genius presentation for a nuclear energy conference using memes. They can go to clubs after hard shifts in hospitals. Well, these are smart guys who have teenage hobbies.

Downshifters are the people who keep looking for themselves but fail to find. They can have a new job every month in different fields (from fishing to art), join cults, move to small rural towns, and look for energy on Goa.

NEET (Not in Employment, Education or Training) are the people who don't work and don't study. They have their reasons: they are anti-social, insecure, passive, disappointed in life, and they can't use their potential to the fullest. These people wait for a sign, and they probably have some abilities that you can read about on this list:

Should we do something about it?

Clinical psychologist Meg Jay explained in her lecture on TED about young adults who come to see her. They complain about wasting decades of their lives not knowing what to do.

She talks about 3 things that every person older than 20 but younger than 40 should know about to avoid having a huge disappointment when they get older:

1. Forget about your personal crisis and work on yourself, learn new things and become more valuable. Of course, you should be looking for yourself, but don't let this search turn into simple procrastination.

2. Don't limit your communication. New people or a guy who knows a guy may be very useful in life. For example, you can't find many jobs in newspapers or websites, sometimes you need to know people. This is not cheating. This is how information is spread.

3. At the age of 30, when you notice that all your Facebook friends are getting married, don't rush and marry someone just because it seems that you have to. You should build a relationship before you marry someone. This means that you should look for love just like you look for a job.

So, the modern day 20-year-olds are the same 20-year-olds as 50 years ago, but the world has changed. And as you know, people adapt really well, this is why we have such an unusual generation now. Don't judge yourself, your children, your relatives. Just show them the lecture we mentioned above and you will feel better.

What do you think this tendency will lead to? Share your opinions in the comment section below!