What Our Favorite Hollywood Celebrities Looked Like Before They Got Famous

If None of These Floofies Can Make You Smile Today, Nothing Can 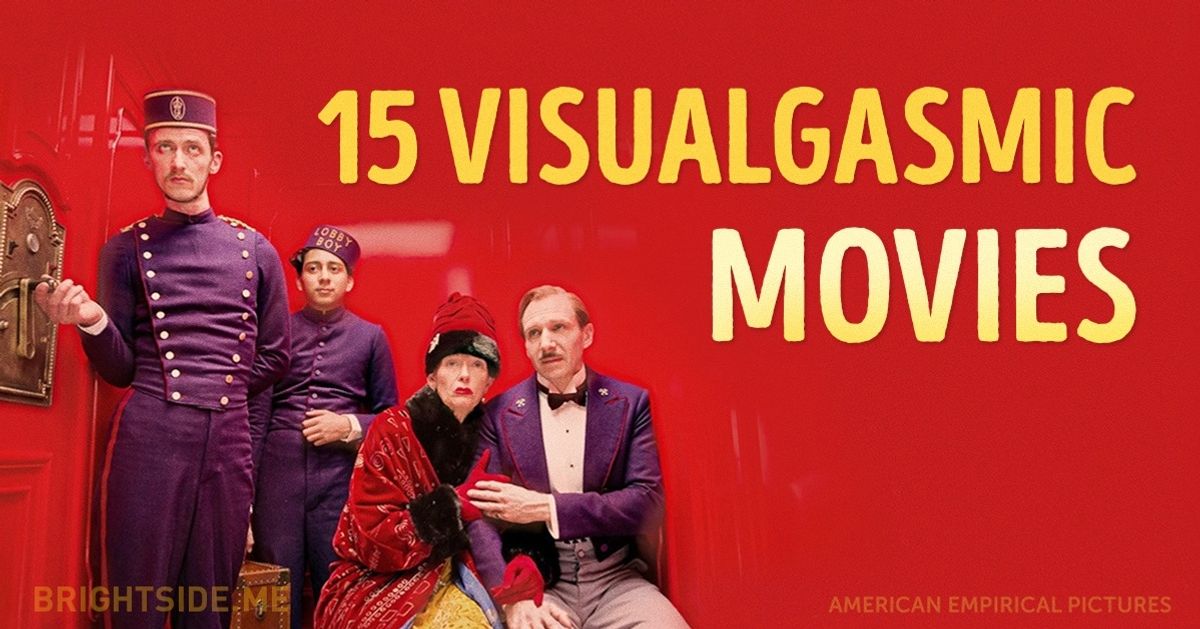 There are movies where a perfect visual form is a crucial factor in understanding the whole picture. In these movies every single detail is thoroughly thought out. They impress with their magnificent scenes, and their unique atmosphere remains in the memory for a long time.

Bright Side collected exactly these movies - different in genres, but equally impressive in their style.

Before 'Amelie' brought fame to its director Jean-Pierre Jeunet, he made a name for himself thanks to the eccentric comedy 'Delicatessen.' The movie reminds us of comics a little bit: it's made in yellowish colors, featuring an original sepia tint. As a result, it brings a feeling that the events of the movie are developing outside of time: not in the past, not in the future. If you like 'Amelie,' you surely need to watch this one!

The Science of Sleep

'The Science of Sleep' is a wonderland made of adorable improvised materials. Plastic water, cloth toys, the snowy peaks covered with white sheets, the clouds made of cotton - all of it is the main characters' dreams. The movie is original, unusual, and has its own unique world. The incredible worlds become mixed up with reality, and sometimes it's even unclear where ends the dream and begins the reality.

The movie 'Her' has become one of the most vivid and unusual works of contemporary cinema. Along with the original story, it's worth mentioning the movie's special atmosphere - the first thing that draws the viewer's attention. Carefully chosen tones, clothing, a city with skyscrapers and stunning panoramic views - you already feel like you've gone into the near future; so near that you fully believe that in a few years everything will look exactly as it is on the screen.

Even on the back of high-quality director's and screenwriter's work, you won't miss in this movie the amazing images and the cameraman's 'tricks': cool gray colors going through the whole story, static long shots and close-ups, camera angles creating an unusual atmosphere. This all makes the main character's travels with a cat look like a real dream.

Philosophical topics, talks about God, meditative scenes, and an almost complete lack of action development - all of it is revived by the movie's image. It's a movie where the camerawork turned out to be well above both the directing and acting. This picture requires no comments, just watch and decide whether you like it or not.

'Speed Racer' is a movie full of toxic and acid colors, and it looks really good. You won't meet many movies with such a riot of color! The vividness is absolutized here. The first 20 minutes of the movie seem extremely unusual, and it's even difficult sometimes to follow what's happening on the screen. But then your eyes adapt to it, and such a vivid picture remains in your memory for a long time.

Gaspar Noé, the movie director, with the help of a skilled cameraman, managed to achieve the amazing quality of the image. The specifities of the narration surprise the viewers by showing scenes of amazing integrity and pure theatricality when we follow the continuous action for quite a long period of time. And thanks to the stunning mixture of colors and images of the neon of Tokyo, the movie makes you fully plunge into its atmosphere, and you go through the whole picture together with the main character.

This movie discreetly plunges you into its world, beckoning and charming you. And in this state you don't confuse the movie and the reality anymore. The action passes so slowly and softly that you have enough time to think about everything along with the movie characters.

The image of this movie is worth relishing for hours. It's really awesome! The first thing that catches the viewer's eye is the beauty of the filming and the skillful editing. Stunning landscapes, dynamic parties, and rapid pursuits recreate on the screen the America of the 1920s - the world of prosperity, chic, and jazz. Don't you want to go there right now?

Before the filming started, the director Mikhail Kalatozov received the ideological carte blanche, and a huge financial support that allowed him to use new cinematographic techniques and equipment, such as a waterproof camera with a periscope, high-quality wide-angle lenses, and unusual angles. That's why the movie is considered to be one of the best examples of camerawork.

'The Grand Budapest Hotel' can be called without exaggeration one of the most beautiful works of art. You cannot even listen to it, just watch. Sit back in your armchair and watch this magnificent movie - it's like a photo album, with the characters moving within the photographs. It's so incredible that every single shot there is a real masterpiece.

This movie is an unimaginable luxury for cinema lovers! The pure surrealism, drama, and the most beautiful fairy tale are so skillfully combined there that it's hard to believe. The viewer is watching a fairy tale told by a little girl - a fairy tale so vividly described that it seems real. It's better to watch the movie at home late at night, at full volume, and with the lights off.

Thanks to Pushkin, the imagined conflict of Mozart and Salieri became a legend known by everyone. You can see this beautiful story in 'Amadeus.' The colors, costumes, music, and the scenery of the eighteenth century - all of it wins our hearts from the first scene and makes us feel like the main characters' contemporaries.

The film lasts for 3 hours, but for such a picture it seems to not be enough. Such a beauty is worth watching for as long as possible. The clear image is remembered not only by stunning landscapes and futuristic cities, but also by the strong contrast of short films, which form the whole movie. This picture will remain in your mind for a long time.

This movie captivates with its atmosphere. It's a bit dark, but it is incredibly harmonious. You can see the surface of Mars, a war in Vietnam, a meeting of old friends over a beer, a fight with a crowd of criminals - and all these scenes will be perfectly combined with each other. It's safe to say that this movie is really visualgasmic. It will certainly please even the most experienced viewer.

Eastern people are one with nature. You can see the signs of it everywhere: in their words, their actions, their eyes. That's what the filmmakers wanted to show - the authentic Asian natural aesthetics. The movie is absolutely special thanks to its silent beauty, contemplation, and meditativeness. It's recommended to all the nature lovers.