15 Celebs Wore the Same Outfit, and We Can’t Decide Who Stunned Us More

Playing Video Games Can Actually Improve Our Mental Health, According to a Study 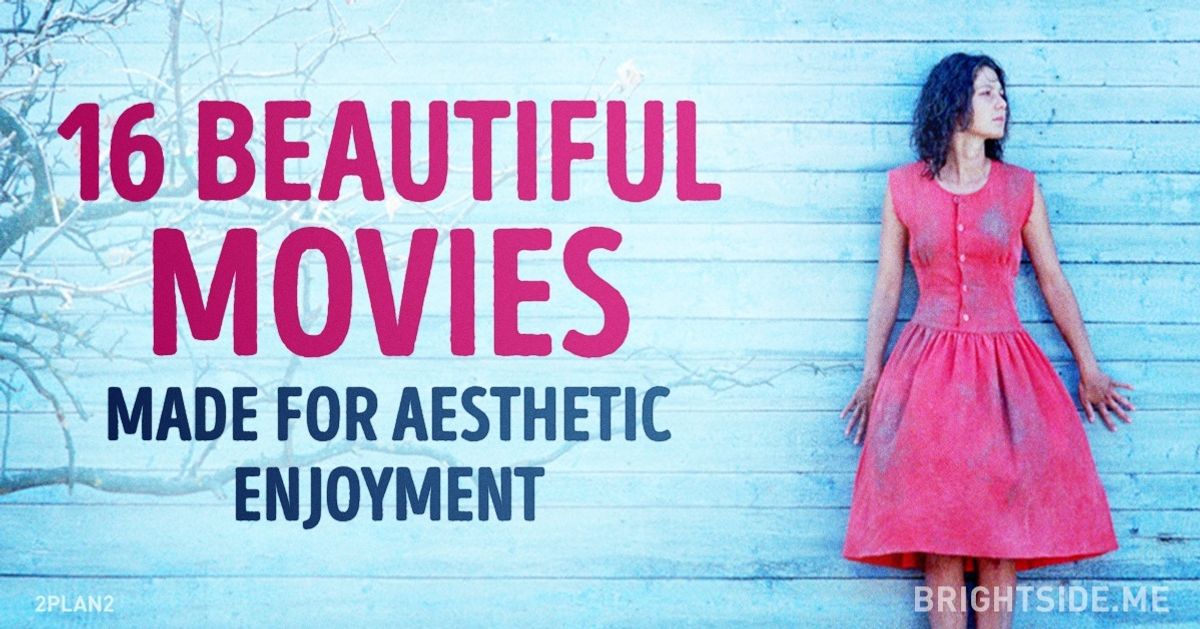 There are movies so perfect that they seemingly couldn't have been made by human beings. They bring us joy with their pure existence, take us away from our mundane troubles, inspire us, and give food to our starving imagination.

We at Bright Side bring you a selection of unbelievably beautiful movies that no true connoisseur of the cinema should miss.

This movie is so gorgeous that watching it, you forget to understand its plot. The misadventures of two sophisticated vampires having blood for dinner and looking affectionately at each other are of no importance here, because it's all about the ambience. This movie flows like a grand river, and neither its characters, nor the viewers have the choice of swimming along or not.

In the Mood for Love
Faa yeung nin wa

A movie of fantastic beauty, telling the story of two lonely people living in a communal apartment in Hong Kong and gradually becoming closer to each other. Their spouses are never at home, while the surroundings are overflown with a kind of special spirit that is literally impossible to resist. The light and fluid music, the magic of color, the simplicity and expression of hieroglyphs, hypnotic repetition of liquid motions... all this enchants the viewers and drowns them in the depths of a feeling that is destined to fail.

One of the most captivating movies by Federico Fellini, this is structured to resemble dreams and visions, a delicate web of lyrical, funny, and slightly obscene images born of the memories and imagination of the great director. A small Italian town, a small boy named Titta, small people and small things tie together to form a colorful and charming picture made by the hand of a true genius.

A young and beautiful American girl comes to Italy in search of her father, uncovering the mystery of her mother's death and finding her first love along the way. This is a brilliant example of a movie for connoisseurs, with the masterful work of Bernardo Bertolucci as the director, the incredible Liv Tyler as the main character, the picturesque scenery of Tuscany, and the pure and powerful emotions making it one of the most lovely and touching pictures in the history of Italian cinema.

This is a deep and meditative picture telling us about time, fate, human life, and the great unknown of the beautiful and mysterious world around us. The action takes place in the dwelling of an old monk, far from civilization. The monk's apprentice is a little boy, whose life will be one full of hardships and trials. However, neither the teacher nor the apprentice are able to stay fate's hard foot, as no one is capable of staying time itself.

Everyone has, without a doubt, watched this movie. But one can't omit it when talking about the most beautiful pictures of all time. Jean-Pierre Jeunet managed to create such a vivid, splendid, and charming love story that you can't imagine anything more aesthetically perfect. Amelie is an ideal combination of colors, rhythm, music, and inspiration with an enormous number of charismatic characters to boot. Amelie is beauty itself, in other words.

Thomas, a young aspiring photographer, comes by an interesting couple in a park and takes a few shots of them. The woman notices him and demands that Thomas give the film to her, but the intrigued photographer tricks her and keeps the shots. When the pictures are developed and blown-up, Thomas finds out that he became an unwilling witness of a criminal drama... The plot is enwrapped in the classy life of London, which Michelangelo Antonioni shows with a unique taste and elegance.

This one is a legendary movie made by Jim Jarmusch that comprises the elements of a philosophical parable, a road movie, a western, and a mystical ballad. William Blake (Johnny Depp), a young accountant, travels the Wild West with a weird Indian named Nobody. They leave behind a dirty industrial city and forge ahead to an ancient spiritual site of the North Americans. The journey turns out to be both a physical and a mental one, with its melancholy scenery, serene dialogues, and monochrome brevity making the viewer travel together with the characters of this wonderful movie that is like no other.

This movie by Stanley Kubrick tells us about mysterious black objects that come into contact with people from time to time and somehow influences human evolution. Scientists have learned that these objects send their signals to Jupiter, and it's decided to send an expedition there. No one could have suspected, however, what wonders the astronauts would find... A Space Odyssey is the most well-known and well-respected sci-fi movie of all time. It was made in great style, and its image has long since become classic in design and fashion.

An incredibly powerful movie based on Shakespeare's Macbeth. Expressive images, emotional tension, and the mystical depth of the action all are a traditional hallmark of Akira Kurosawa's. The plot revolves around a samurai prophesied by a witch to defeat his shogun. Encouraged by his ambitious wife, Taketoki Washizu finally resolves to treason and murder to fulfill his destiny. However, pangs of conscience spoil all the joy, while his fate turns out not to be complete yet...

A gothic movie-novel from the genius Tim Burton, master of fantasy and horror, who loves to shoot grotesque and funny pictures with fairy-tale motives and very unusual characters. This movie is stylistically perfect, charming, and captivating from the very first moments. The story is about a New York constable who investigates a series of mysterious murders which are rumored to have been committed by the Headless Horseman...

A picturesque history action movie taking place during the French Revolution. A terrible beast appears in the province of Gevaudan, and butchers unfortunate travelers. Many want to uncover the mystery of the Beast and kill it, but only few are strong enough to carry out such a feat.

Red for lies, blue for confusion, white for truth. Three colors, three philosophical parables - three cinematic masterpieces in one movie by Zhang Yimou. A nameless hero arrives at the gates of the Emperor's castle and tells him of his three victories over the throne's enemies. The whole movie is a picture based on an ancient Chinese legend - one that is beautiful and wise.

A story of a charming yet not entirely mentally healthy Babydoll is a thriller, an action movie, and a fantasy all in one. Her mother has died, and her stepfather wants to lobotomize her. The psychiatric asylum where Babydoll finds herself now seems to her like a brothel, another second - and it's a feudal Japan, and the next moment she's in the trenches of WWI. Almost all elements of 'mash-up' are present here - zombie soldiers, samurai, orcs, knights, thermonuclear bombs, and magic items, but the movie is valued not for this, but for its dark splendidness and the impeccable taste in each moment.

A sinister movie filled with religious and psychological symbols - a hellish creation of the lurid genius Lars von Trier. The dark beauty of the picture drowns the viewers in the difficult relationship of a married couple who have just lost their child.

A wonderfully sensible Hollywood blockbuster shot by the legendary James Cameron. The action takes place on the distant planet Pandora inhabited by beautiful blue creatures, the Na'Vi. They live in perfect harmony with nature, but once humans arrive at their homeland, they find themselves on the verge of complete annihilation. Fortunately, visitors from Earth can infiltrate the inside of the indigenes' world with the help of avatars, a kind of biological suit operated by the human mind. In the end, everything and everyone is saved by love and, of course, otherworldly beauty.