© 2014–2022 TheSoul Publishing.
All rights reserved. All materials on this site are copyrighted and may not be used unless authorized by the Bright Side.
1318-

17 Photos With More Drama Than Any Diva

15+ People Who Can Find Beauty Anywhere

20 Pics That Can Bring Some Sunlight to Your Day 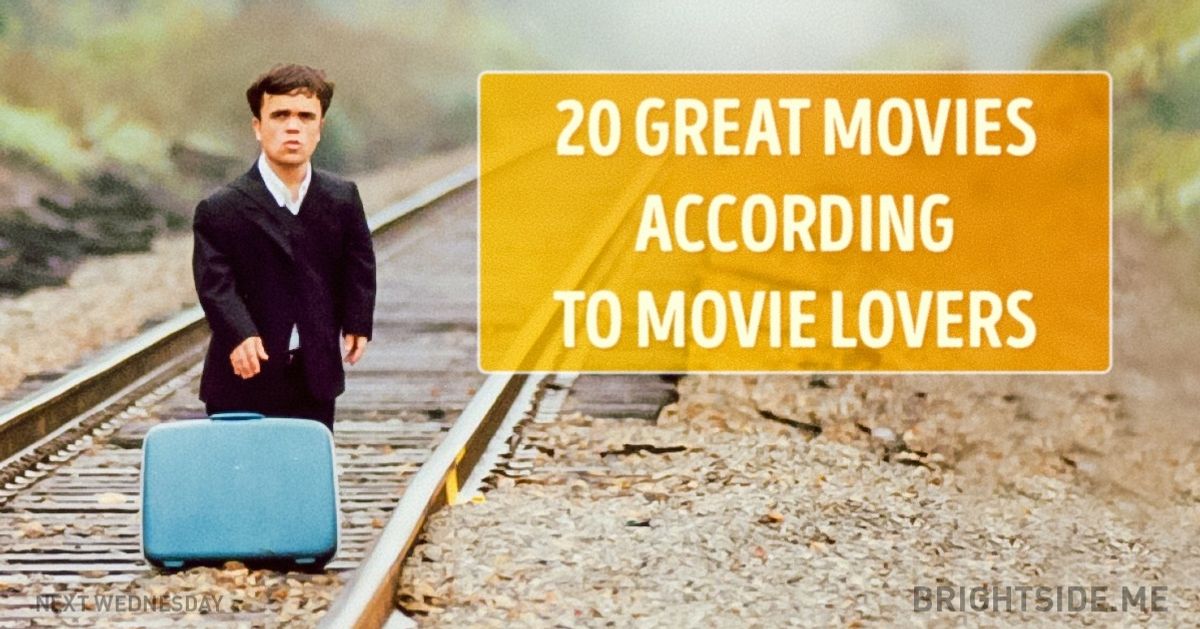 20 great movies according to movie lovers

These movies aren't as widely known as the major blockbusters, but millions of cinema-lovers around the world have nevertheless flocked to watch them - and enjoyed what they saw immensely.

Bright Side collected 20 movies beloved of ordinary cinema-goers that we think are interesting, important, or just downright entertaining.

An absorbing movie about a teacher of English literature who substitutes for permanent teachers in poor urban areas. The life of the school that we see is stark and often upsetting, and the main character goes through pretty hard times, but he nevertheless tries to overcome difficulties and inspires his pupils, becoming the favorite school teacher.

This movie charts the life of a famous New Zealand man called Burt Munro, who spent decades turning his favorite 1920 motorcycle with a maximum speed of 58 m/h into a racing machine capable of setting a world speed record. This is a story that reveals how important it is to never betray your dream, and to ignore mockery and doubt to achieve what you've always wanted to do.

The movie tells the story of the life of the Bootlegger brothers, who struggle against everyone and everything all at once: their competitors, the police, and with their own passions. The movie's full of gangster stars, and the action develops vigorously and dynamically.

The main character of this movie is abducted at his daughter's birthday. He spends 20 years in a solitary cell, without knowing who abducted him and why. One day, without any explanation, he's given his freedom, and can finally go his way. This Korean movie boasts  brilliant acting, great music, and wonderful cinematography.

An amazing black and white movie about an old man who receives a letter claiming he had won a huge amount of money, and believed it. He goes to Nebraska to collect his $1 million. 'Nebraska' is a movie as beautiful as the most wonderful poem. Everything's perfect here, despite the fact that it's not quite clear whether it's a drama or a comedy.

A homeless looking drifter, hiding away from the world, has only one dream - revenge. Director Jeremy Saulnier turns a banal plot into a serious drama with a profound message.

George, an English literature professor, gives himself only one day to answer the question of whether he has a future. After the death of his lover, he'll have to find a reason for living again. This is an utterly amazing movie with a great story and brilliant acting.

This is a beautiful 90-minute journey through the most amazing places on Earth. The director, Ron Fricke, reveals the existence of a close link between all people and events on the planet, the circle of births and deaths, and the diversity of the world, where beauty coexists with squalor. He shows us that the end really means the beginning, and that there is nothing to fear.

Doug is a simple bouncer working in a small-town bar. One day he's offered the chance to become a hockey player, though he isn't even able to skate. However, if you wish for something, it'll come true. A cheerful and nice story about how an ordinary guy's life is turned around.

A 15-year-old girl from a Mormon family living in Utah one day finds a prohibited tape of rock music. Having heard the music, she experiences emotions which she never felt before. Three months later she discovers that she's pregnant, and decides that the musician who performed this song is her baby's father. She decides to find him whatever it takes, and leaves on a journey. This crazy story underpins a stunning movie that can help anyone to fall in love with life and believe in oneself.

This is quite simply wonderful movie, where every shot is beautiful and reminds you of a melody. Nemo - the only mortal man in a world of immortal people - tells the story of his life. He flounders, but offers up ideas, one after another, which make you stop and think over and over again.

A boy from a Texas family who went missing three years ago is found in Spain. The family is overjoyed, despite the fact that the boy doesn't look exactly like their missing relative: he has different colored eyes and a different hair color, speaks with an accent, and doesn't recognise anyone. This documentary film tries to tell us about a 'chameleon' - about a man who managed to pull the wool over his victims' eyes more than 30 times.

A movie about some teenagers from Pittsburgh who worked at an amusement park in 1987. This is a sweet, gentle, funny and intimate masterpiece about unrequited love.

A group of brave men risk their lives to save the world's last mountain gorillas in the midst of a new civil war in the Congo. This documentary feels like a great feature film - a powerful and eventful one.

A romantic comedy that examines the complex relationship between father and son. This movie is beautifully filmed, and it's not only funny, but also dramatic. It demonstrates perhaps better than any other the importance of family bonds.

This Danish-made thriller is an unforgettable experience. The movie tells the story of a poor rural teacher, who was slandered by the people of his village. The minimalist interiors, cool colors, fallen autumn leaves all create the impression that the film's creators have skillfully captured the true atmosphere of the Scandinavian countryside. A wonderful example of modern European drama.

Fin is a superb guy: inquisitive, smart, well-educated, and infinitely kind. Because he was a dwarf, however, he's shy around other people, and has no need for their pity or inquisitiveness. That's why he decides to move to the middle of nowhere. But that's where he unexpectedly finds new friends.

A 14-year-old boy called Ellis lives with his parents in a houseboat on the Mississippi riverside, and uses his spare time to explore the river together with his friend Neckbone. One day they meet a man named Mud. He hides in the woods, and he's obviously waiting for someone. This is a beautiful tale about love, loss, and painful personal growth.

This is more than a good example of a black comedy. The movie consists of six short stories about people who find themselves in critical situations. Because every scene is of very short duration, the action develops rapidly, and is accompanied by perfectly matched images.

A fascinating, positive, bright, light and warm movie. This Indian movie is definitely a great work of art. The story centers on two friends who are looking for their missing college friend. Their search is accompanied by the story of how they became friends, what they went through, and how they studied together.