© 2014–2022 TheSoul Publishing.
All rights reserved. All materials on this site are copyrighted and may not be used unless authorized by the Bright Side.
6-13-

20 Amazon Products That Can Spice Up Your Summer Adventures

16 Precious Tattoos With Backstories That Make Them Truly Unique

There’s a Whole Universe Hidden Inside Your Body, and Here Are 20+ Photos to Prove It

9 Best Things to Do in Egypt (16 Inspirational Travel Photos)

19 Amazon Deals to Help You Achieve Luscious and Healthy Hair

10 Animals Who Are Actually Dangerous Despite Their Innocent Looks 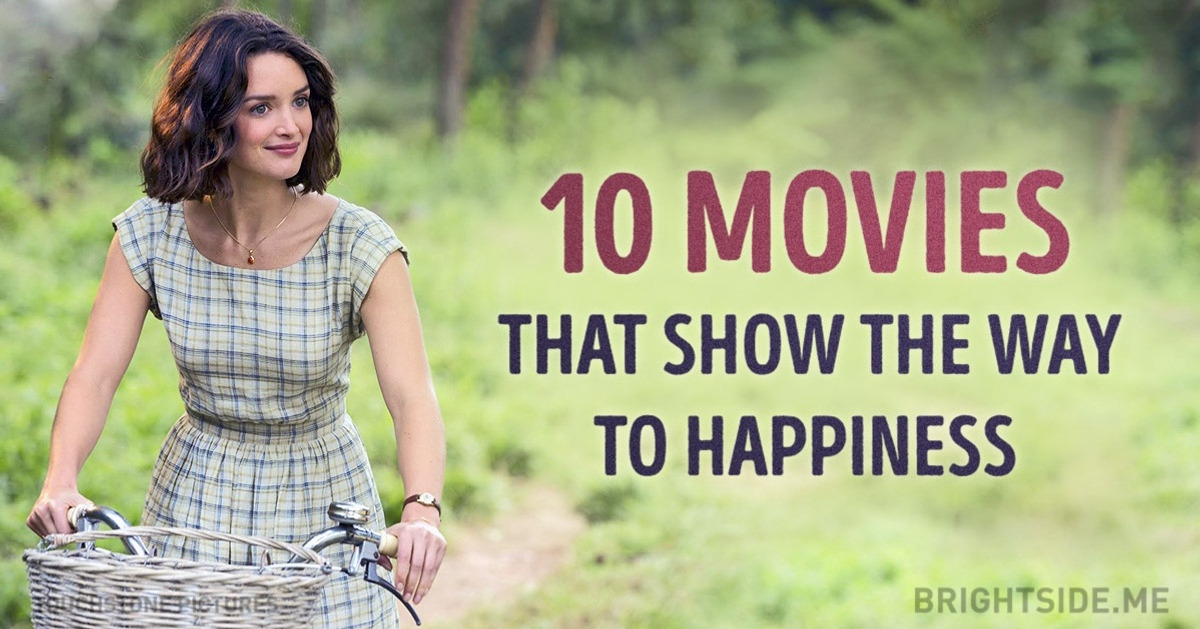 Ten essential movies that will show you the way to happiness

Happiness can come in different forms. Millions of people live on Earth, and we'll never hear the one and only true answer to the question: what does happiness really mean? Someone may feel truly happy when they're socializing at a fun party, while others may have learned long ago to find joy in harsh everyday life. Of course, all of us have a lot in common. Most people would include love, friendship, the birth of children, personal achievements in their list of things that make them happy...But life remains a multifaceted thing.

We at Bright Side offer you a list of ten movie 'guides' where the characters managed to find their treasured path to happiness.

This 'travel' movie will tell you a lot. Life had quite an ordeal in store for one Californian man named Tom Avery: his son died in the French Pyrenees. The boy passed away at the beginning of a pilgrimage on the famous Way of St. James. How was his father to move on? The heart slows down...But the main character is a strong man. He finds a new goal: to make his son's dream come true, to walk this road instead of him. Those who like serious and deep plots will love this movie.

Agatha Christie said: 'Life during the journey is like a dream in its purest form.'  What remains for a physics teacher who fell in love with a Turkish danсer? Daniel didn't listen to reason, he just followed his heart. Well, he actually drove...to Istanbul. On his way Daniel gets into a number of different and curious incidents, but he believes that a ring with an ancient Aztec symbol will show him the way. Fans of spontaneous travelling will surely enjoy this movie.

Life as a House

Sometimes there are circumstances in life that allow you to change your own fate completely. But sometimes you don't have time to wait for heaven's help. A 45-year-old architect, George, finds out that his days are numbered. But he had so many dreams, and he thought he would have enough time...Is it possible to correct all the mistakes of the past in a short period of time? Who knows. But he has an idea...If you've already given up on all of your sincere family relationships, this profound movie will convince you to go in the opposite direction. The main character is played by the outstanding Kevin Kline.

Is it even possible that Woody Allen can create a movie that doesn't touch our hearts in some way? The answer is surely 'no'. A true master of cinema always manages to create a world where the emotions run the show. A romantic screenwriter who secretly wished he had lived in the 1920s arrives in Paris with his fiancee. It seems that their vacation in a place like this can only go perfectly. Suddenly, Gil's dreams start coming true...Oh, Paris, how many more secrets do you have?

Heaven always sends us a chance. But sometimes the signs of destiny are rather impressive. Jack works as a Radio presenter, and one of his caustic remarks turns into a tragedy. He quits his job and tries to drown his sorrows in alcohol. Some time later, he meets a homeless man, Parry (Robin Williams), who was once a professor of history. He shows Jack a different Manhattan, where the castles are situated right on the streets, and the medieval knights always have somewhere to go...This amazing movie has a right to be called 'a box containing a secret.' And there are just as many miracles inside as you're ready to have.

Passionate Indian spices vs. French refined sauces? Why not! Some Indian immigrants open a restaurant in Provence. Their idea is a good one, but there's a small problem: there's a French restaurant, with a Michelin star, right in front of the new establishment...There's a lot of things to say about this beautiful and hearty movie, but we'll make it short: it's delicious. In all the senses!

Life Is a Miracle

Emir Kusturica is true to himself. His talented touch turns a simple plot into a true guide on how to find happiness among the trials and troubles of life. This is a comedy-drama about a dreamer, Luka, who wants to build a railway tunnel in the Balkans. Life has a lot of challenges in store for him: war, betrayal, disappointment...But everything that happens seems to strengthen his sincere desire for joy.

The Boat That Rocked

This is a real story about the DJs of a British pirate radio station which broadcasted from a ship in the sea during the uncontrolled, carefree and reckless 60s. Could you imagine how well-known it would be if the BBC broadcasted pop music only two hours a week? Are you ready to plunge into the atmosphere of the rock and roll years? Then go, the sea breeze and some charismatic characters in this movie are waiting for you! You'll hear a lot of great songs of the era and be convinced that the Beatles weren't the only ones who played good music.

Los Angeles the 1990s. Life is in full swing, and here comes the plague of locusts...In this ironic and sometimes surreal movie you'll have an opportunity to see the life story of more than 20 characters play out. By the way, one of them is played by the charming Andie MacDowell. This philosophical movie reminds us that in the hustle and bustle of everyday life, people start to forget eternal values. Happiness is so close sometimes...But, as it's often said, it's a matter of taste.

This inspired movie tells us that not only superheroes can rise above everyday life. The plot is based on real events, and that's why it's even more interesting to observe how a clumsy, bespectacled man named Eddie becomes the 'Eagle.' But if you thought that he became a legendary champion, you're wrong. First of all, this is a movie about an ordinary guy, just one of us. And Eddie's unusual path to happiness is a...ski jump. If you can't get enough bright emotions, good humor, or Hugh Jackman, then you should watch this movie.