We are usually surrounded by negative news that overwhelms us from TV, radio, the internet, and news outlets. However, it's feel-good-news that has been proven to boost our mood and make us feel more content, happy, and motivated. So here are some heartwarming stories with happy endings that will fill your heart with hope and your eyes with tears.

We, at Bright Side, want to share these 11 pieces of news with you, and hope that these stories will bring you joy for a change and restore your faith in humanity.

1. A guy gave up his first class seat to his new friend onboard.

Jack purchased seats in the first class cabin for his family and himself. However, when he got onboard, he found Violet, an 88-year-old lady whose seat was directly next to the economy toilets, and he swapped seats with her. This story was shared by Leah Amy, a flight attendant who was working on that plane.

Patrick Kilonzo Mwalua drives several hours, 4 days a week, to provide water to thirsty Kenyan wild animals on his own dime. The man says that animals suffer from drought so severely that they would surely have died already if it had not been for his water truck.

A former drug addict who recovered from his addiction decided to return money to a stranger whose pocket he picked 5 years ago. He attached an apology letter and promised to live an honest life.

4. A woman offers free pools for dogs to help them survive the heat.

In a small town in Virginia, a woman did not remain indifferent to dogs during a summer heat wave: she offered free doggie pools for anyone to take.

5. A teenager held a classroom door shut during a school shooting to protect other students.

15-year-old Anthony Borges used his body as a shield to keep a classroom door shut and protect 20 other students during a Florida school shooting. Luckily, he stayed alive. His family organized fundraising to ensure he had a speedy recovery.

6. Locals covered stray dogs with blankets during an Istanbul snowstorm.

In January 2017 heavy snowstorms and freezing temperatures hit Istanbul. Multiple volunteers helped dogs to weather the storm by laying down cardboard, covering them with warm blankets, and giving them food. Some local stores even opened their doors to the stray animals to help them survive.

7. A Filipino boy opened a shelter for stray animals.

A little 8-year-old boy was spending all of his time and pocket money feeding stray dogs and cats in the neighborhood. His dad helped him arrange The Happy Animals Club and made his story public. People from all over the world started donating money so that little Kevin could open an animal shelter.

When a man ended up with 2 free tickets to the Spain vs The Netherlands football match, he didn't sell them. Instead, he gave them to one of the boys walking around the stadium, hoping to see the game from a distance.

9. A 4-month-old baby survived a tsunami.

It was a real miracle when a 4-month-old girl was found alive among the rubble after an awful tsunami and earthquake in Japan. Soldiers from the Japanese Defense Force found her 3 days after she was swept from her parents' arms. The girl was reunited with her father, who luckily survived the natural disaster as well.

10. A volunteer gives some water to a koala during a forest fire. 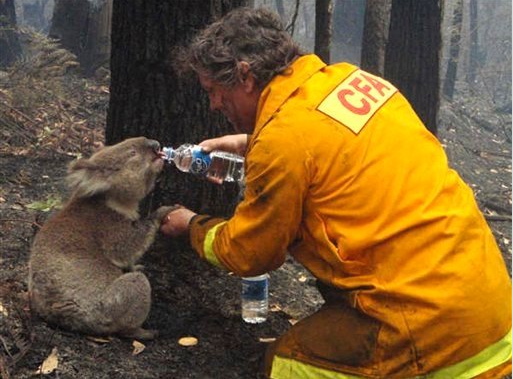 During the terrible bushfires in Australia in February 2009, fireman David Tree found a thirsty, burned, and injured koala and gave it some water which it happily drank from a bottle. The koala survived the fire and was looked after at an animal refuge.

11. A group of protesters gave a birthday present to an officer.

When a riot officer begged Brazilian protesters not to make a scene during his birthday, he did not expect any birthday presents. Yet, not only did he get his desired moment of peace, but he even got a cake from one of the protesters. This act of kindness made him cry.

Which picture and story was the most heartwarming to you? Do you have your own similar stories to share? Don't hesitate to share them with us and with other readers!

0
0
4
0
20k
© 2014–2020 TheSoul Publishing. All rights reserved. All materials on this site are copyrighted and may not be used unless authorized by the Bright Side.