In the last years of her life, the name of the noblewoman, Cayetana, Duchess of Alba, appeared in mass media on a regular basis. Some publications literally mocked her: an 85-year-old woman married a man who was 24 years younger! Everyone completely forgot that this woman wasn't just a scandalous person, a flamenco dancer who managed to restore one of the most beautiful palaces in Madrid, and a woman who'd fallen in love and renounced all treasures for the sake of her own happiness.

Bright Side thinks that the Duchess deserves for a film or book to be devoted to her. Unfortunately, all we can do now is publish an article about her life. 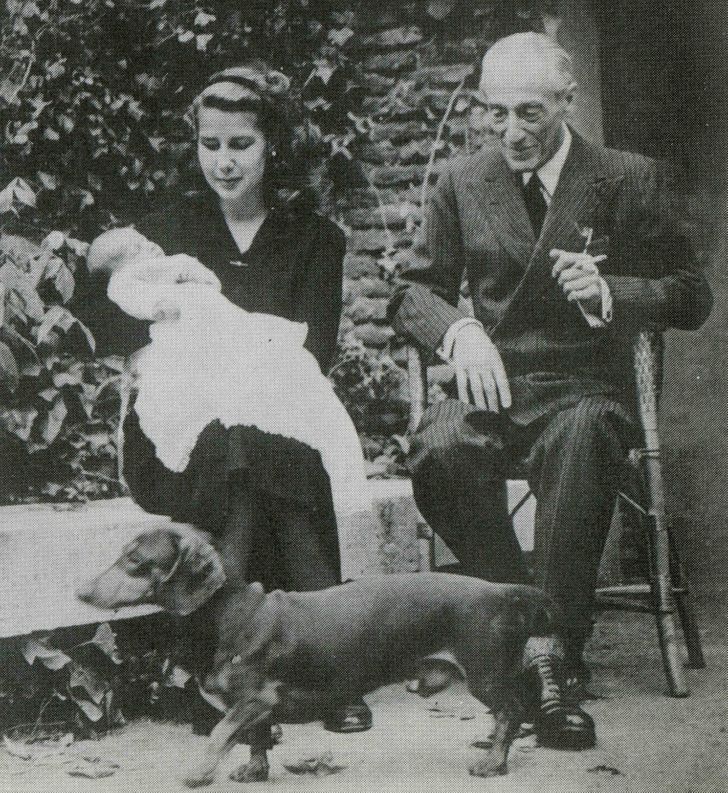 Maria del Rosario Cayetana Fitz-James Stuart y Silva was the only daughter of Jacobo Fitz-James Stuart, 17th Duke of Alba, and a close friend of Spanish King Alfonso VIII. Jacobo was 42 when he married the 20-year-old lady of Spanish Queen Victoria Eugenie. In 6 years, they gave birth to a daughter, Cayetana. The Duke dreamt of having an heir, but his wife started suffering from tuberculosis. To protect her daughter from the infection, the woman didn’t let the girl approach her, so Cayetana barely remembered her mother. In 1934, the young Duchess died. 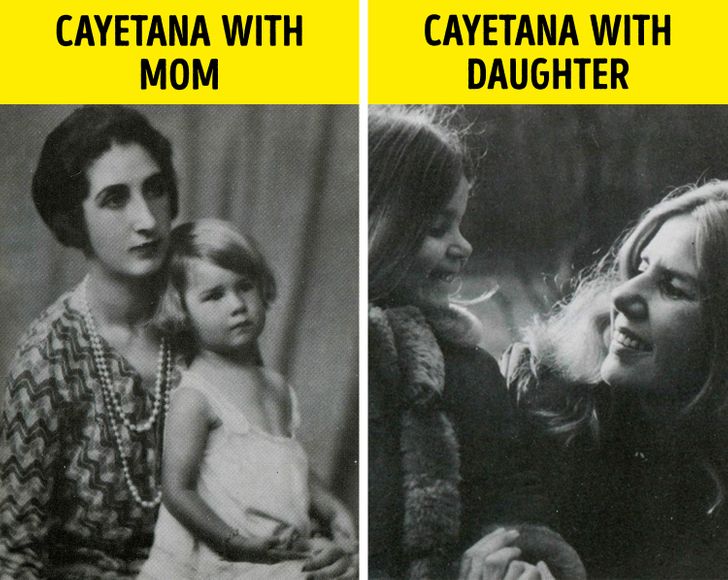 When Cayetana was 10 years old, Jacobo and his daughter had to escape from Spain. Soon, General Franco came to power and invited Jacobo to be an ambassador in Great Britain, and Jacobo agreed.

The girl could clearly remember night bombings and regular escapes to the basement during raids. She also didn't like the climate: she dreamt about returning back to her motherland and couldn't imagine living anywhere else.

Cayetana had more titles than her British friend, so there were rumors that Her Majesty should have bowed before the Duchess. However, this is not true, as there's no more honorable title than a royal. The Duchess was also a monarchist, so she used to curtsy in front of royals. 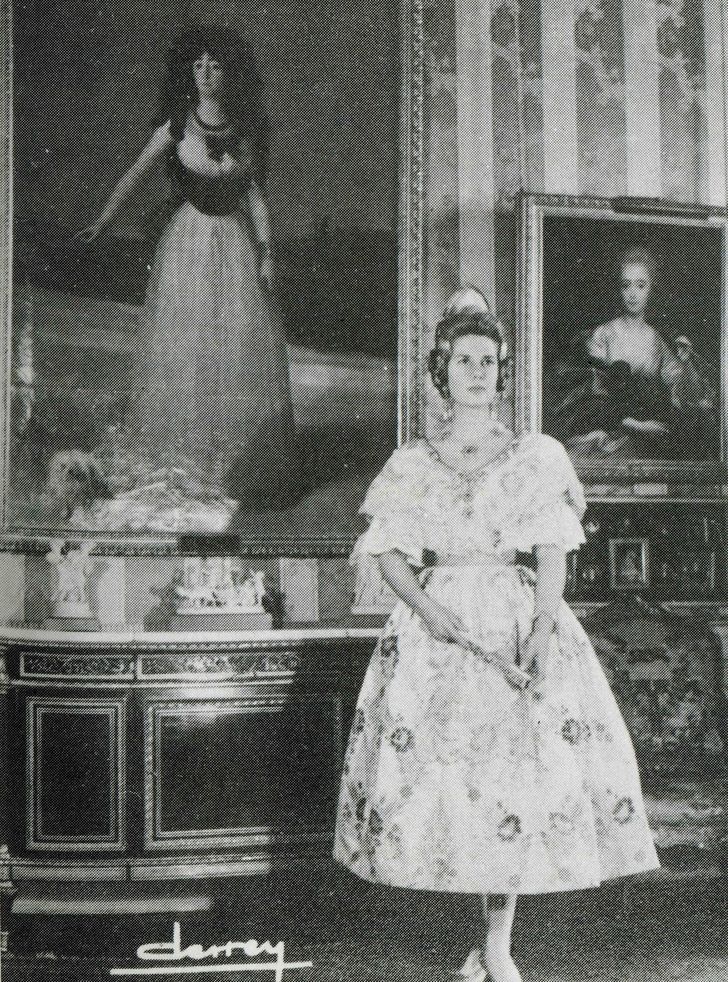 At age 16, Cayetana fell in love for the first time in her life. During one of her trips to Spain, she met bullfighter Pepe Luis Vazquez. He loved her and even wanted to marry her when she was going to turn 18, but her father forbid the romance and sent his daughter back to London.

Her first marriage, 6 children, flamenco, and a failed portrait by Picasso 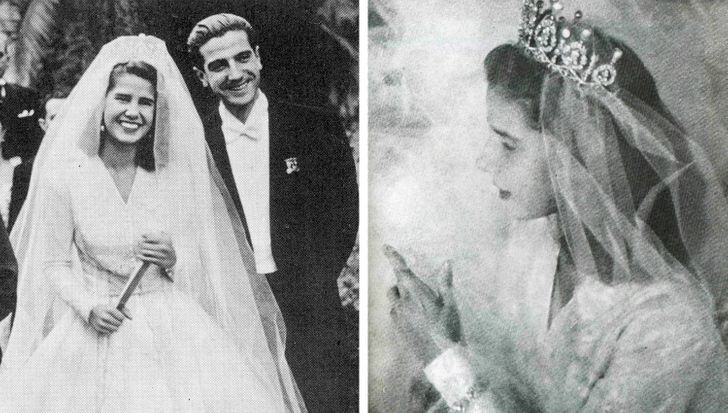 Cayetana wasn’t a classically beautiful woman, but she was attractive with plump lips, nice hair, and a thin waist. She also had something special that made men lose their minds. She chose Luis Martínez de Irujo, an engineer and the descendant of Spanish nobles. He was approved by Cayetana’s father as he was a noble monarchist.

It wasn’t an arranged marriage organized by 2 families. Cayetana and Luis were in love and happy. The Duke of Alba spent around $300,000 (equivalent to around $3.8 million today). It was the year 1947 and Europe, including Spain, was facing tough times. 1 month later, Elizabeth celebrated her wedding which looked less expensive and gorgeous than the Duchess’. Cayetana gave birth to 5 sons and 1 daughter who was her favorite child. There could’ve been even more kids but the young woman suffered from 5 miscarriages. 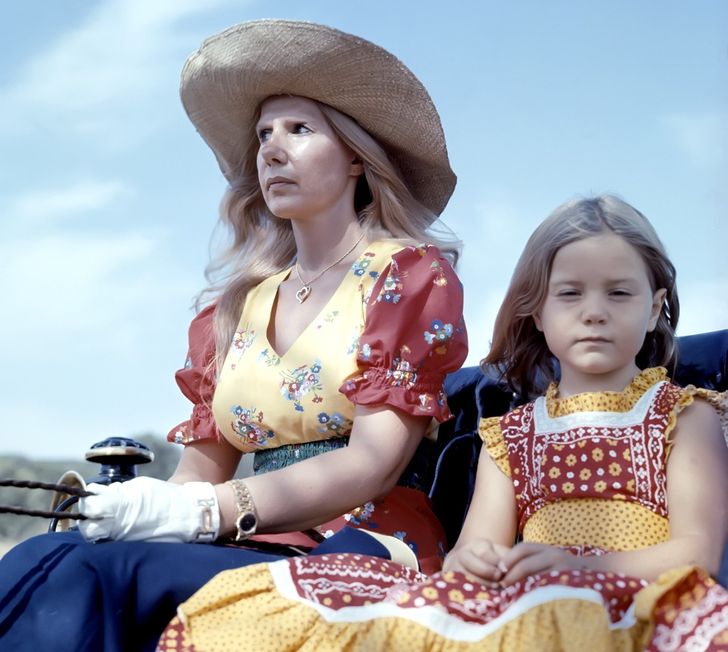 Though she was a diligent wife and mother, Cayetana was a real hurricane. She liked flamenco and danced it better than anyone in Spain. Her hobby fueled rumors that the Duchess’ 4th son Fernando was dancer Antonio el Bailarin’s child, but the woman denied the gossip. Louis supported his wife’s hobbies and paid no attention to rumors. 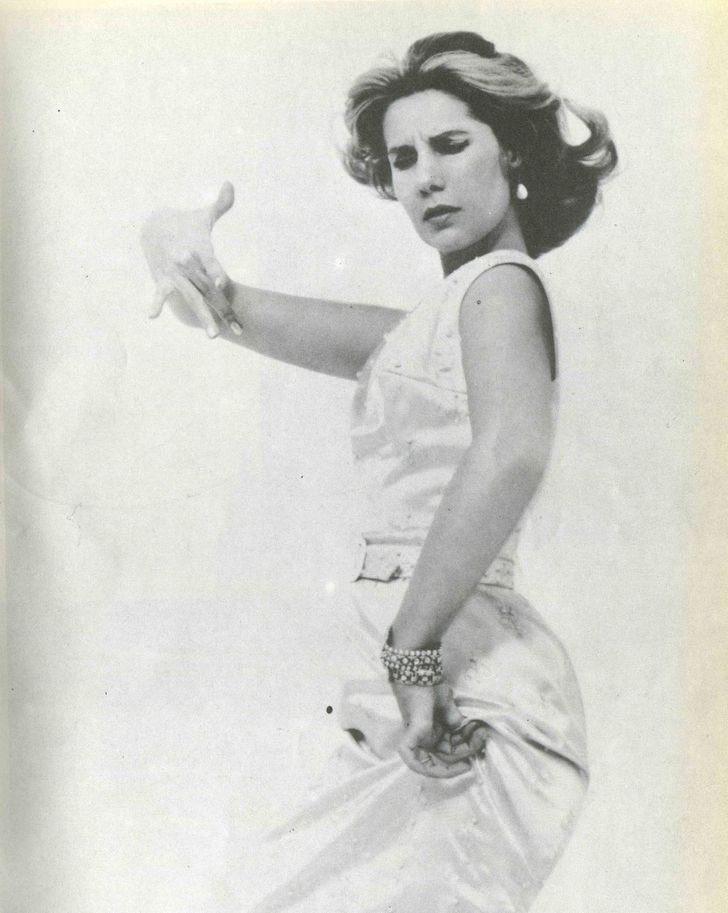 But when Pablo Picasso wanted to draw a nude portrait of her (Goya had drawn her great-great-grandmother’s portrait), the Duchess’ husband was strongly against it. The woman regretted it for the rest of her life. 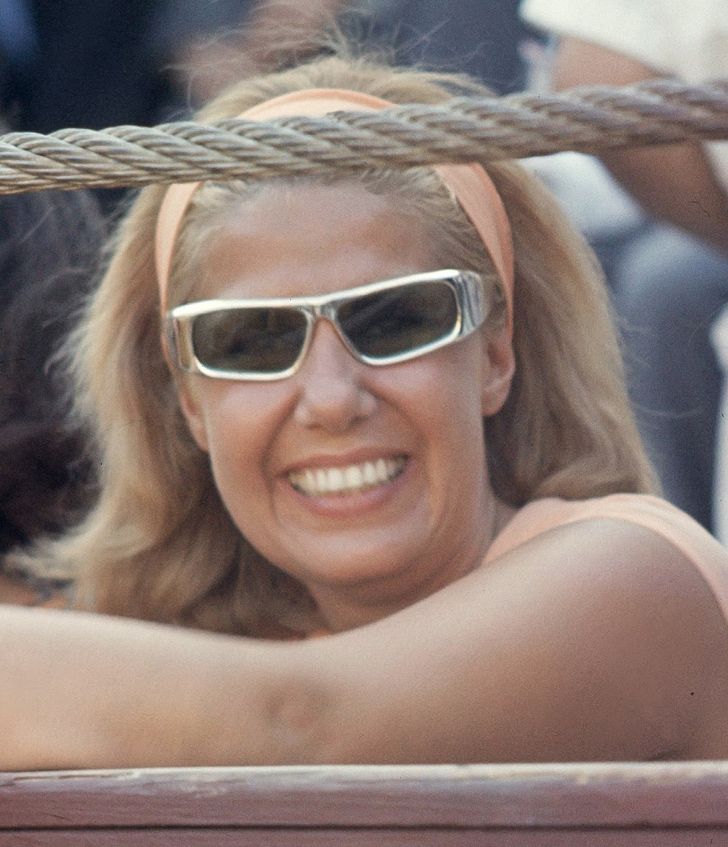 Cayetana and Louis had been living together for almost 26 years when he died from leukemia. The Duchess didn’t want him to know the diagnosis until the very end.

Married to a former priest 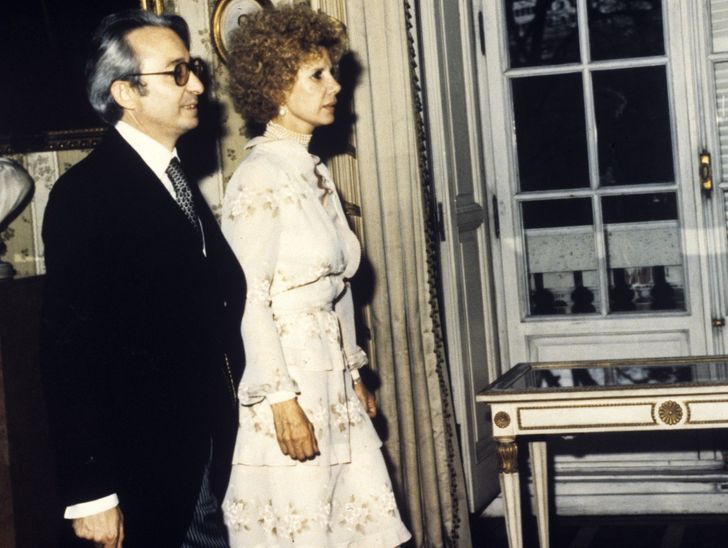 In 1978, the 52-year-old Duchess got married again. 41-year-old Jesus Aguirre, a former Jesuit priest who’d left the priesthood due to socialist ideas, became her husband. This new relationship was criticized by high society, but the young King Juan Carlos couldn’t say “no” due to her Spanish nobility and approved the marriage. They’d been living together for 23 years before the man died from cancer. 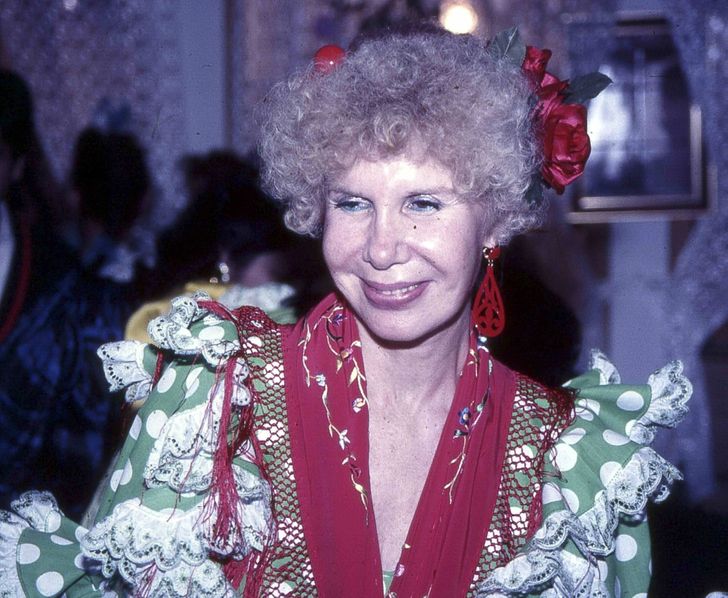 The Duchess tried to cure her depression with cosmetic surgery, but it didn’t improve her appearance. So then Cayetana, trying to escape from aging, started choosing more and more eccentric outfits. Even her children accused her of inappropriate behavior but Spanish people loved her. She was nicknamed “a true daughter of Andalusia” for supporting Seville and the culture of the region, and for the fact that she still danced flamenco at age 70 while suffering from leg pain. 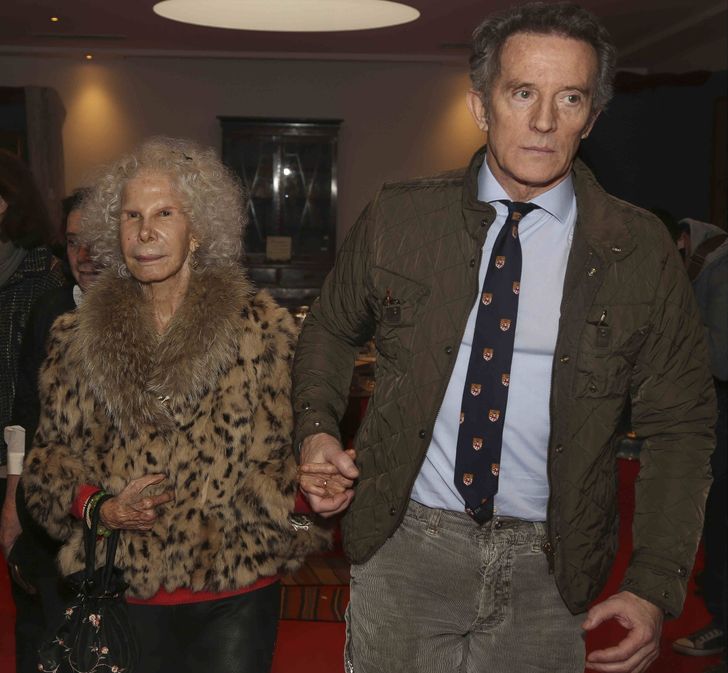 Alfonso Diez, who had known the Duchess for 30 years, saved her from depression. The civil servant was 24 years younger than the woman, but he fell in love and proposed to her. Cayetana said yes and suddenly, all of high society was against her. This time, Cayetana’s children were extremely dissatisfied: they thought Alfonso was only after the family’s money.

Mass media often used to defame the young man and laugh at the Duchess. The Spanish King didn’t want to approve the marriage but couldn’t resist since she was nobility. So there was only 1 condition: only direct heirs had the right to run the house of Alba. 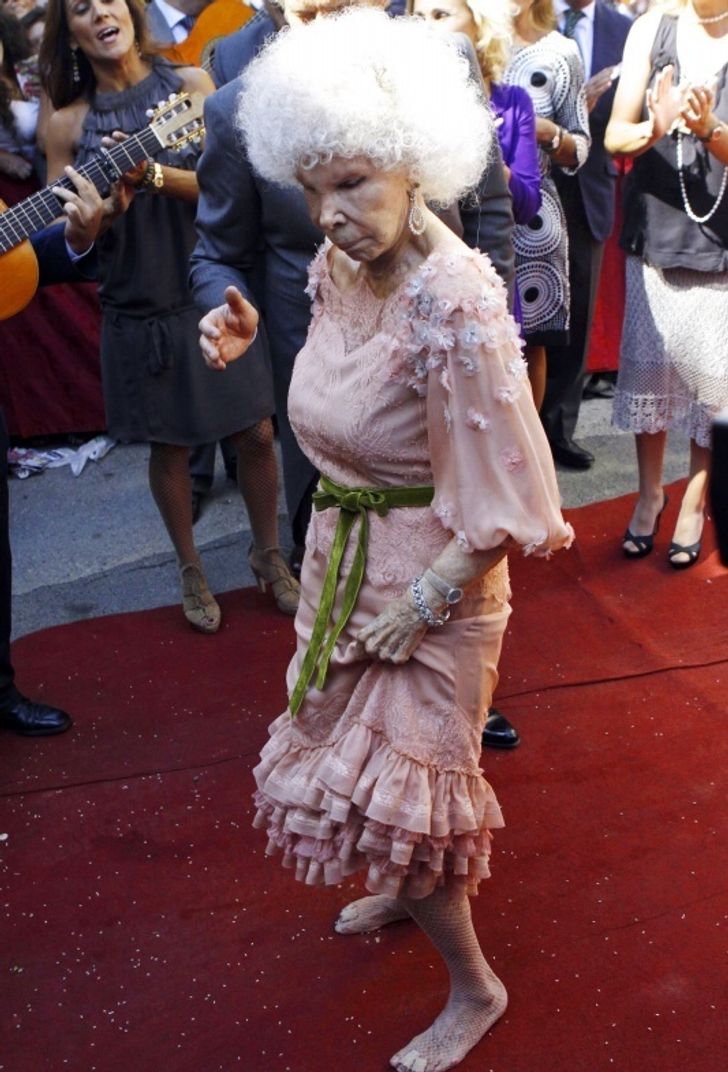 In 2011, Cayetana gave all her money (approximately $3.5 billion) to her children and married Alfonso. At her wedding, the 85-year-old bride danced flamenco. The young husband proved he didn’t need the Duchess’ money that fast. It was he who persuaded Cayetana who used a wheelchair to move to undergo more surgery.

After the surgery, she could walk on her own again and later, together with her young husband, she went to Ibiza where she attracted paparazzi’s attention with her patterned bikini. She still would wear vivid and provocative clothes: she wore a dark red dress with colorful tights, mini skirts, and fishnet stockings. Cayetana said she felt like when she was young and wanted to put on clothes that suited her best. 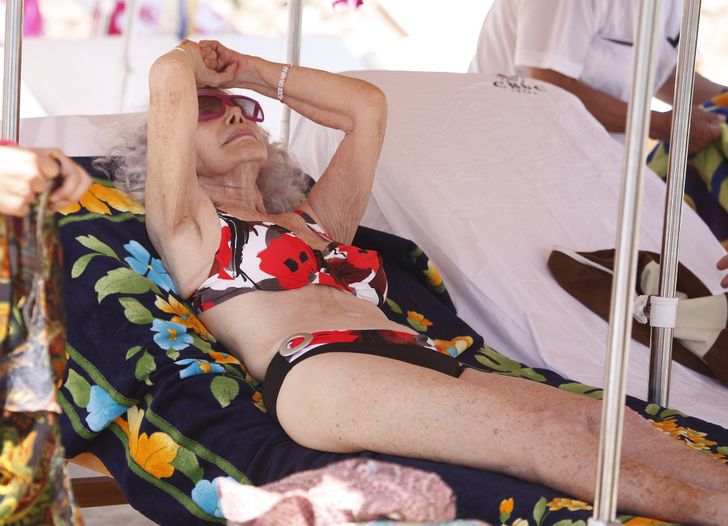 Unfortunately, this marriage lasted for just 3 years. In 2014, she was sent to the hospital because of pneumonia and acute gastroenteritis. The Duchess refused to be hospitalized, though she understood her diagnosis was quite dangerous, especially at her age. On the 20th of November, 2014, the noble woman passed away.

What do you think about this story? Do you support or condemn her?