We try to learn new things about other countries through TV shows, movies, books, and Instagram photos. But you can only truly understand more about a country once you’ve lived there for some time. This is especially true about Japan: it seems that it will always have something to surprise us with.

Bright Side has looked into the blogs of people from western countries who moved to Japan and we want to share both their big and small observations about this amazing country.

1. Japanese women regularly have their faces and arms shaved. 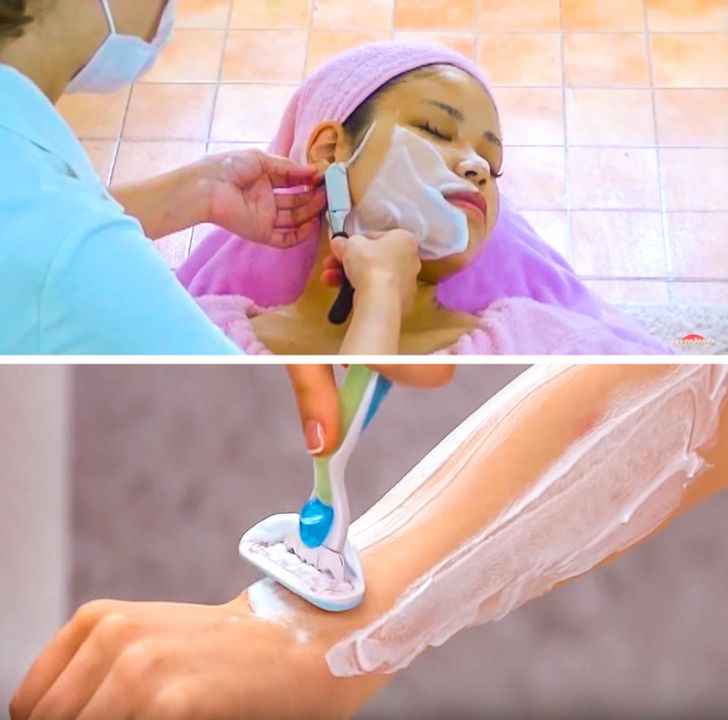 In Japan, women get their arms shaved. The hair on the arms is considered to be something completely inappropriate and those who move to Japan have to get used to this habit. In addition to that, many women keep their entire faces shaved including the cheeks and the forehead. Some of them do it once a month and some do it by themselves every day at home. They buy special razors that are sold in local stores.

The service of hair removal from the entire body (except eyelashes, eyebrows, and hair on the head) is very popular. In the summer, salons that provide such services start promoting themselves actively, offering discounts and so on.

Men also shave. They often have their faces shaved in salons in order to avoid having to shave every morning. In order to look perfect, they trim their eyebrows and pay a lot of attention to how they look. For example, foundation on a man’s face in Japan is considered to be something completely normal. 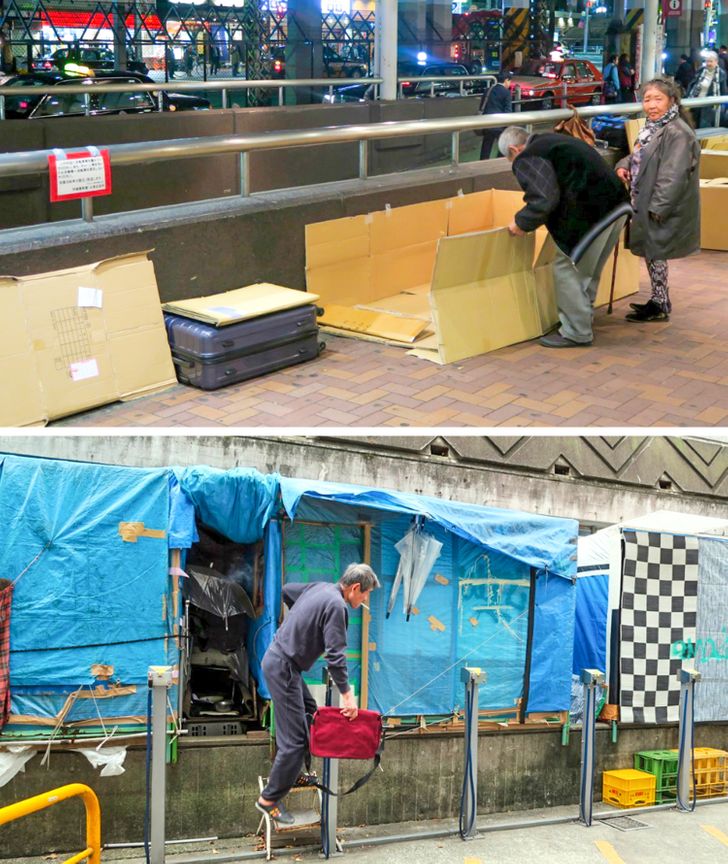 Because apartment prices are very high, not all Japanese people can afford to rent one. This is why there are many homeless people in the country. Many of them build houses using cardboard boxes. Some of them are so successful at this that they can build something like in the picture above.

Some homeless people build carton box-houses downtown. There are no utilities inside, so these people have to go to free public toilets.

3. Japan has one of the strictest renting policies in the world.

Landlords have very clear rules about the number of people who can live in an apartment. If an apartment is for just 1 person, you can’t always live in it with another person, even if it’s a spouse — the rules are very strict. In some cases, apartments are rented only to women. In the towns that are near universities, tenants aren’t always allowed to practice instruments. Additionally, apartment owners are reluctant to rent apartments to foreigners even if they have a job or if they’ve lived in Japan for several years.

It’s very rare that apartment owners allow tenants to have a pet. And even if they do, you will have to pay almost twice as much for the pet every month. And the pets here are very expensive too. For example, a pug will cost you around $1,000.

4. In Japan, there are special services that can help you move from one place to another. 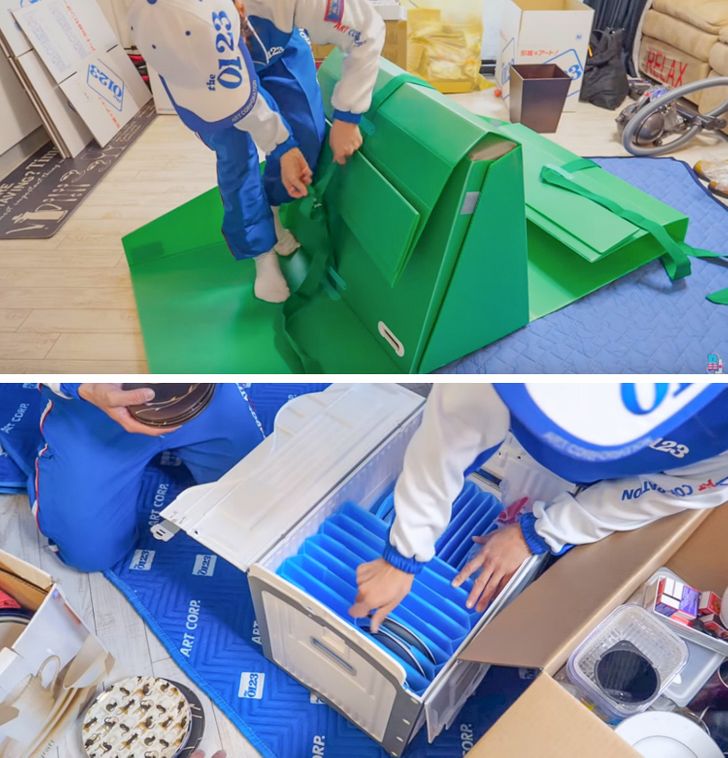 There are special services that collect all your stuff and move it. First, the company will contact your neighbors, apologize for the future inconvenience, the noise, the huge truck, and so on. As an apology, they may offer a box of chocolates or napkins.

Before the movers arrive, an appraiser will come to your place to document all the big pieces of furniture, devices, appliances, and anything fragile. If necessary, the company will get rid of all the old devices that you don’t need and they will install the new house appliances on the day when you move. Before moving the furniture, the walls will get covered with special protective mats. 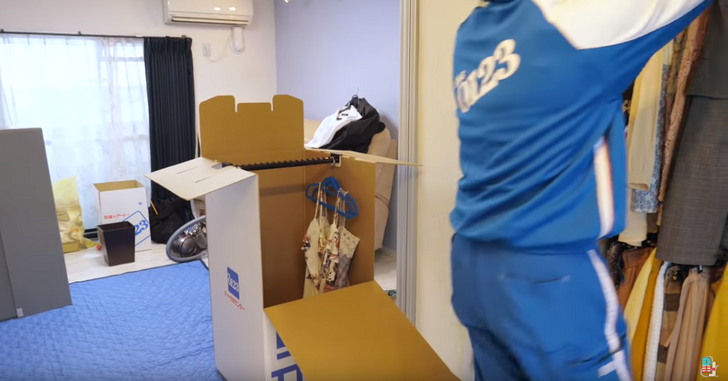 Every single thing is wrapped in paper and clothes aren’t even removed from hangers — they’re put into a special box to be transported as is. Everyone’s shoes are placed into boxes. The workers make a detailed plan of the location of every single thing in order to sort the items in the new place as they were before. 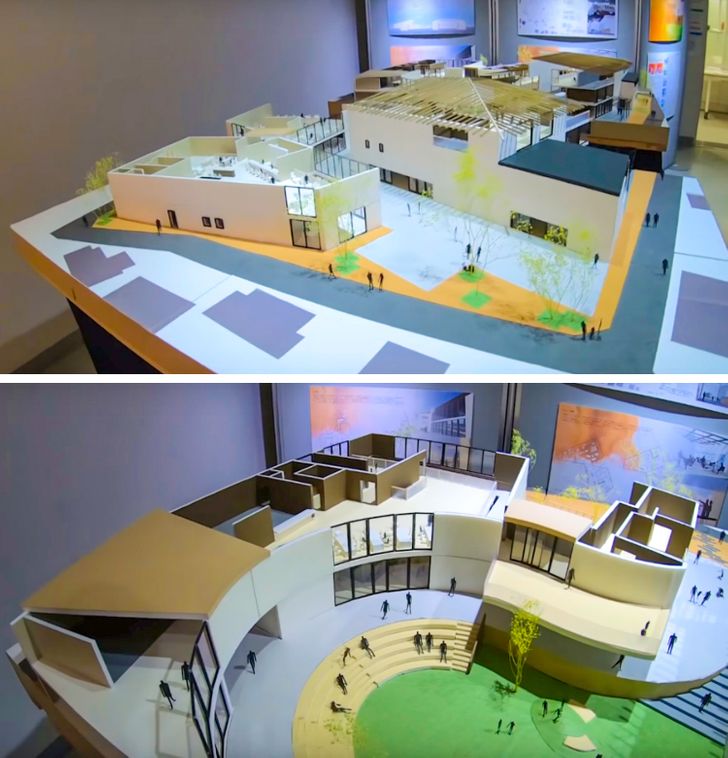 Students spend at least several months doing their senior projects (like the one in the photo above). But students have about 6 months to complete them because most of them already have contracts with an employer and they don’t need to spend time on sending out resumes and going to job interviews.

They are hired in March and April, 1 year before graduation during the so-called “job-hunting period”. Students start sending out resumes to companies during their second-to-last year of school.

Those who fail to find jobs at big companies within 2-3 spring months try their luck at average and small companies that hire students in summer or even fall. Interestingly, big companies don’t hire people with dyed hair (no matter their gender) or those who have beards.

6. There’s a law in the country that makes people get rest. 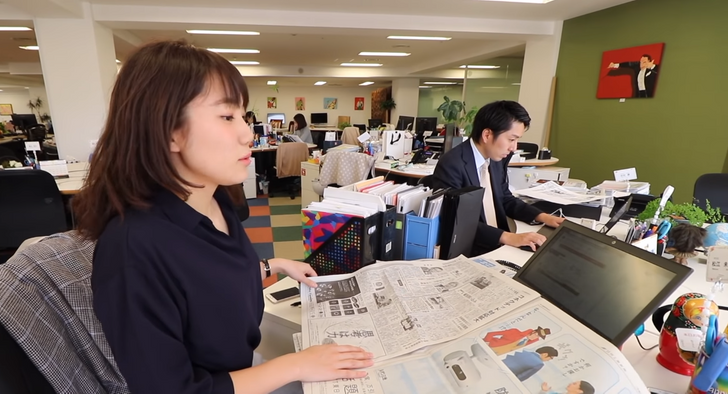 Many Japanese people only rest on Sundays and their salaries can often include overtime work. If a certain company doesn’t pay overtime, it’s considered normal to just go home at the agreed time according to the schedule. Employees have about 10 days of vacation (including the sick leave days). The longer the working experience, the longer the vacation, but the number of days can increase only by 1-2 days.

Because employees often work overtime and rarely go on vacation, after April 1, there is a law in Japan that makes people rest more. So now for 5 days a year, companies have to not work at all (in order for employees to rest more). These days can happen anytime during the year. Additionally, people are prohibited from having more than 45 overtime hours per month (otherwise the company will be fined). Today, they can’t work after 10 PM or before 5 AM, otherwise, the workers will have to have 2 mandatory health checks (instead of just 1), and the company has to pay for them.

7. Stress from working overtime led to the love of cute things. 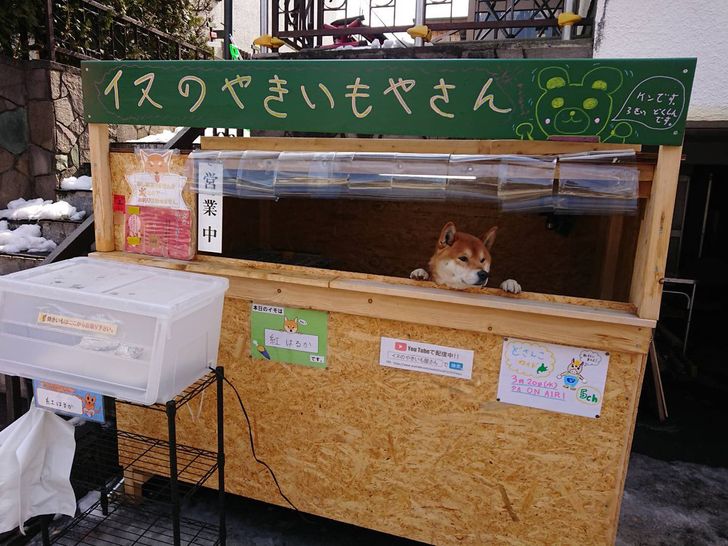 Maybe, it’s the workaholism that made Japan the leader in cuteness (pertaining to their cosmetics, clothes, and other products). In order to relieve stress and tension, people often drink a couple of glasses of beer after work and women like to go to stores and buy cute things. Because of their high demand, there are a lot of really cute, little weird things to buy. Recently, someone opened a store where you can buy food from a Shiba Inu dog. And there’s a note next to the dog that says, “I’m a dog so I can’t give you change.” All the change is given to the dog as a tip.

8. There are a lot of small rules in Japan that have to be followed.

For example, it’s better to take big bags to work even if they’re almost empty, otherwise, people will think you aren’t serious enough (this applies mostly to men). It’s completely prohibited to wear shoes at home even if they’re brand new or you’re just trying them on. People believe that only the dead should wear shoes in the home as part of a long-standing tradition. For the same reason, it is prohibited to stick chopsticks into rice or any other food because pictures of such are usually put next to photos of the deceased.

9. There are disadvantages to the medical system. 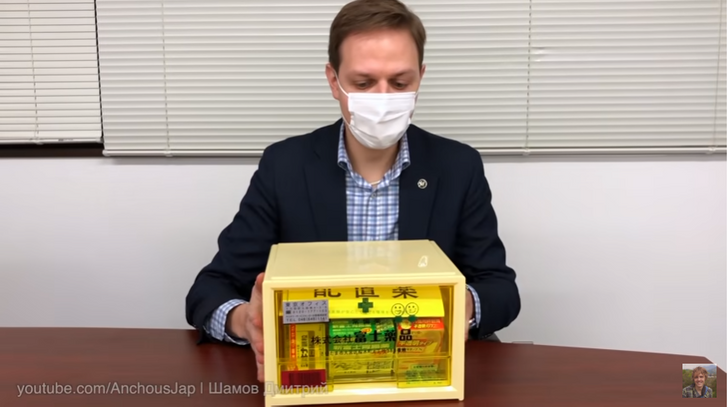 It’s hard for foreign people to get used to Japanese medicine. In this area there are a lot of things that are inconvenient for customers:

But there are also some advantages to these medical facilities. The mandatory medical insurance is about $200 to $300 per month but it covers only 70% of all expenses for doctor visits and medications. Some companies even send free cold medications to companies (like in the photo above). And when the medications are all used up, you can order a new box but not for free. If you call an ambulance, it will come fast and do a great job even if you are not from Japan — and if you have insurance, it will be free.

10. The streets don’t have dumpsters on them but they’re still perfectly clean. 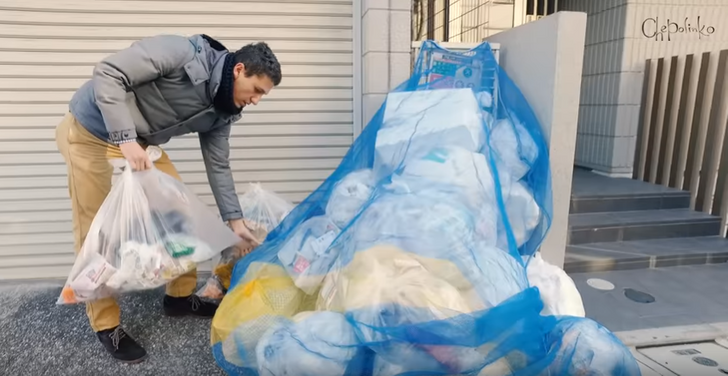 Different types of trash are removed on certain days. For example, food waste is removed only 2 times per week. There are special places in the streets for it and bags are put under a special net.

There are almost no dumpsters in the streets. This is because since you pay for the removal of trash, you should throw it away at home. This is why many Japanese people collect even the smallest pieces of trash and carry them all the way home. And in some kindergartens, mothers are given their babies’ dirty diapers that the children used during the day.

11. Face masks are not only for protection against the cold. 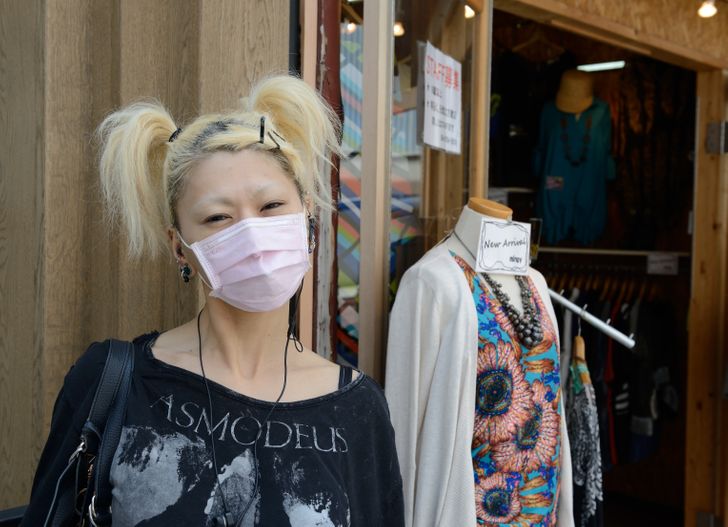 Today, these masks serve a bigger purpose than protection against the cold. They’ve become a cultural statement which is why you can buy cat-shaped ones and the kinds with faces of your favorite anime characters on them. Sometimes, girls will use the masks to hide their faces on mornings they ran out of time to put makeup on. Some people wear masks almost all the time, trying to hide from the outside world: they tell others that they don’t really want to talk. In Japan, people value their anonymity so much that Starbucks even had to give up on the tradition of writing down the names of customers.

12. There’s 2-floor parking because of a lack of free space. 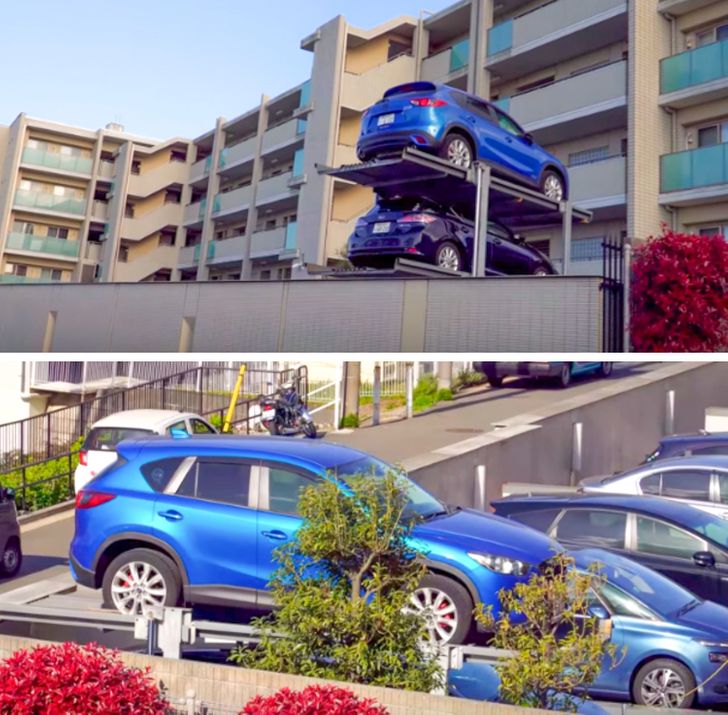 The lower level of the parking lot is underground and you can lift your car using a special controller. The lower level has a special drainage system in order to get rid of water. This very convenient, small garage is extremely hard to steal a car from. The only disadvantage to lots like this is that cars can be too big to fit inside.