To be successful, any restaurant has to make sure that the cost of making food doesn’t exceed 30% of its revenues. All-You-Can-Eat buffet eateries are no exception. A typical AYCE chain produces 85 million rolls, 21,000 tons of chicken products, and 2,700 tons of steaks a year. So, how do they manage to serve us such an abundance of grub without going bankrupt?

The staff of Bright Side looked in on what’s cooking inside the AYCE industry, and the results made us want to forget about dinner! Do not miss the bonus at the end of the article — you’ll find super-useful tips on how to not let restaurants make extra money at your expense!

Crockery manufacturers produce special undersized plates for AYCE buffets. Unlike in ’normal’ restaurants (where you order a couple of dishes, which appear on the table, one after the other), the AYCE format offers a staggering choice of food, all at once. This generates lots of half-eaten leftovers that go into the trash. The smaller plate approach helps to combat this problem.

It is also proven that the use of large plates in self-service restaurants leads to overeating on the part of the customers (something that managers try to avoid in every way).

The AYCE eateries try to base their menus on products that can be bought in bulk at bargain prices. First and foremost, we’re talking potatoes and other inexpensive vegetables.

Usually, All-You-Can-Eat buffets’ stalls are bursting with potatoes and rice, while fish and meat come in small pieces, and in very modestly-sized trays. As a result, we don’t get the chance to gorge on expensive products, and we fill our stomach with something cheaper instead.

3. The higher the entrance fee, the tastier the food (and this isn’t about quality!)

Studies show that the price of dishes affects the customers’ perception of the food’s quality and taste. Recently, an experiment took place at one of the AYCE Italian lunch buffets. Some visitors were charged $4 for the pizza, while others had to pay $8 for the same dish. In the end, those who paid $8 rated their meal higher than the ones who spent half that money.

According to research, our expectations for food are based on many different criteria, including price. Therefore, the higher the bill — the better the dishes appear to taste!

The self-service restaurants benefit from attracting clients with poor appetites. For this reason, they often position themselves as family-friendly. A typical family consists of one or 2 hearty eaters and several people (grandparents, small children) who aren’t likely to down much food in one go.

In addition, kids often go for dishes that are the most profitable for the buffet: sweets, chips, pizza, etc. All this stuff is really cheap to stock and produce.

5. The staff doesn’t rush to re-fill the trays with expensive food.

You may have noticed that in AYCE buffets, the trays with side dishes are constantly re-filled, while the meat and seafood trays stay half-empty for a long time. The reason is that the waiters are instructed to not rush with serving fresh helpings of expensive products. At the same time, cheap belly-fillers must be always available.

Not all customers are willing to wait for crab or shrimp — many choose to fill their plates with pancakes and such (exactly the choice the restaurant wants them to make). The fact that the dirty plates are not changed promptly is no accident either — this discourages guests from going for a second helping.

In self-service eateries, customers seldom complain about the food — they just check out a different tray. This allows the management to create a ’flexible’ menu, saving on meat and fish. For instance, AYCE buffets stock tilapia instead of pricey salmon, or buy cheaper types of meat.

Another common practice is substituting veal with pork. With all the breading and seasonings, most people don’t even notice the difference.

7. The air conditioning is switched off on purpose.

Sometimes, AYCE restaurants intentionally switch off their air conditioning. High temperatures in the room reduce our appetite for meat and seafood. When feeling hot, people are much more likely to eat fruit and drink soft drinks (so much so, that they’ll even pay extra money for it!).

To be profitable, AYCE buffets must, in all ways, discourage their customers from staying too long or eating second and third helpings. Therefore, you’re unlikely to find a TV set on the premises, or manage to catch a good Wi-Fi signal!

9. Some trays come with large serving spoons, others — with small tongs.

Quite often, in AYCE restaurants, trays with pasta, salads, and rice come with huge ladles. However, to put some salmon on your plate, you have to use small and clumsy tongs!

This trick is meant to ensure that customers eat more of the fast-filling carbohydrates and less of the costly proteins. After all, most people would feel uncomfortable with delaying the line because they’re trying to grab a piece of meat or fish with tongs.

10. The location of the food trays affects our choice.

Positioning food trays on the buffet line is a tricky science in itself! Studies show that 75% of customers take the food from the tray that’s first in line. Moreover, 66% of all the food a person eats at a buffet is likely to come from the first 3 trays he or she comes across. Therefore, the staff always fills them with nourishing and inexpensive products.

Even the classy, expensive buffets that have a $98 entrance fee employ similar tactics (trying to make the trays with the truffles and the foie gras as hard to find as possible).

11. Buffets save on staff by letting the customers serve themselves

AYCE eateries save a lot of money by letting their visitors serve themselves. In some buffet chains, they go as far as to allow the customers prepare and pour out drinks.

Besides, most dishes are cooked in advance — all you need to do is warm them up. As a result, AYCE buffets don’t have to maintain a large kitchen staff. In a ’normal’ restaurant, a chef prepares meals for 25 people per hour; a self-service system allows the restaurant to feed up to 200 people at once!

12. The majority of AYCE buffet customers don’t ’out-eat’ the sum of the entrance fee.

On average, a self-service buffet customer eats about 4 plates of food. However, to get close to ’beating’ the entrance fee, he/she needs to empty more than 7 plates. According to statistics, only one person in 20 manages to do this, while 4 out of 20 eat very sparingly.

13. If you eat too much, the staff will force you to leave the buffet. 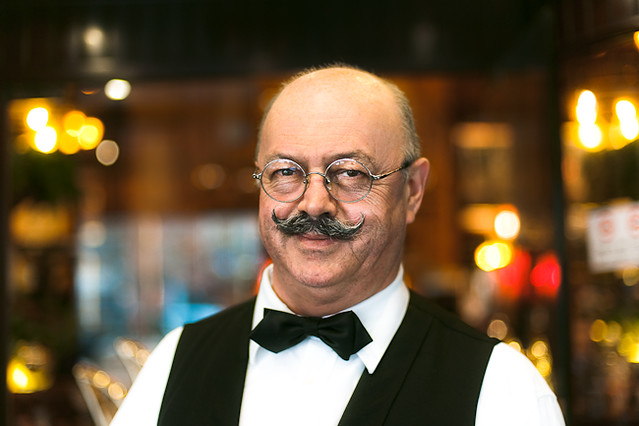 Even if you really try to eat as much as you can, you’re unlikely to defeat the system: the staff will take note, and you’ll have to leave the buffet. For instance, a German triathlete was recently kicked out of a self-service restaurant after consuming 80 plates of sushi.

The same fate had befallen a woman who managed to empty a trayful of brownies, and a man who ate 12 fish steaks in a row!

14. AYCE Eateries charge you extra for food left on your plate.

When you come to a self-service buffet, you naturally want to try every dish being offered. Almost inevitably, this generates a lot of half-eaten leftovers. Many restaurants attempt to deal with the problem by introducing ’fines’ for any food left on the plate. The amounts range between $1 and $3. Nevertheless, because of leftovers, AYCE eateries trash about half of the food they prepare.

Many AYCE buffets sell drinks separately. In these cases, the ​​​​​​markup can exceed 90%. However, even when the price of drinks is included in the entrance fee, the buffet is still making money. This is due to the fact that drinks are cheap to stock. Also, the more soda a person consumes, the less food they are likely to eat.

16. All self-service buffets use sneeze guards. 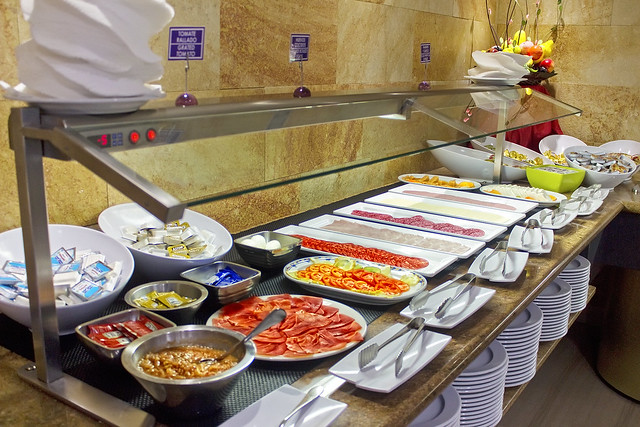 Have you ever wondered about the purpose of the glass hoods fitted at the buffet stalls? Well, those are the so-called ’sneeze guards’ - special contraptions, invented by a man named Johnny Garneau. A successful restaurateur and a life-long germaphobe, Garneau couldn’t bear the thought of people sneezing on food!

Garneau went on to design a visor-like protective cover and patented it in the 1960s. Soon, ’sneeze guards’ revolutionized the food industry, becoming mandatory equipment for restaurants with self-service buffets.

17. The dangers of frequenting All-You-Can-Eat restaurants

Usually, food trays are replaced every 4 hours. Time enough to accommodate a full life cycle of several generations of bacteria! According to research, germs breed the fastest in foodstuffs that are kept at temperatures between 39°F and 140°F.

Tongs and ladles that customers use to put food on their plates can become a hotbed of infection, as well. Plus, it’s always best to steer clear of stale-looking fruits and vegetables. Incidentally, lemons are the riskiest products on the menu — their juice is oh so attractive to microorganisms!

Bonus: How to make the most out of your self-service buffet visit

Have you eaten at any self-service restaurants lately? Was the experience an enjoyable one? Share your stories in the comments below!

10
0
20
5
21k
© 2014–2020 TheSoul Publishing. All rights reserved. All materials on this site are copyrighted and may not be used unless authorized by the Bright Side.