© 2014–2022 TheSoul Publishing.
All rights reserved. All materials on this site are copyrighted and may not be used unless authorized by the Bright Side.
2-1-

12 Reasons Why Everybody Adores Adele

15 Pictures That Left Us Scratching Our Heads for Hours 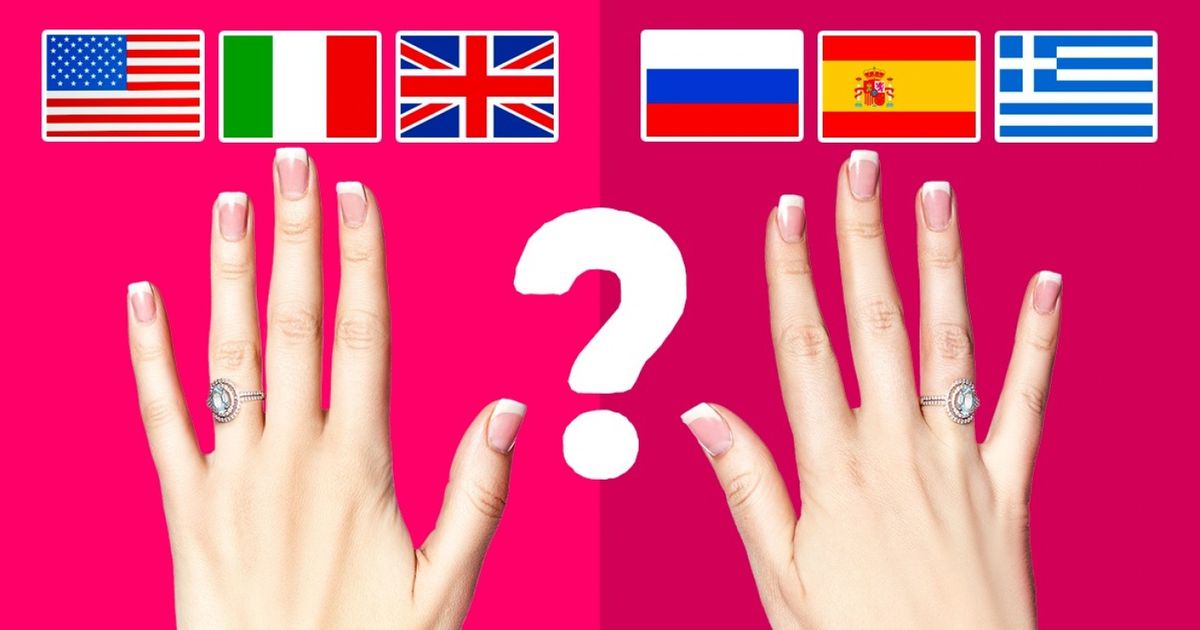 Why Do People in Some Countries Wear Wedding Rings on the Left Hand and in Others — on the Right?

Traditions...we rarely think about them in everyday life, but they often have great cultural and historical significance.

Today Bright Side decided to find out why married couples in some countries wear wedding rings on their left hands, and in other countries - on the right. It's always extremely interesting to learn such small but important differences.

The ancient Romans and Egyptians had a belief that the ring finger had a nerve or vein directly connecting it to the heart. The Romans even had a special name for it: "the vein of love" (lat. vena amoris). If a person put a ring on the ring finger, it meant that their heart was already occupied.

And here's another explanation, no less beautiful and romantic.

The ancient Romans were the first to wear the wedding ring on the right hand. They believed the left hand was unhappy and "unreliable."

For many years, it has been customary in India to wear rings only on the right hand because the left hand was considered "impure." Nowadays, it's permitted to wear wedding rings on any hand.

In Germany and the Netherlands, couples wear golden engagement rings on their left hands and wedding rings on the right. It signifies the change in social status.

According to Jewish tradition, the fiancé puts the ring on his fiancée's index finger of the right hand. After the wedding, women usually wear it on the ring finger of the same hand.

Wearing the wedding ring on the left hand is a relatively recent tradition which was born only at the beginning of the 18th century. Before that, even in English-speaking countries, the rings were worn on the right hand.

This article of 1869 suggests that in some countries the change of hand on which the ring is worn from the right (dominant hand) to the left (nondominant) became a sign of respectfulness with which the woman relates to her husband (men didn't wear wedding rings at that time).

In Lebanon, Turkey, Syria, and Brazil the wedding ring is worn on the right hand before the wedding and on the left after it.

In Sri Lanka, the groom wears the wedding ring on his right hand, and the bride wears it on her left.

Wedding rings aren't accepted in most Muslim countries (the tradition of exchanging rings is also absent in the religious marriage ceremony). But if it's still worn, it can be both on the left ring finger (Iran) and on the right (Jordan).

In countries where the ring is worn on the left hand, after the death of the spouse many put it on the ring finger of the right hand. This gesture symbolizes the unbreakable bond with the deceased spouse.

Before the Second World War men didn't wear wedding rings. Soldiers who fought far away from home and family began to wear them as a comforting reminder that their beloved wives were waiting for them.

If you don't seek to follow traditions or religious canons, the choice of hand for the wedding ring is a matter of convenience and personal preference. For example, some left-handed people choose the right hand to wear the ring simply because they don't want it to fade or get scratched.

Wedding rings are primarily a symbol of your love, and there's no law requiring them to be worn on one hand or another. So the choice is yours!