How the Lives of the Most Famous Twins, Who Share One Body, Turned Out

For 29 years, unique conjoined twins Abigail and Brittany Hensel have been living full lives despite all their physical limitations, the lack of a positive prognosis for a healthy life, and the amazed looks of other people. With their examples, the girls prove that it is possible to overcome any difficulties and make your dreams come true if you really want it.

We at Bright Side dove into the lives of these girls’ thanks to the documentary Joined for Life and their own show Abby & Brittany and we are ready to tell you about these cheerful twins.

The parents of the sisters expected one child.

Abigail and Brittany were born on March 7, 1990, in Minnesota. The birth of the twins was a real surprise for both the doctors and their parents who expected just one girl — ultrasound scans didn’t show the twins or any deviations in the baby’s development.

During her labor, the mother of the girls realized that something was going wrong: the doctors were in a panic and didn’t show her the baby for a long time. When the parents finally saw the twins, they immediately fell in love with them and all the doctors’ fears disappeared.

The lives of the sisters was hanging by a threat from their very first minutes of life. According to statistics, out of 30 million conjoined twins, only one body survives. The internal organs of the others fails during the first 24 hours after birth. And, despite the negative prognosis from the doctors, the twins overcame this and developed like an ordinary child year after year.

They didn’t even discuss the separation of the girls: this solution would either kill one of the girls or would impair the lives of both of them. And the twins themselves were against the surgery: they were used to living together, having someone else near them, someone who can understand and support the other.

Their parents did everything in their power to make the sisters feel like ordinary children, despite the lack of information about their case. The family found a regular school for the girls where they learned not to pay attention to the looks of other people and they found friends.

The family never allowed anyone to do any experiments on the twins, even if it could’ve helped to predict their future development and health condition.

How the body of the girls works 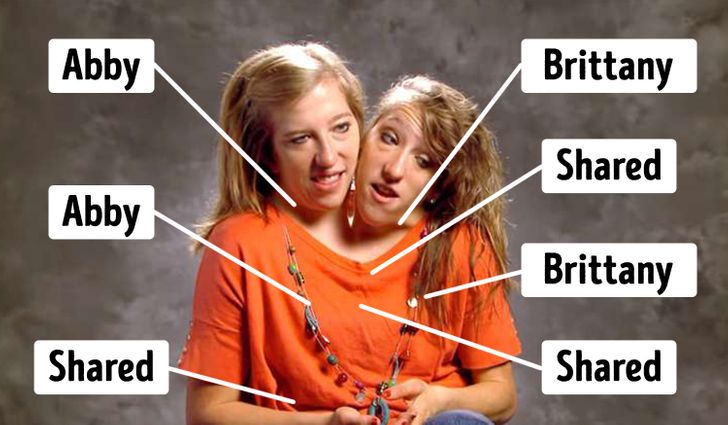 2 heads, 2 legs and arms, 2 backbones, 3 lungs, 2 hearts, 1 liver, 2 stomachs, 3 kidneys, a shared circulatory system, and shared genitals — the anatomy of the girls is unique and doctors still don’t quite understand how their body can work this well.

Each twin can only control her side of the body and they can’t sense the touch of the other sister. For example, Abby doesn’t feel it when someone shakes Brittany’s hand and vice versa. Back when they were children, the girls learned to synchronize their movements and coordinate their actions. It all worked so perfectly that they easily learned to play the piano, swim, ride a bike, and play sports.

Scientists believe that the girls have shared neural connections that no other human body has. This is why the girls can read each other’s minds, write e-mails without consulting the other sister, and even finish each other’s sentences. Also, on the intuitive level, the needs of the body synchronize: when Abby wants to drink, Brittany is thirsty, and when one of them wants to fix her hair or makeup, the other one helps her.

How the twins are different 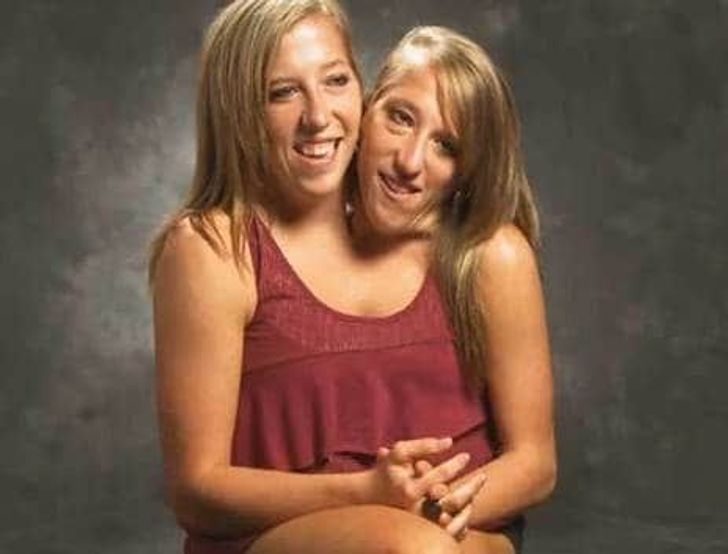 Problems in the development of such a complex body started to present themselves over time. At the age of 12, Abby and Brittany had to deal with one of them: Abby started to grow very quickly and her backbone started to stretch which could result in a break of their shared chest. Doctors had to slow down the growth and save the girl’s lives, but Abby still grew 10 cm, so Brittany had to walk on her toes.

Visiting surgeons, neurologists, pediatricians has been a routine for the twins since childhood. And despite their constant examinations, Abby has already had pneumonia and Brittany had to spend weeks in bed together with her sister.

Despite their similar appearance, Abby and Brittany have completely different personalities and qualities, Abby is an introvert, she loves spending evenings at home, but she loves giving orders, and is scared of heights. Brittany, in turn, despite being quiet, loves spending time with her friends. By the way, even food tastes are different to each of them: Abby hates milk, but Brittany can easily drink it, but she hates meat or fish.

In childhood, the girls often had fights, but now they are able to find a compromise quickly. For example, Abby loves the color purple and Brittany loves the color gold, this is why their room has purple walls with gold shelves on them.

When choosing clothes, they also have trouble — it is hard for them to find comfortable clothes that both of them like. Also, the clothes they choose are changed according to their individual tastes and sizes.

What they agree on is that they don’t like being photographed or stared at. They are okay with answering questions from strangers or having a chat with someone, but people rarely understand them, so the sisters often have to hide behind their friends. 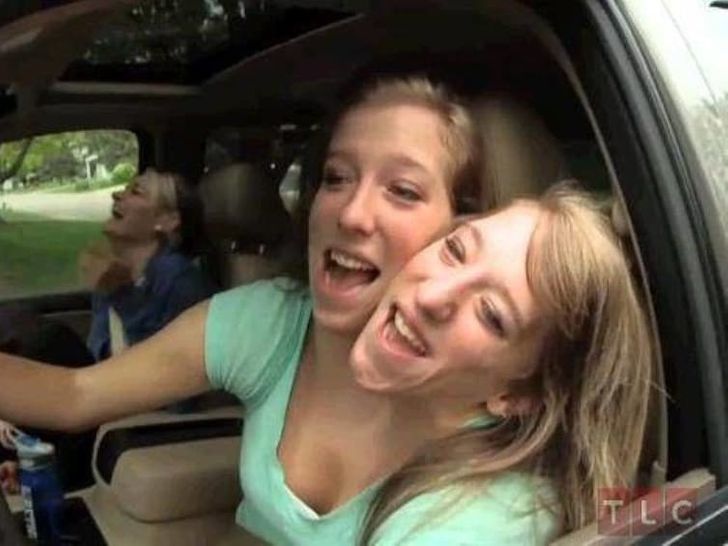 In school, the twins always took their exams separately — they had different tasks and they were watched so they didn’t give each other tips. With almost no exceptions, they had different grades — Abby is good at natural sciences and Brittany has an inclination toward humanitarian subjects.

The girls had a tough time with their driving exam: they had to take the exam twice. Abby controlled the pedals and gears, and Brittany was watching the turn signals and lights.

What the sisters do now 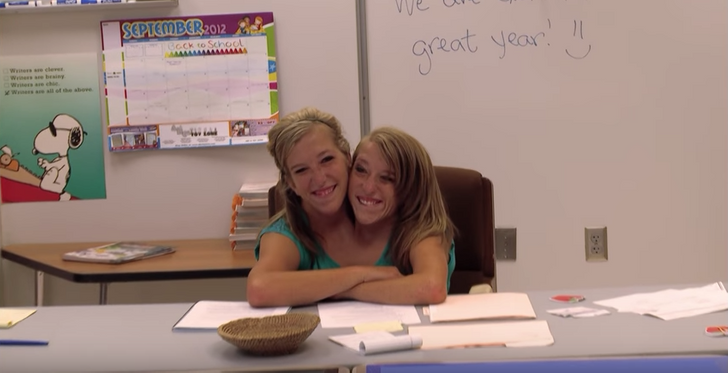 College became another challenge for the Hensel sisters. And they didn’t just do very well, they proved to the entire world that it is possible to have a normal active life even with one body for 2 people.

The girls have always been good with children — during their school vacations, they always worked as babysitters, so it is not surprising that they chose teaching as their job.

By the way, when they were teenagers, they often talked about their wish to have a big family in the future. Doctors assure them that they can have children but in terms of morals, it is a difficult question because they have one body for 2 people.

Now, the girls have different educations and they work in an elementary school, teaching different subjects: Abby teaches math and physics, Brittany teaches literature and history. But they get one pay check for 2, which is not good.

Despite the fact that since 2002, the girls were in the spotlight of the media, several years ago, they decided to stop working with journalists and even stopped updating their social media pages. Maybe, they made this decision after a rumor was going around that Brittany was engaged.

Despite the fact that conjoined twins are extremely rare — about one in every 200,000 children, the Hensel sisters are not the only examples of conjoined twins that live happy lives.

Shivanath and Shivram Sahu were born in a tiny Indian village in 2002. The brothers have 4 arms and 2 legs, but their bodies are connected in the belly area. In 2014, the twins rejected an offer from doctors to separate them.

Their parents abandoned Lori and George Schappell right after they were born when they saw the conjoined heads of the children. But despite that, George became a famous country singer and Lori was engaged and even bowled professionally.

Ronnie and Donnie Galyon are the oldest conjoined twins in the world (they are 68 years old now). Unfortunately, the brothers were not accepted to any schools, so they had to earn money for food by showing their body as part of a carnival attraction and talking about their lives.

Are you surprised at how strong and cheerful the sisters are?