18 Kind Animals That Adopted Other Species

Children should always be surrounded by love, warmth, and care. This rule even applies to baby animals. Those in the animal kingdom instinctively know this and they prove it by their own example. This article will show you unbelievable examples of animals adopting the cubs of other species and it just might touch your heart.

Bright Side collected 18 touching examples for you proving that a caregiver’s love doesn’t have any boundaries in size or species.

18. Albert the sheep and Themba the elephant 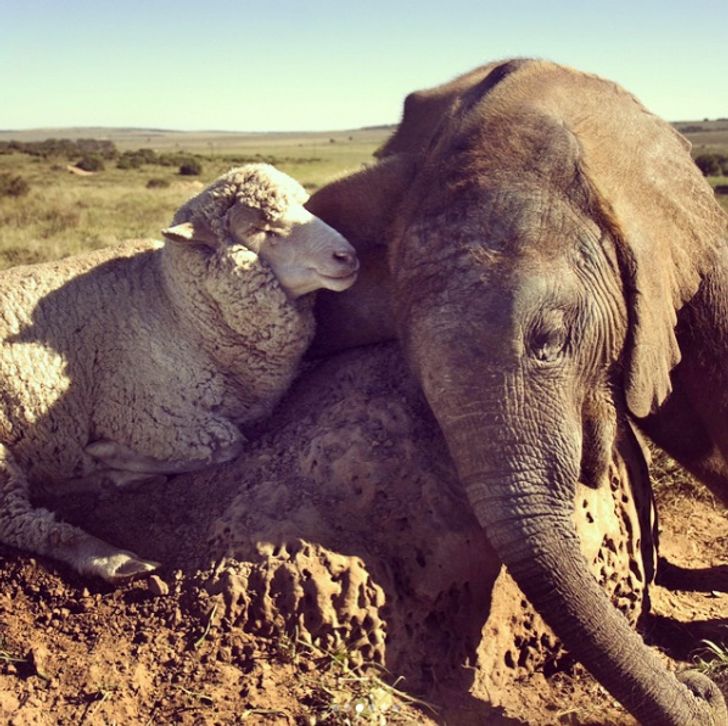 After 6-month-old elephant cub Themba was orphaned and left by her herd, the workers of Shamwari Wildlife Rehabilitation Centre in South Africa decided to save her life. At first, Albert the sheep was a little aggressive toward this stranger, but later his heart melted and he became the baby elephant’s friend and mentor.

17. Owen the hippo and Mzee the turtle 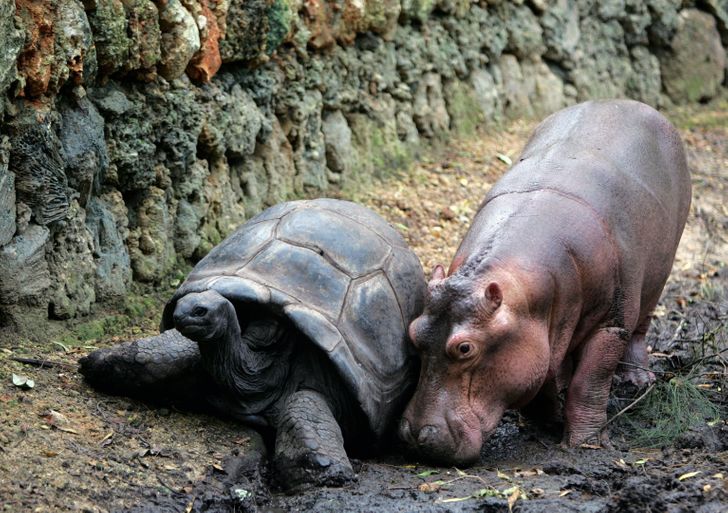 In Kenya, a little baby hippo was saved after being isolated from his family during a severe tsunami. The 650-pound cub was given the name Owen and was placed in an aviary with a 130-year-old turtle named Mzee. At first, Mzee didn’t like its new neighbor, but later Mzee turned into Owen’s mentor for 2 years. The story of this couple is so famous that several books and a website have been dedicated to it.

16. Sai Mai the tigress and her piglets 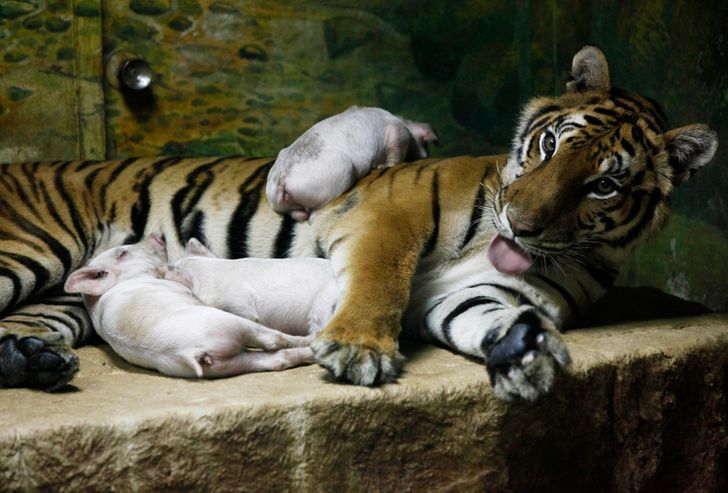 A tigress in a Thai zoo that once was nurtured by a pig, became a mother to several piglets after she had lost her own babies that were born premature.

15. Niv the macaque monkey and a chicken 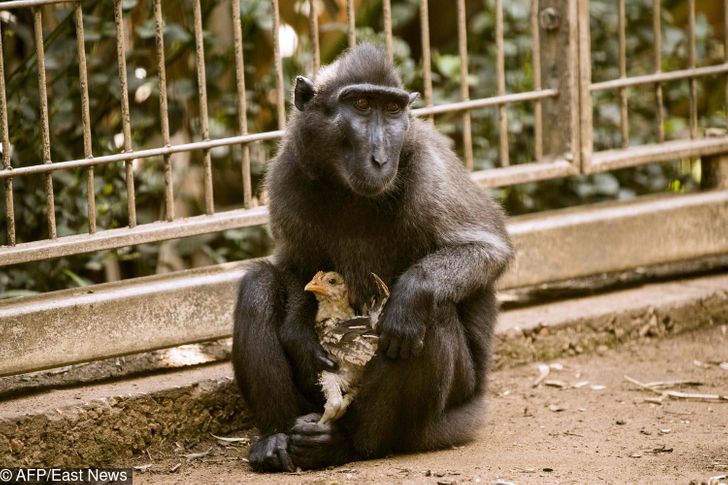 A black macaque monkey named Niv lives in an Israeli zoo in the city of Ramat Gan. Niv couldn’t find a companion among its own species and started taking care of a chicken from a neighboring cage. Niv coddles the bird that always runs to him when it’s feeling scared and is seeking shelter. Sometimes, the bird even stays overnight.

14. Tita the cat and a squirrel cub 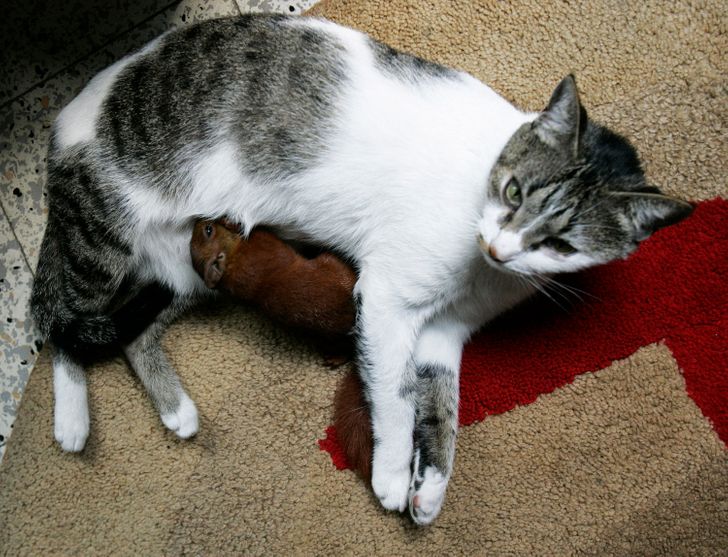 A resident of Colombia, Ruben Gaviria, rescued a wounded squirrel cub and presented it to his cat that was breastfeeding her own kittens at the time. The cat accepted the squirrel as one of her own and the squirrel got his strength back pretty quickly.

By the way, this is not the first known case of a cat nursing a squirrel. There was another case where a squirrel cub named Rocky was nursed by a cat named Emma. And she even taught him to purr like a cat.

13. Kamunyak the lioness and oryx calves 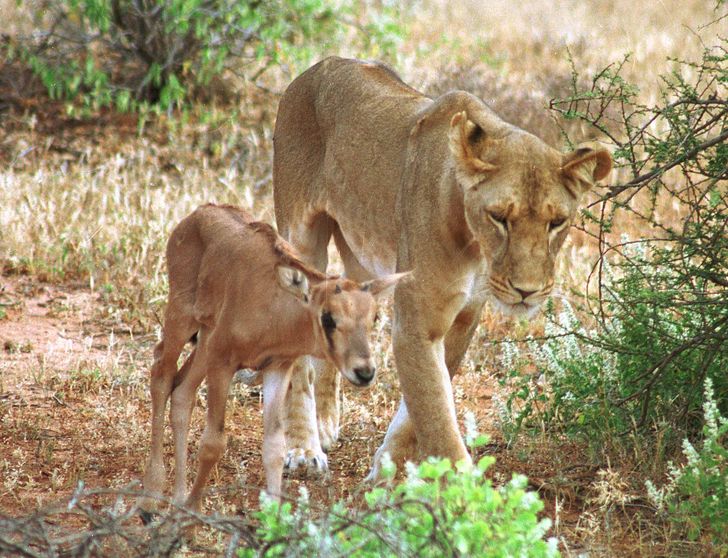 The lioness Kamunyak (’blessed one’) has adopted about 6 oryx calves since she had killed the mother of one of the cubs during a hunt. The lioness couldn’t breastfeed the weak calves so she called on humans for help. She let them feed the babies under her guidance. Unfortunately, the lioness couldn’t protect all “her calves” from being attacked by another lions’ pride.

12. Marquis the cat and puppies 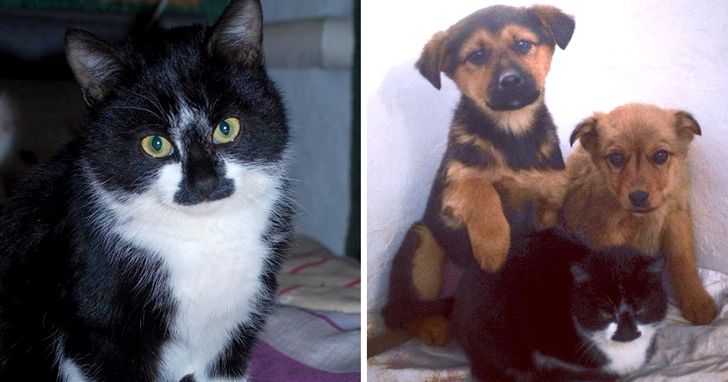 A brave cat rescued 6 puppies last winter in Anapa. Not only did she keep them warm, but she was also catching mice for them to eat. A big family was accidentally discovered by volunteers and today both puppies and the cat have found their forever homes. 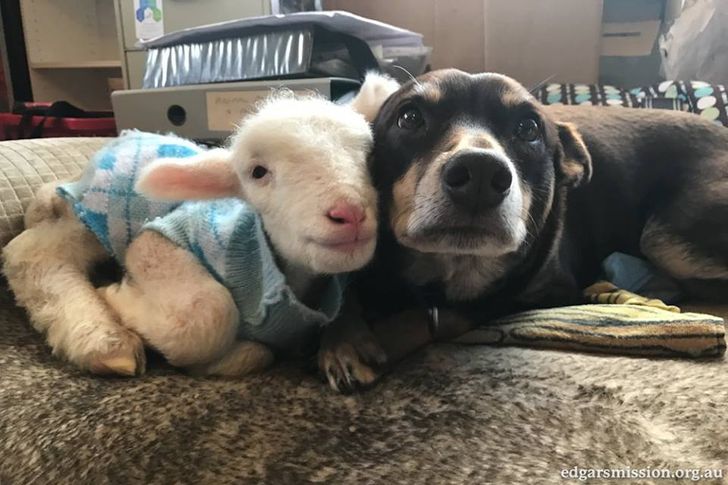 There are many amazing animals living in an Australian center called ’Edgar’s mission.’ This center rescues animals that have suffered from harsh abuse by humans or that have inborn illnesses. Ruby the dog lives there among these animals. Her first owner bought her to guard his sheep but soon figured out that the dog couldn’t perform this task and asked his friend to shoot the dog. At the last moment, the friend took Ruby to ’Edgar’s Mission.’ Ruby has been living at the center since 2009 and has helped many orphaned cubs adjust and get back to a normal life. She became a mother to piglets, calves, a pony, etc. Ruby performs the job of a true vet nurse at the center.

10. DoDo the chimpanzee and Aorn the tiger cub 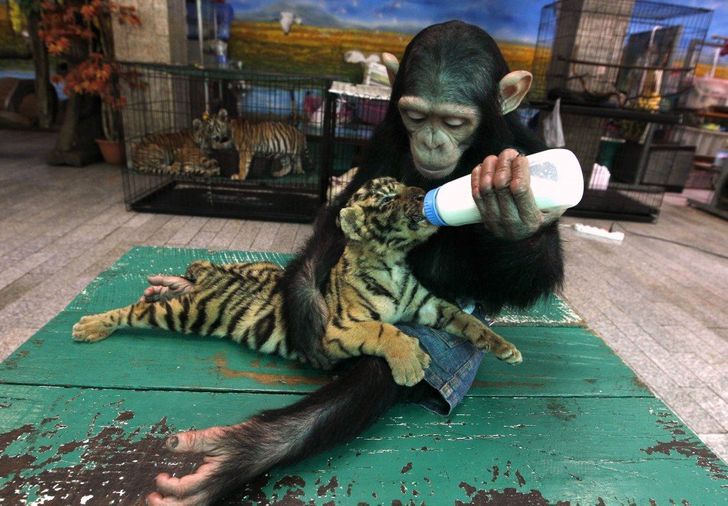 DoDo — a 2-year-old chimpanzee from Samut Prakan Crocodile Farm and Zoo in Bangkok became friends with a tiger cub and started to take care of it. The monkey became a real stand-in parent for the little tiger and was even feeding milk from a bottle to Aorn, completely unaware that this little creature will soon grow into a huge predator.

9. Summer the rabbit and kittens 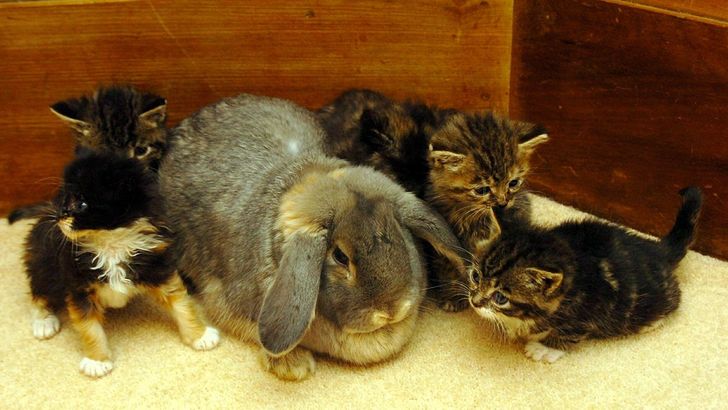 When a veterinary nurse brought home 6 orphaned kittens, she didn’t expect her rabbit Summer to befriend them. Thinking that Summer was their mother, the kittens started to climb all over her trying to nurse. Though the rabbit couldn’t help nurse them, still she became a good friend to the kittens.

8. Bonedigger the lion and Milo the dachshund

A lioness rejected her lion cub at the Exotic Animal Park in Wynnewood, Oklahoma. As it turned out later, she did it because of her osteoporosis and the workers of the zoo decided to move the baby to a different spot in the zoo with Milo the dachshund. Milo took the her new job of raising a lion cub very seriously. Additionally, 2 more dachshunds were involved in taking care of Bonedigger and they also managed to develop a common language with the lion.

7. Noah the pigeon and rabbits

A couple of orphaned rabbits were brought to a rehabilitation center in Texas after a dog attack. A pigeon named Noah, who also needed treatment, was already there and started to take care of the little rabbits. The rabbits grew strong quickly and since then Noah has been entrusted to take care of a baby deer and a baby squirrel.

6. Pretinha the dog and opossum cubs

After their family was attacked in Brazil, these newborn opossums, that hadn’t even opened their eyes yet, were orphaned. Fortunately, they were discovered in time and taken to pet behaviorist Stephanie Maldonado. But even she was unable to provide them with the necessary care because opossums are supposed to be fed every 2 hours. That’s when her dog Pretinha came to the rescue — not only was she feeding them and keeping them warm, but she was also carrying them on her back.

5. A herd of cows and Johann the wild boar piglet

A small wild boar piglet found a home among dairy cows at a farm on the outskirts of Hamburg, Germany. The farmer, Jochen Kraft, has named the piglet Johann and admits that he fits in with his new cow family very well. The cows nudge the piglet gently with their heads and are very friendly with him. It’s likely that Johann lost his family, but luckily he found a new one. And this is not the first case where cows have taken care of wild boars.

4. Ingo the German Shepherd and Poldi the owlet

An owlet named Poldi hatched much later than its brothers and sisters and was very vulnerable in its wild environment. It found its way to Tanja Brandt’s, a photographer from Germany, and not only did he guarantee his survival but he also found a good friend — a German Shepherd named Ingo. Their owner continues to take some very cute photos of this unusual couple.

3. Koko the gorilla and kittens

Not only is the gorilla Koko famous around the world because she learned more than a thousand words in sign language, but also because of her love for kittens. Koko herself couldn’t become a mother, but she shared her motherly love with purring kittens for several years.

2. Kapa and Asya the pugs and tiger cubs

2 pugs adopted 4 tiger cubs at Oktyabrsky Health Resort Zoo in Sochi, Russia. The tigers had already been rejected by their mom who had rejected her other offspring twice. Not only did the dogs help their own puppies grow strong, but also their striped adoptees.

1. Sperm whales and a dolphin

Amazing cases of adoption happen in the underwater world too. A family of sperm whales that were taking care of a dolphin with a deformed spine had been spotted near the Azores. It’s likely that it was hard for the dolphin to keep up with its relatives, so it remained alone and vulnerable until a family of sperm whales adopted it and started to take care of it.

Bonus: Gary the capybara and Flopsy the cat

This couple doesn’t have a story that includes a miraculous salvation or upbringing, but they do have a strong friendship that appeared after their owners fell in love with capybaras and decided to bring one of them home. How could anyone stay indifferent after watching this 100-pound rodent get lovey-dovey with a kitten?

Which of these stories touched your heart the most? Why? Please share your opinion with us in the comments!