Curious, alert, annoying, warlike — neighbors make our lives brighter and teach us to be as patient as those who’ve found Zen. If they all had no quirks, we wouldn’t have a reason to laugh or anything to tell our friends about.

We at Bright Side chose the most famous types of those who we share a wall with and decided to immortalize them in our illustrations.

1. The source of the food smell in the lobby 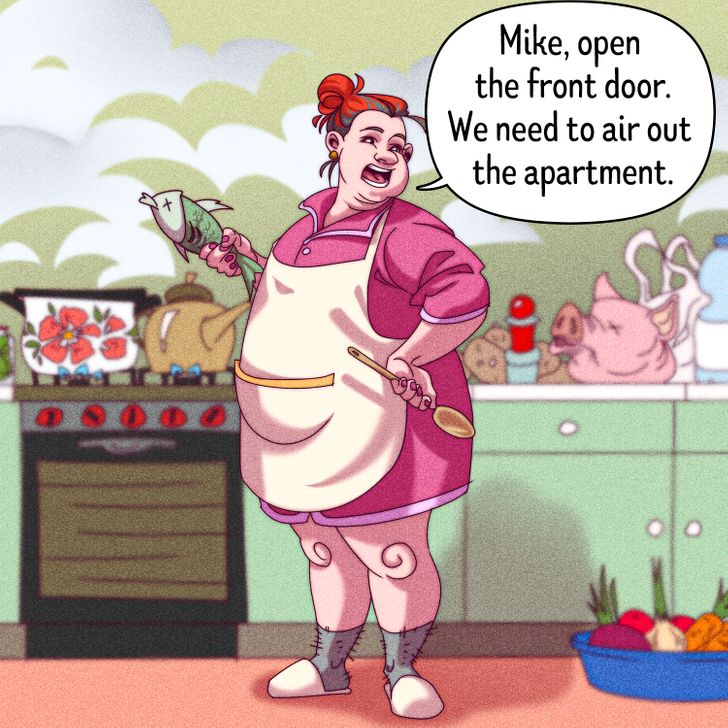 Almost all of us have had a neighbor who constantly cooks something and the whole block of apartments smells the aroma of her soups and fried potatoes. Moreover, she has a preference for onions and fish. 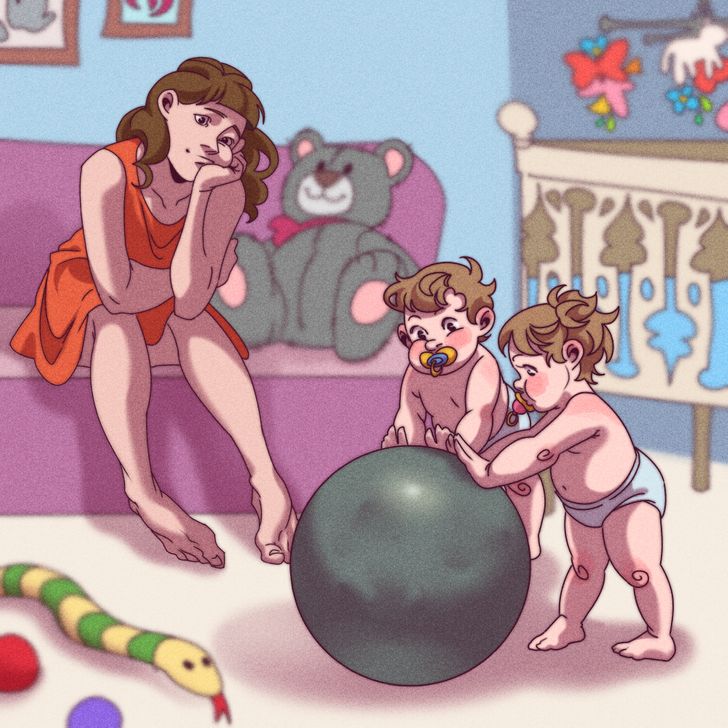 Are you familiar with something that sounds like your neighbors dropping something heavy on the floor or like they are rolling a metal ball on it? In fact, this sound arises due to the redistribution of the internal load of the building and the temperature difference in the reinforcement: it heats up during the day and cools down at night. 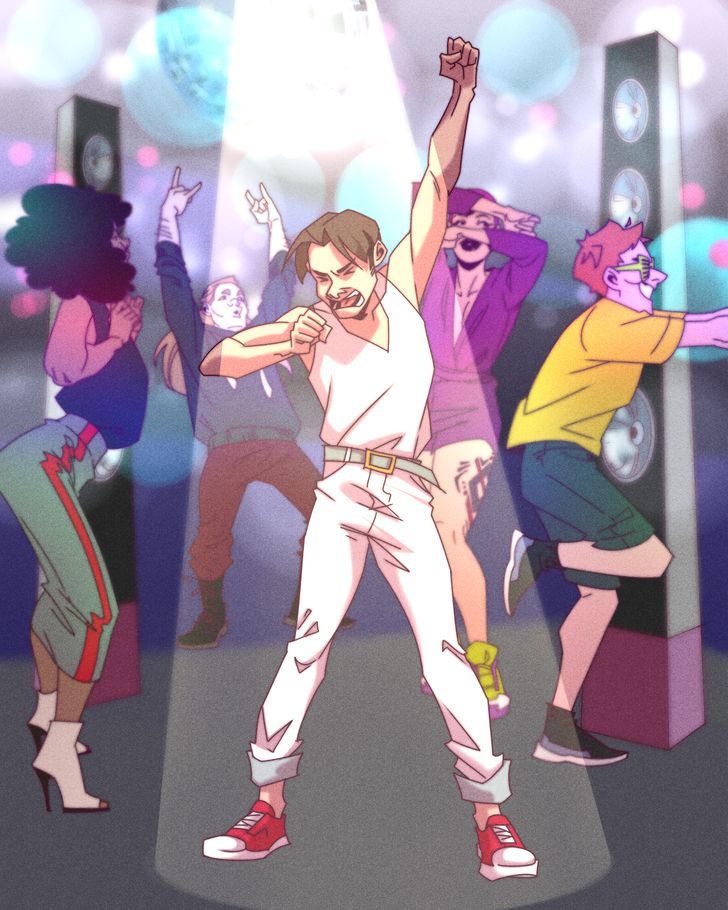 If you have a neighbor who likes to share the sounds of their favorite music with the whole world, the only thing left to hope for is that your musical tastes will coincide. As a rule, this kind of neighbor starts to boast the power of their decibels closer to nightfall and sometimes their music-loving friends might join them too. 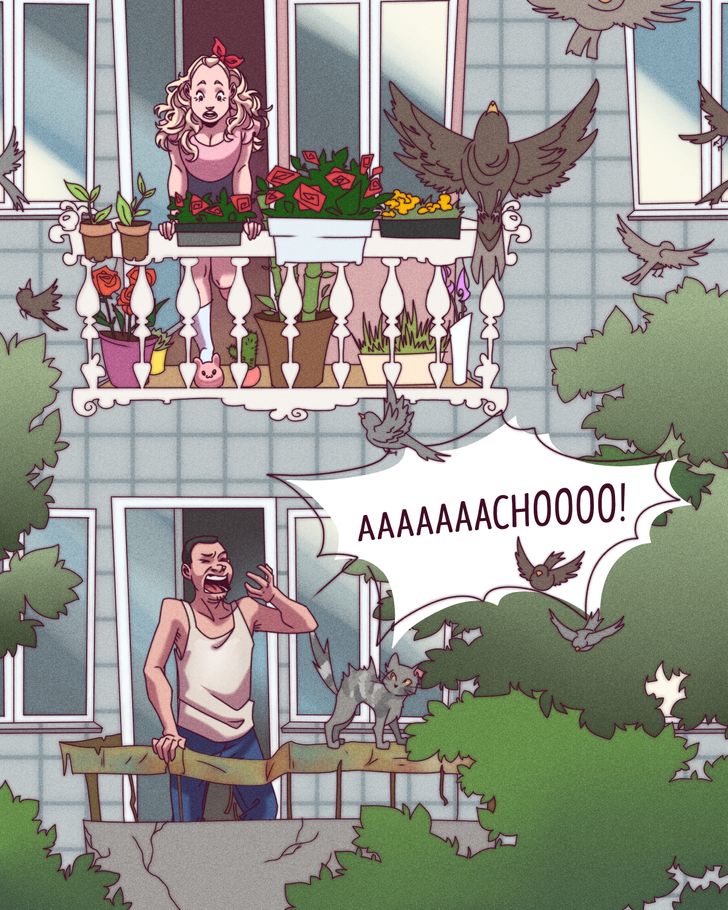 In order to hear this kind of neighbor, you don’t need to be living in an apartment with thin walls because the loudness of his sneezing exceeds the loudness of music from the music-loving neighbor. He also coughs, flushes the toilet, and shuffles loudly. The rest of the time he is almost invisible and inaudible. 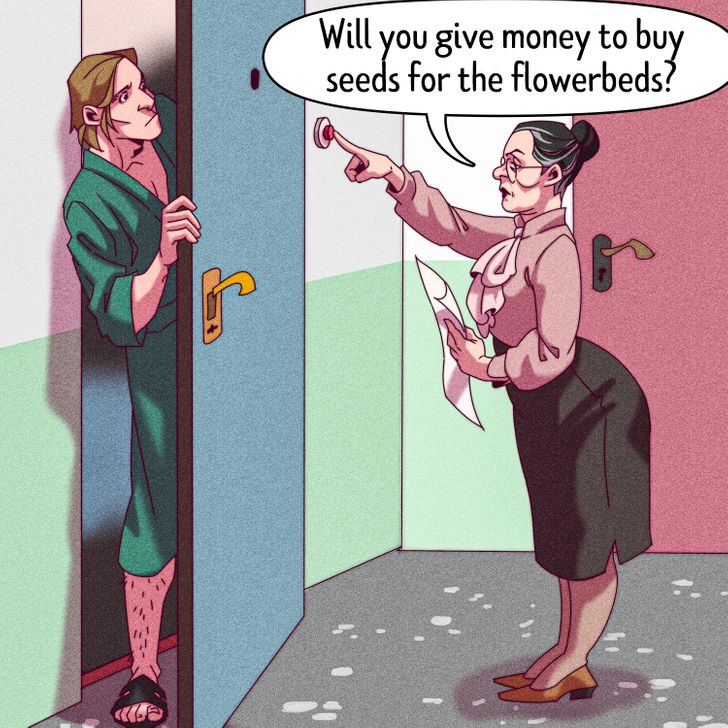 Usually she is the head of the block, who always collects money for public needs. It’s her who takes down the signs in the elevator, tears off the announcements at the entrance, and keeps an eye on the morals of the residents. Whenever they slip up, she is often there with her judgments and ’precious’ recommendations. 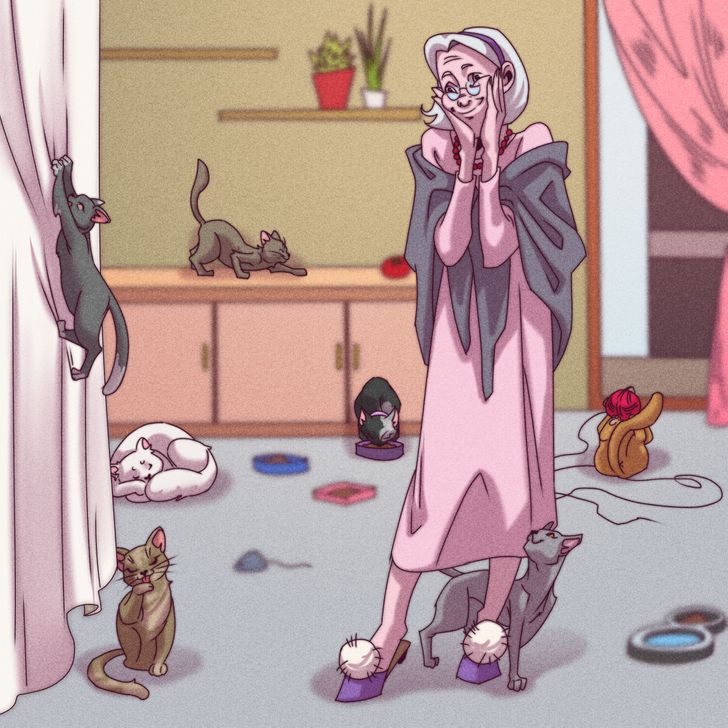 This is a neighbor who likes whining puppies, meowing kittens, and any other creatures that run around her apartment. The whole block might share this love for animals, but dislike the smell coming from her apartment. 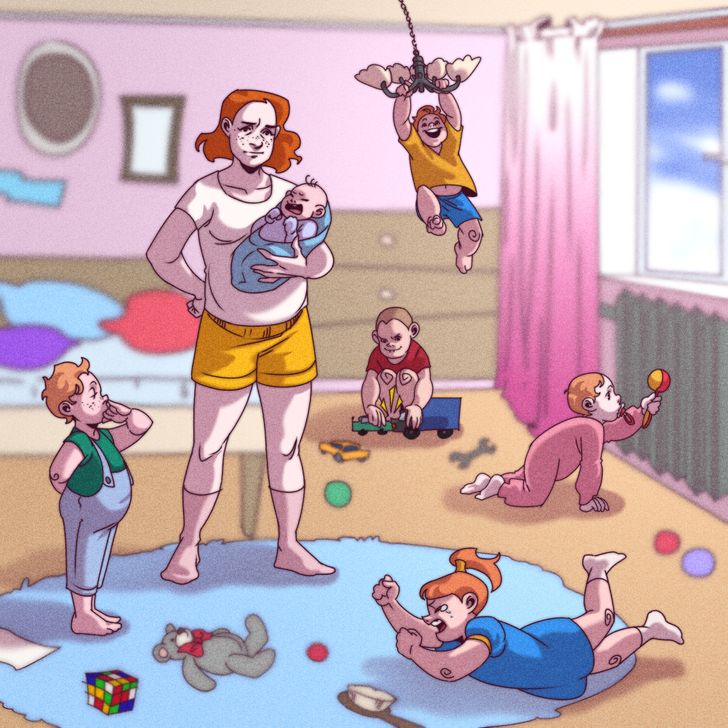 It seems that they have at least 10 kids who play with extremely heavy toys and never sleep. Weekend mornings are the period of their most intense activity, when all the residents of the block understand that little kids are true happiness while also trying to hide themselves from their sounds under a blanket. 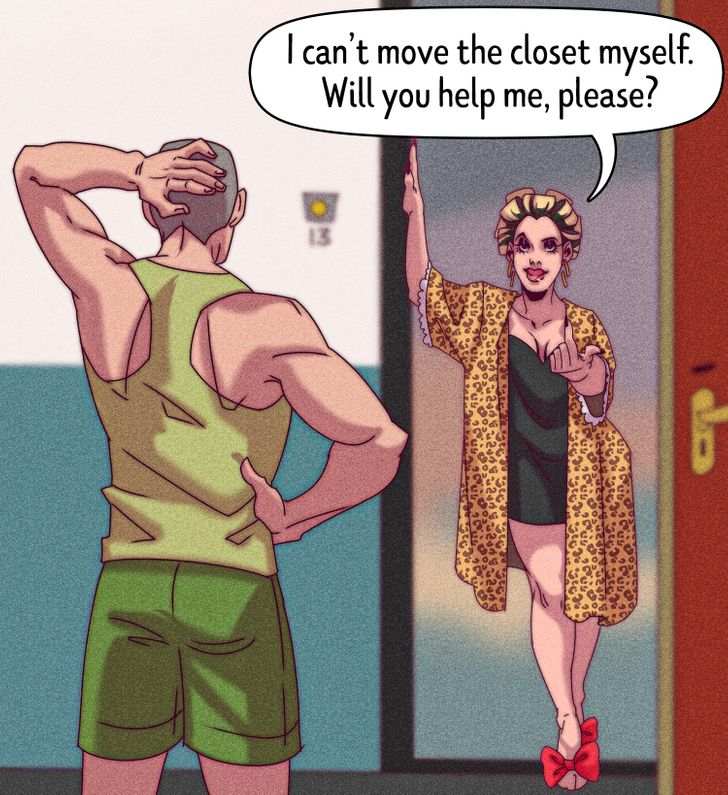 A woman with a difficult destiny who’s looking for love and communication. She constantly needs a man’s strength in order to move a couch or chop a big piece of meat. When all the difficult tasks are over, she shows up again to borrow some sugar. 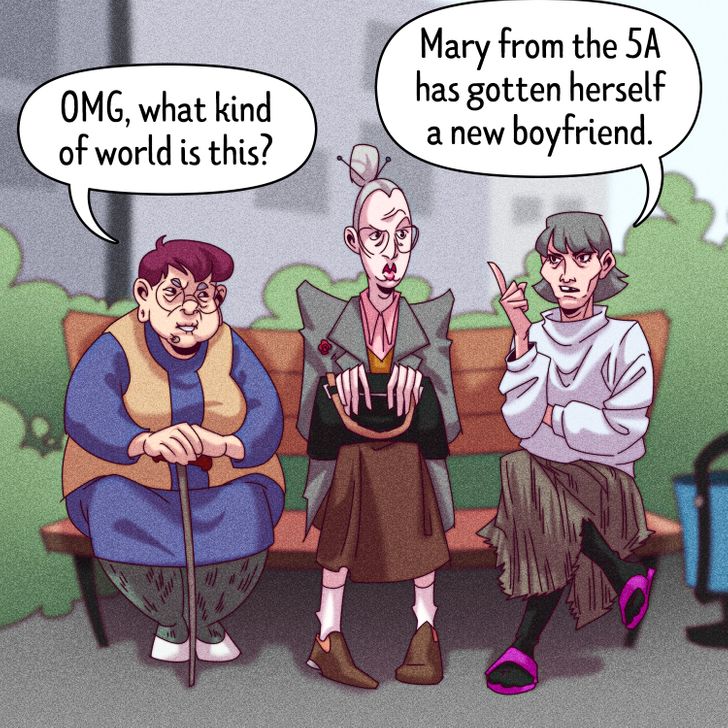 Obtrusiveness is her middle name. She spreads news faster than the yellow pages and social media. She knows everything about everyone. If you see her in the morning, you might end up being late for work.

10. A neighbor who wakes you up on the weekends 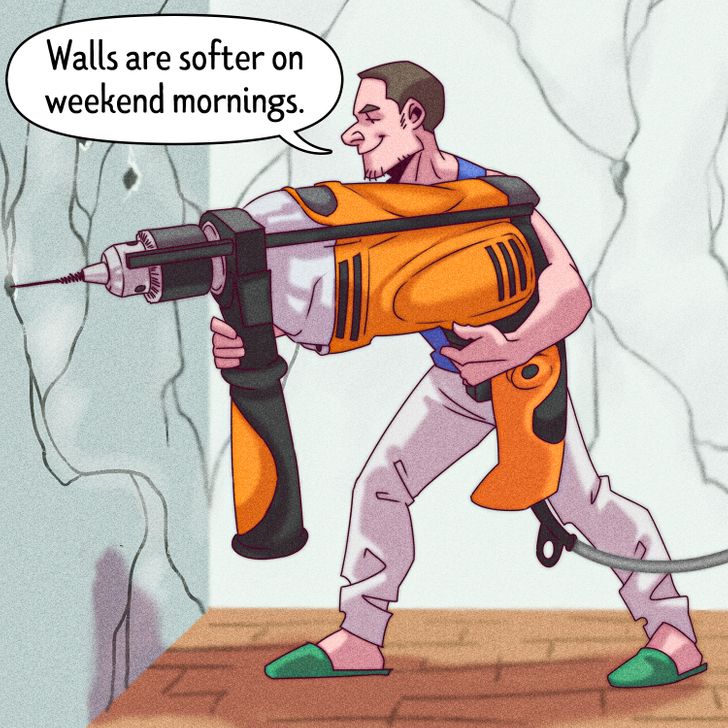 The repairs in this apartment never finish and the person who presented or sold a drill to this neighbor will be cursed on a regular basis. Other neighbors are always extremely interested to know why exactly this neighbor needs to drill something so urgently on a weekend morning. The drilling neighbor has 2 modes: merciless and gentle. In the first case, he drills non-stop for hours, in the second one — he occasionally takes breaks, perhaps, in order to not disturb his neighbors too much. 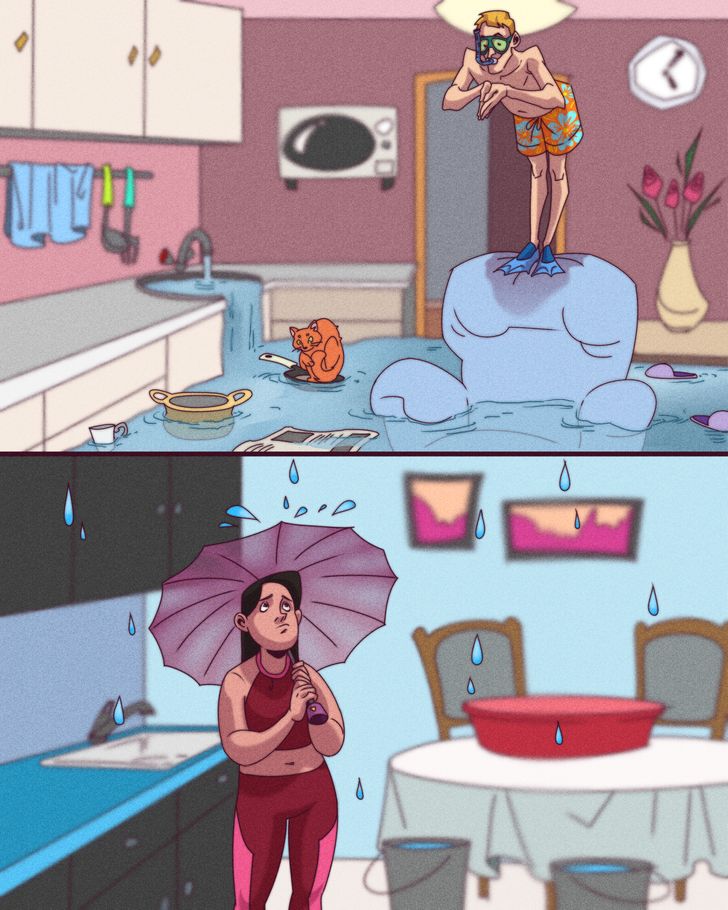 The neighbor whose sanitary engineering keeps breaking down constantly and, every time, this fact becomes an extremely unexpected thing for him. After all the apologies, he provides his neighbors from downstairs with another portion of water leaks. 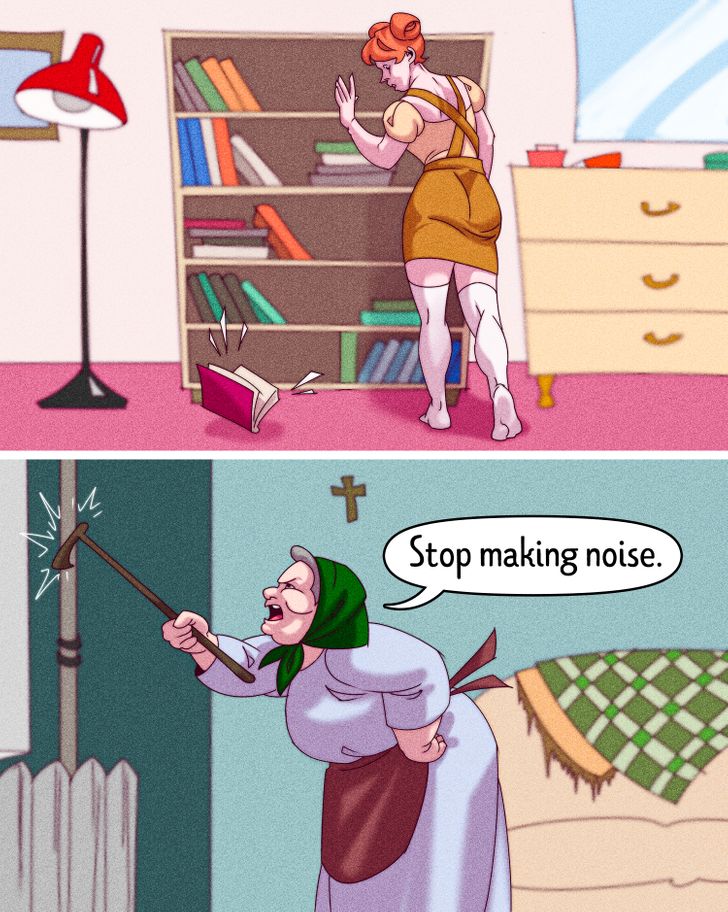 Everything is wrong for this type of neighbor — in their opinion, those in their surroundings laugh too loudly, they shuffle, and they slam their doors. Once you drop a piece of paper or turn on the TV quietly, they instantly start to hit the radiator to show their discontent.

13. “The participants of a reality show” 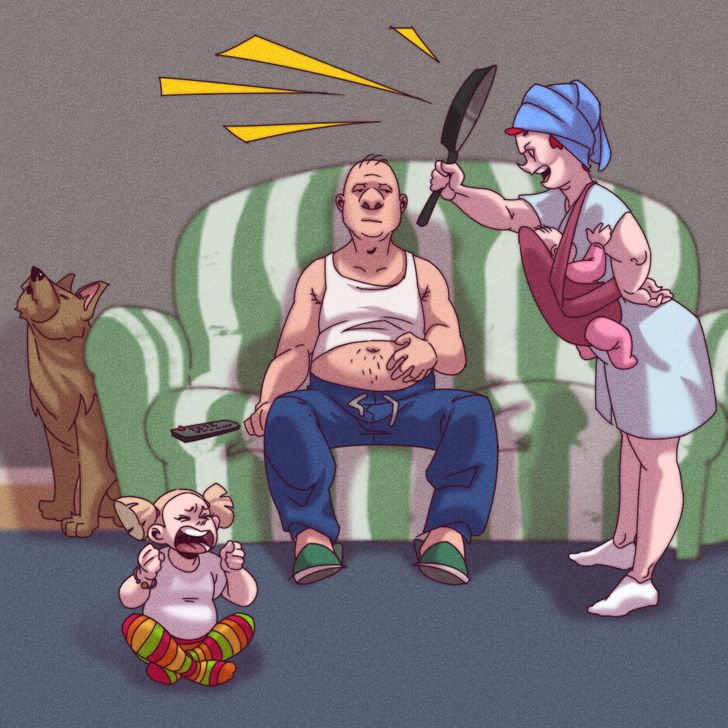 These people don’t feel shy about dealing with all of their issues out in public. The whole block is aware of their family drama. They fight loudly and reconcile in a loud manner too. At first, it’s irritating, but later you might start to follow their plot and even side with one of them.

Which of these neighbors lives next door to you?