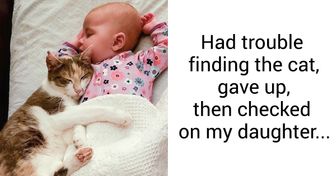 This mysterious and picturesque country located between India and China was closed for tourists until 1974. Today, everyone who’s ready to go through a lot of formalities and has enough money can visit Bhutan. Ans even though the borders are open, the King still tries to restrict the amount of tourists using many different methods.

Bright Side was curious to know why all the people who live in Bhutan are so happy, so we had to study their traditions and numerous bans.

14. No internet or television

In Bhutan, TV and the internet were officially banned until 1999. But it was impossible to isolate the whole country from modern technologies, so the King decided to cancel this rule. In this regard, Bhutan was the last country in the world that started using television.

13. The Ministry of Happiness 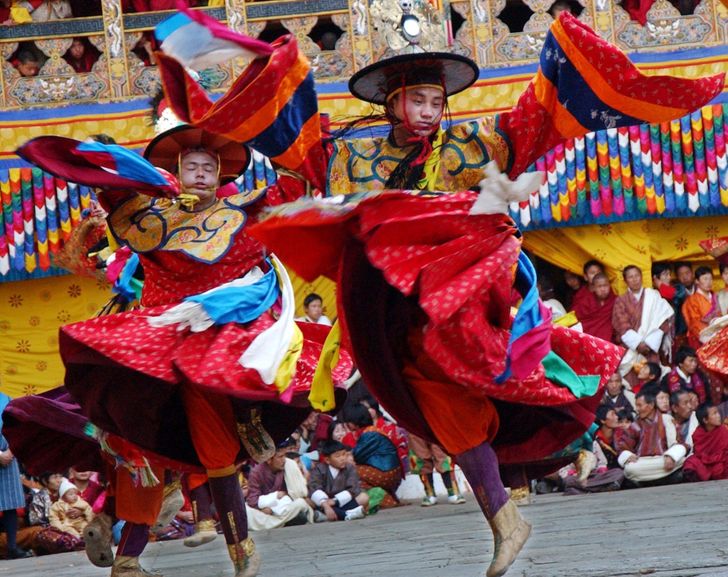 To take care of people’s inner peace, in 2008, the Gross National Happiness committee was formed. Even the population census questionnaire has a column where you can indicate whether you’re satisfied with your life or not.

What’s more, there’s also the Ministry of Happiness and, similar to the term Gross Domestic Product (GDP), they measure Gross National Happiness. Thus, the quality of life is determined by the balance between their financial and mental values.

12. There are no homeless people. 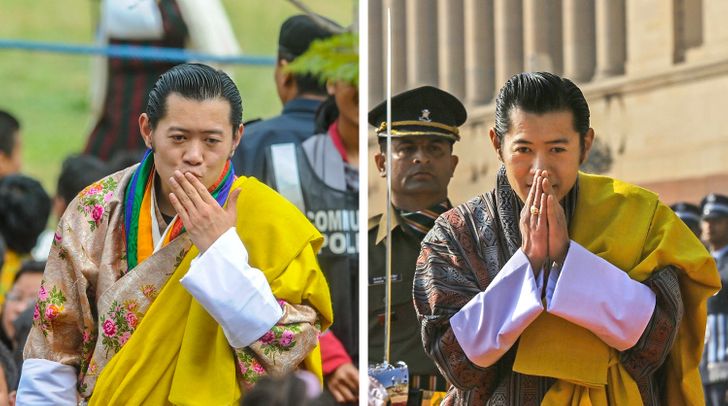 In Bhutan, there is no one who lives on the streets. If a person loses their home, they just need to go to the King, who will give them a piece of land where they can build a house and plant vegetables.

Now it’s pretty clear why Bhutanese people consider themselves to be happy.

Each Bhutanese resident has a right to get free medical care. Both traditional and classical medicine are common in Bhutan, and a person can decide on the method of treatment on their own.

The King of Bhutan enacted a law prohibiting the cultivation, harvest, and sale of tobacco in the country. It’s impossible to buy tobacco there. Tourists who manage to collect all the documents necessary for crossing the border have to pay a big fee if they want to bring cigarettes with them.

8. Caring about animals and nature

The country is really concerned about ecology and nature. They even pay special attention to growing trees. By the way, in 2015, Bhutan set a world record when people planted 50,000 trees in just one hour.

Most Bhutanese people are Buddhists. Since this religion teaches respect for the whole animal world, vegetarianism is really common there. The main and basic dish is rice. By the way, ordinary rice wouldn’t be able to grow at such altitudes, so people grow red rice, which is rather hard and has a peculiar taste.

People pay a lot of attention to drinking tea. They drink black and green tea with salt, pepper, and a spoonful of butter. 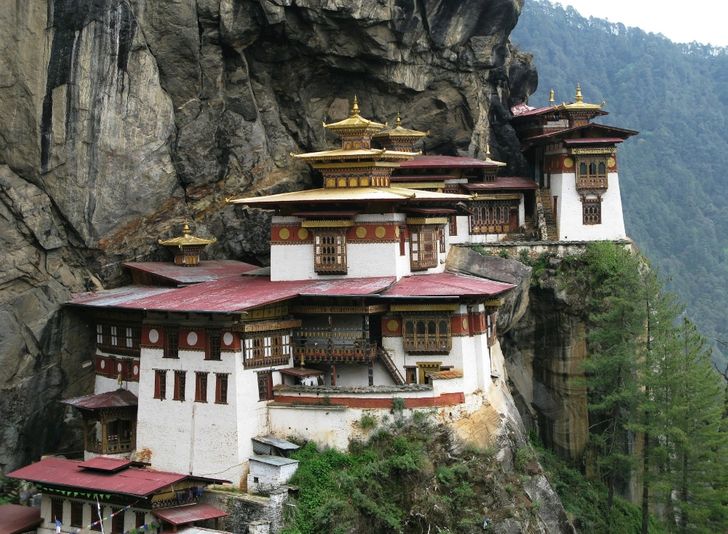 Though the King has opened the country of Bhutan to tourist visits, he doesn’t allow them access to the whole country. You can visit Bhutan only with a group of other tourists. All documents and visas are issued by one state-appointed company. To get a permit, you have to pay all expenses in advance (flight tickets, hotel, fees, tour operator and guide services, visa, and insurance).

In the country, you may only travel with a guide: you would never have a chance to go for a walk on your own. The tour operator offers different entertaining programs for all tourists. One day usually costs around $250.

There’s only one airline that operates all flights into and out of the country, and prices at the hotels (whether they are cheap or luxury) are set by the government.

5. The tradition of inheritance 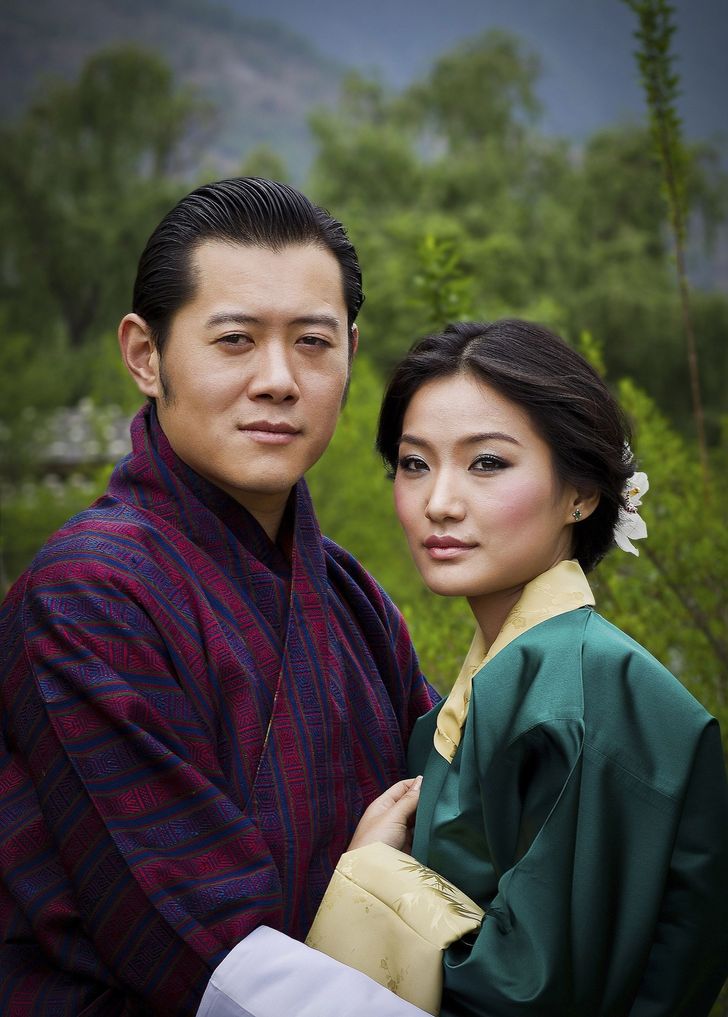 Women are respected and honored in Bhutan. And their tradition of inheriting proves that. All property and belongings like their homes, cattle, and land go to the eldest daughter, not son.

4. Ecology is the most important thing.

Today, the whole world is preoccupied with the label “bio.” Bhutan doesn’t concern itself with this problem: it’s against the law to import or use any chemical products there. So everything they use is cultivated inside the country and is totally natural.

In Bhutan, it’s prohibited to marry a foreigner. The King does everything he can to preserve their uniqueness and isolation from the rest of the world.

During a wedding ceremony, monks read mantras. It’s said that this process allows newlyweds to build a tight mental connection. There’s also a Changphoed ritual, which is the offering of locally grown brew to the deities. After the offering, the remaining brew is served and shared by the bride and groom.

Only after all the necessary rituals are performed, does a couple become a family. By the way, as a rule, a man comes to a woman’s home, and when he earns enough money, they can move to another house.

In the capital of Bhutan, there are no traffic lights at all, and it’s not a problem for people. All road signs are drawn by hand.

Bhutanese people like to decorate their houses. They draw birds, animals, and different patterns on the walls. We think these decorations look just magnificent.

A traditional house is a rather small building with 3 stories. The ground floor is a space to keep animals, the living space is located on the second floor, and the third floor is used to store hay.

Despite all the bans and strict rules, Bhutanese people are very friendly and happy. Tourists have also become more and more interested in this isolated country.