12 Exercises That Can Defeat Your Hunger in 5 Minutes

One of the biggest problems with a good workout is that it might make you feel hungry. And if you binge, you kind of miss the whole point of having an exercise routine. That said, there are a bunch of exercises that can help you fight hunger, keeping you satisfied as well as healthy.

Bright Side has discovered some exercises that can help you defeat hunger in 5 minutes (or less)!

This simple Chinese gymnastics exercise is said to help fight hunger, even if you haven’t eaten all day. Get a support, like a small table or chair. Lean your elbows against it. Alternatively, lean against the wall. Take a deep breath and at the same time pull the belly in as far as you can. Hold your breath for 3-4 seconds. Exhale and relax the abdominal muscles. Repeat 10 times. Doing this exercise before a meal is especially said to be helpful. The feeling of hunger will disappear immediately or after a couple of minutes.

2. Frog swaying on the wave

Clearly, frogs are experts at keeping your appetite in check. This is an exercise that requires you to lie on your back. Lift your legs up slightly, keeping them parallel to each other. Press one hand to your chest and the other to your stomach. Expand your chest by breathing. Perform this exercise before each meal and it can help you become satisfied with a small amount of food.

As an extension of the aforementioned Chinese exercises, there is also a move that can help you control your breathing and thinking. Fold your legs so that your knees stick out, much like a lotus flower’s petals, while keeping your back straight. Hold for 5 minutes and just focus on your breathing.

Practicing yoga can help you fight the urge to overeat by 51%, according to studies. Some simple poses, like downward facing dog, can do the trick and help you feel fuller throughout the day. In this exercise, you get on all fours and gradually fold your torso into an inverted V.

First, place yourself in the downward facing dog pose. Next, transition to lie on your stomach and gradually lift up your head, keeping your neck straight, imitating the snake. Hold this pose for 15 to 30 seconds before returning to downward facing dog.

Similar to cobra, start in the downward facing dog pose. Gradually, move your head forward, giving the impression that you are lifting yourself off the ground with your arms, before returning to downward facing dog. Some people also try a “side plank,” which requires them to hold themselves up with one arm. 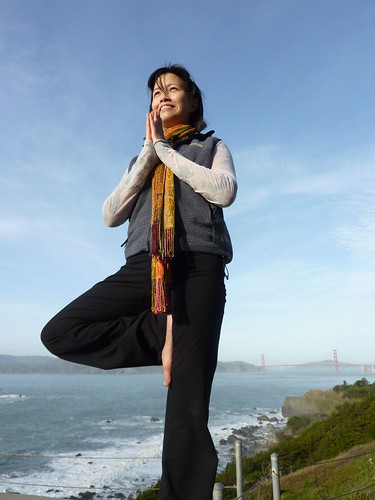 You can even help yourself while standing up! Stand up straight with your arms by your side. Raise one leg and place it against your corresponding inner thigh. Place your hands in prayer position and hold. Then switch the legs and do the same thing on the opposite side.

For this pose, sit on the ground with straightened legs, then bend them at your knee, and raise them into the air slightly. Reach out your hands straight beside your legs and hold this pose for a few seconds.

This time, lie on your back and relax for a little while. Lift your legs straight up and move them toward and eventually over your head, ultimately trying to touch the floor. Even if you can’t reach the floor, just move as far as you can and hold for a few seconds.

There are multiple warrior or “Virabhadrasana” poses, but there is one that’s believed to help fight hunger. First, stand up straight at the top of your yoga mat. Take a big step back with your left foot, place it at a 45º angle, and bend your right knee, keeping your left leg straight. Bring both hands out to the sides. Hold for a few seconds.

Some simple exercises, that even your kid sister can do, can help fight off hunger pains. According to one 2013 study, men who exercised by jumping rope had less urges to binge than men who tried cycling. It was believed that the added stress placed on muscles and bones helped fight hunger pains.

Similar to jumping rope, any exercise that places stress on your muscles and bones can help reduce hunger. It makes sense to cut out the middle man and use your muscles here and now. Lift weights or take a kickboxing class.

Intervals, or smaller exercises you perform during your “resting” time during a workout, can also help calm your appetite. For example, run at your top speed for about a minute, then jog at a lesser speed for around 4 minutes. According to one study, people were found to eat around 170 fewer calories within an hour after their workout than people who exercised moderately.

Do you know any simple exercises that can help you fight hunger? Let us know!

12
0
67
5
21k
© 2014–2020 TheSoul Publishing. All rights reserved. All materials on this site are copyrighted and may not be used unless authorized by the Bright Side.