© 2014–2023 TheSoul Publishing.
All rights reserved. All materials on this site are copyrighted and may not be used unless authorized by the Bright Side.
20-201

9 Novelties in Movies We Didn’t Find Out Until Today 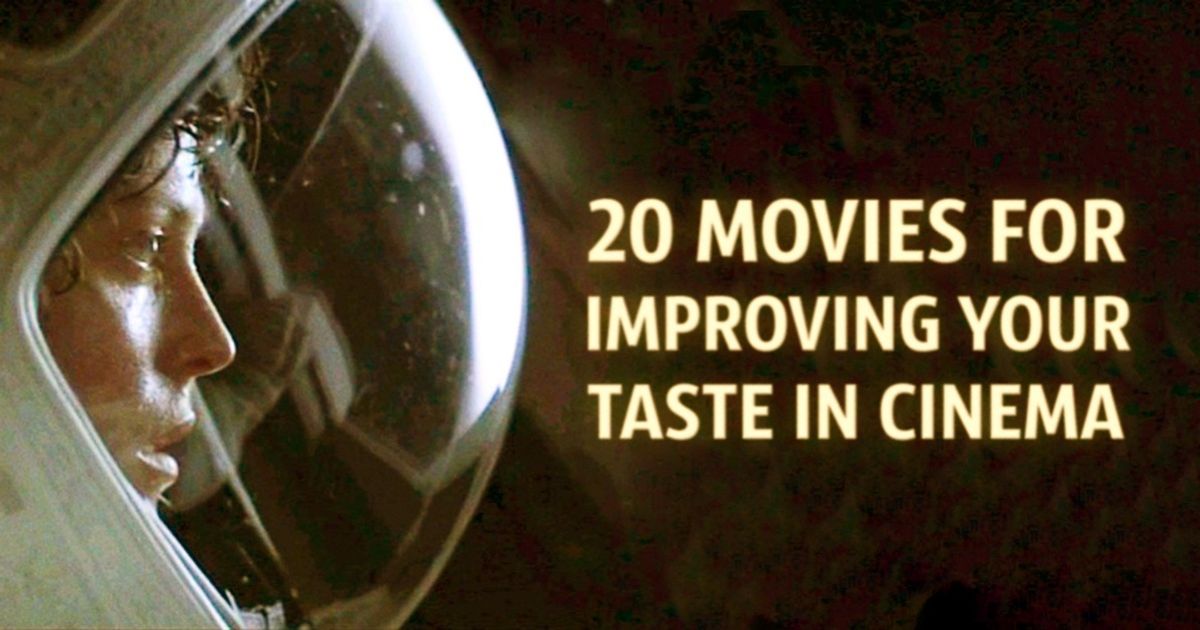 20 masterpieces of cinematography for the aspiring film buff

If you want to be able to confidently tell good films from bad ones, and find your way in the world of cinematography, you need criteria for assessing quality. Only the very best films can help you do this. With this in mind, Brightside.me has drawn up a list of pictures which many experts believe to make up the minimum base of knowledge an educated person should have about cinema.

This list does not only include classics of the silver screen, but also modern works which are examples of excellent acting and producing skill.

One Flew Over the Cuckoo’s Nest

Having pretended to be insane in an attempt to escape imprisonment, Randle Patrick McMurphy is sent to a psychiatric clinic, where the cold hearted nurse Mildred Ratched holds sway with rigid discipline and petty meanness. McMurphy is troubled by his fellow inmates docile acceptance of this state of affairs, and he decides to rebel. Alone.

No one may disrupt the changing of the seasons. Their coming and going energizes the soul, leading to expressions of spirituality, as well as to tragedy. They also symbolize the circle of life, desire, suffering and passion which we are all enslaved to.

In the roaring twenties, when America amused itself to the soundtrack of jazz and every hobo dreamt of becoming a millionaire, a handful of desperate young men meet in the slums of New York. They wipe out their competitors, ruthlessly punish traitors and brazenly carry out cunning scams, allowing them to become kings of the criminal underworld of the prohibition era.

This film is about a lawyer from Alabama who brings up his children alone. As well as covering the theme of racial prejudice, this is the story of how two children take their first steps in the world and develop understandings of gratitude, sympathy, fairness and inequality.

This picture tells the tale of the legendary hero of the First World War, the British spy T.E. Lawrence, who lives with Arab tribesmen and leads them to rebellion against the Turks.

Luke has tested his luck to breaking point many times, most recently in prison, where it seems he relishes confrontation with authority. Three escapes, there arrests and three harsh punishments haven’t broken his will. He has become a hero for the other prisoners, a lone hero who is making a stand against the system...

Private detective Sam Spade begins a deadly hunt for a priceless statue which has mysteriously disappeared. Will he find the Golden Falcon?

Singin’ in the Rain

The core of this legendary film is a dozen old songs written for various Broadway shows. Don Lockwood, a star of the silent movies, reminisces about his rise to fame. Suddenly fortune leaves him, as the era of the talkies begins.

Heart of a Dog

Professor Preobrazhensky undertakes a daring experiment, attempting to transform Sharik the dog into a human being with powers of reason equal to his own. The result is a certain Mr Sharikov. Unfortunately, the experiment shows us that it’s better for a dog to stay a dog.

Will Hunting is a 20-year-old former child prodigy who is always getting himself into trouble. When he is arrested for involvement in yet another brawl, a mathematics professor takes him under his wing.

It Happened One Night

Ellie, the heiress to a multi-million dollar fortune, plans to marry ’King’ Westly, a pilot. Her father is against the marriage and keeps her at home under lock and key. She manages to run away and sets off by bus to meet her intended in New York. On the bus she meets Peter, a reporter who has just been fired and is desperately seeking a sensational scoop to save his career. The daring young heiress, who is wanted by the police across the country, is Peter’s lucky break.

Welcome to the Los Angeles of the 1950s, with its bright sun, wide inviting beaches and flourishing organized crime. After the arrest of a mafia boss, one by one, his helpers are dispatched to the next world, as they all struggle to replace him as overlord of the criminal underworld.

American expatriate Rick Blaine owns a gambling den in Casablanca, Morocco. One day, quite by chance, into his bar walks Ilsa, an old flame he hasn’t seen for years.

This is the story of William Munny, a former bandit and hardened murderer who has managed to put his bloodthirsty past behind him. Now he’s a farmer with a wife and kids. But things don’t quite turn out as he had hoped...

A ragged little tramp meets a beautiful blind girl who is selling flowers on the street. She mistakes him for a rich duke. On finding out that an operation can restore her sight, the tramp begins a search for the money.

The Good, the Bad and the Ugly

At the height of the civil war a mysterious gunman roams the wide expanses of the Wild West. He has no home, no friends and no companions until he meets two strangers who are just as ruthless and cynical as he is. They are forced to join forces to search for gold. These out and out bandits find, however, that they are entirely unsuited to working together.

George Bailey, owner of a savings and loan association, is honest and charitable, a loving husband and father. He is overcome by misfortune and contemplates suicide. An angel is sent from heaven to save him. To convince George that life is worth living, the angel shows him the wonders of the world he lives in.

The Taming of the Scoundrel

A rough farmer who is completely unsuitable for female company is quite content with his life as a bachelor. Unexpectedly, a beautiful young lady appears in his life who tries to change him for the better.

A comic fantasy about the life, loves and death of the famous Baron Münchhausen, who lived in the eighteenth century and became the hero of many books and tales. This film is based on the novel of Rudolf Raspe, although much here is original.

In the distant future, the crew of a space freighter which is returning to Earth receive an unrecognized signal from an unknown planet. The crew decide to land and find out what has happened. The astronauts find the surface of the planet littered with unidentifiable objects resembling gigantic cocoons...