When Gene Hackman and Dustin Hoffman shared a bedroom in New York they never could imagine that they would receive Oscars one day. Something similar happened with Ben Affleck and Matt Damon when they moved into an apartment in Los Angeles together — little did they know, they had a very promising future ahead of them.

Here at Bright Side, we’re recalling great friendships that were born by sharing a bathroom when most of these famous people were just “aspirants.” 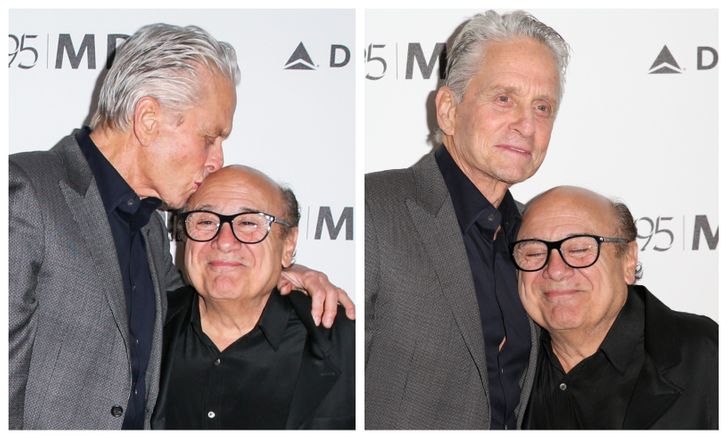 One of the most endearing relationships in Hollywood is that of Douglas and DeVito. It started back in the 1960s when they were just dreaming about making it big. They met at acting school in ’66 and were roommates in ’68. It was a time when they were “hippies” doing “crazy stuff.” They got to work together in several films and their friendship has continued to grow over the years. 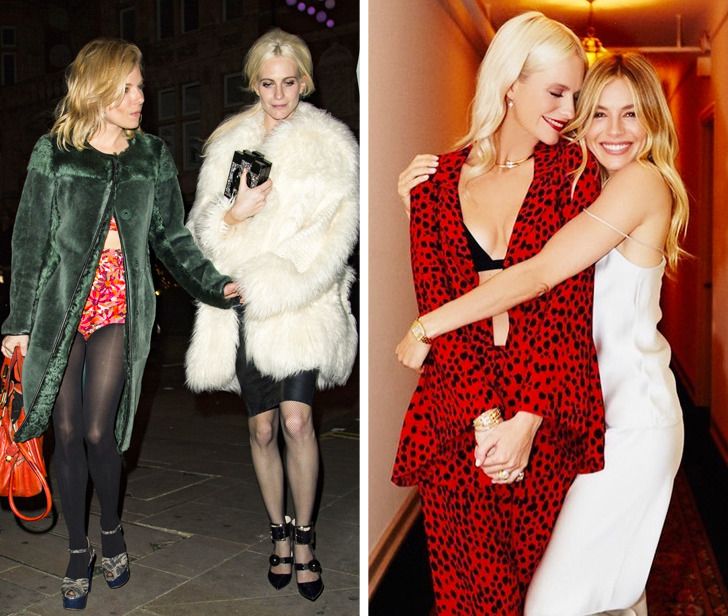 Sienna Miller and Poppy Delevingne shared a flat in New York years ago and still remain very close friends. Miller always appreciated that Delevingne didn’t take herself too seriously. And Delevingne considers Miller “a sister from another mister.” These women share a long-lasting, sincere friendship and always make time to catch up with each other. 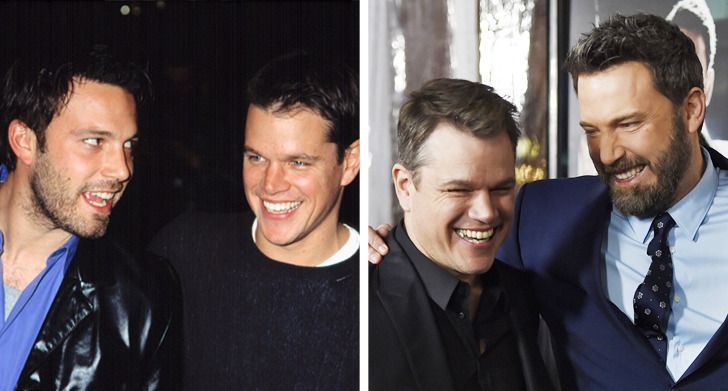 Ben Affleck was 8 years old when he met Matt Damon who was 10 at the time. It was the start of one of the best Hollywood friendships where the pair would pursue their acting careers together. They traveled to New York together for acting auditions and saved money for train and airline tickets in a joint bank account.

Success came to both of them thanks to their film, Good Will Hunting. Damon moved into Affleck’s Los Angeles apartment and they began working on the script during improvisation sessions. They eventually won both a Golden Globe Award and an Academy Award for Best Original Screenplay. Affleck has described this period of his life as “dreamlike.” 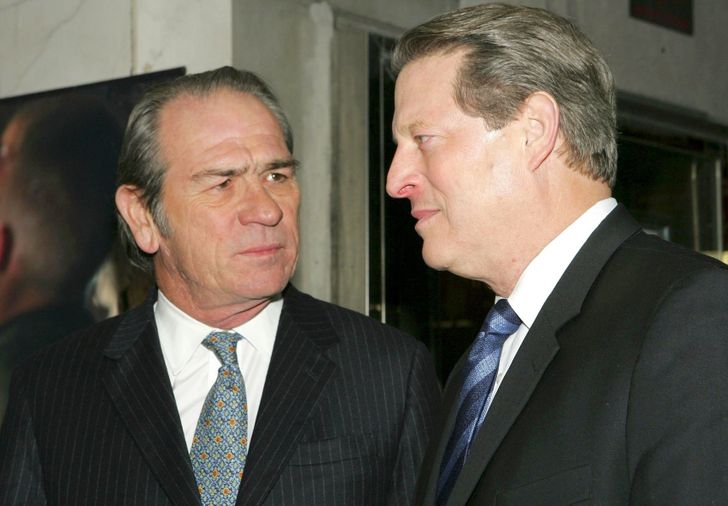 The great actor and future vice president crossed paths as roommates at Harvard University. It turned out that chance led them to share a room during their demanding studies in the Dunster House. Although their professional careers would lead them on very different paths, what they shared together in college is truly unshakable. 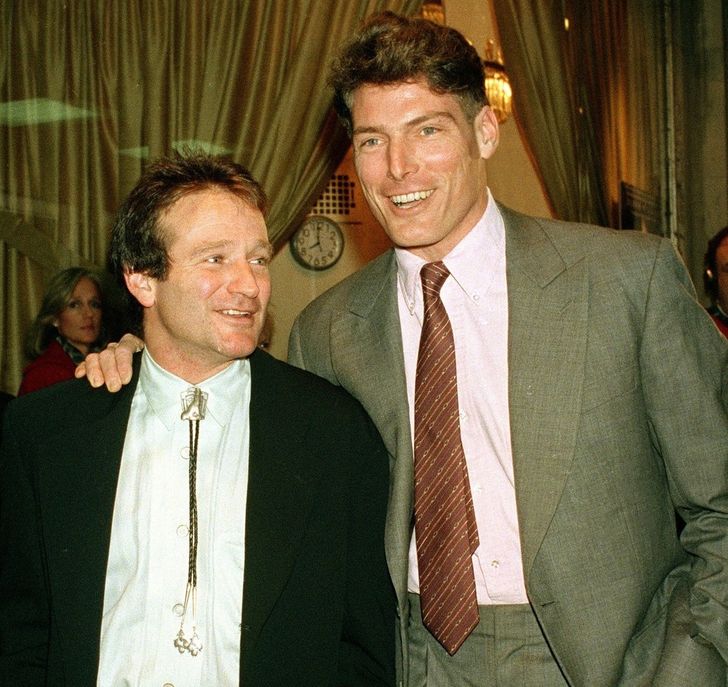 Their coexistence lasted only a year while studying at Juilliard School. Nevertheless, their friendship stayed strong until the end of their days. As proof of this, Reeve is the godfather of Williams’ oldest son, Zachary.

In his 1999 autobiography, Still Me, Reeve wrote that a few days after being thrown from his horse, Williams arrived in his room, dressed as a doctor. It was the first time since the accident that Reeve laughed. Is there any better way to show what friends can do for us? 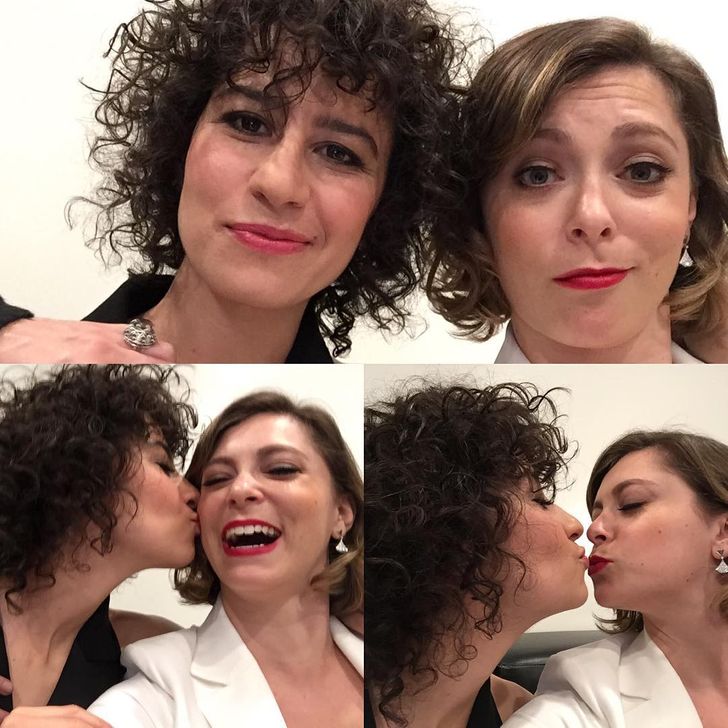 Bloom and Glazer roomed together after college in New York. For more than a year, they shared experiences of the beginnings of their careers on the sofa of their apartment in Brooklyn. As Rachel Bloom reminded us in a kissy post on Instagram, both besties managed to fulfill their dreams and now both have their own TV shows. 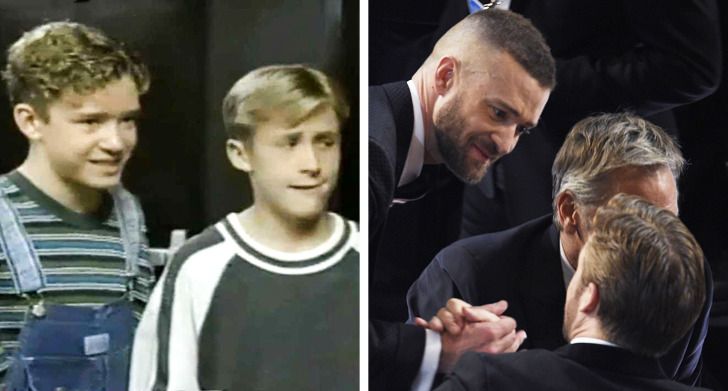 Ryan Gosling and Justin Timberlake began their careers at a tender age. They starred on the ‘90s show, The Mickey Mouse Club, and from that point on, their friendship on and off-screen started to grow. Gosling’s family lived in Canada and the only way the little boy could make his dreams come true would be to live at Timberlake’s house. And believe it or not, Timberlake’s mother let him move in and even agreed to tutor Gosling during the filming of the show.

As Timberlake explained, they were probably a little closer than the rest of the kids that were on the show just because they had to share a bathroom. That really creates a special bond, doesn’t it? 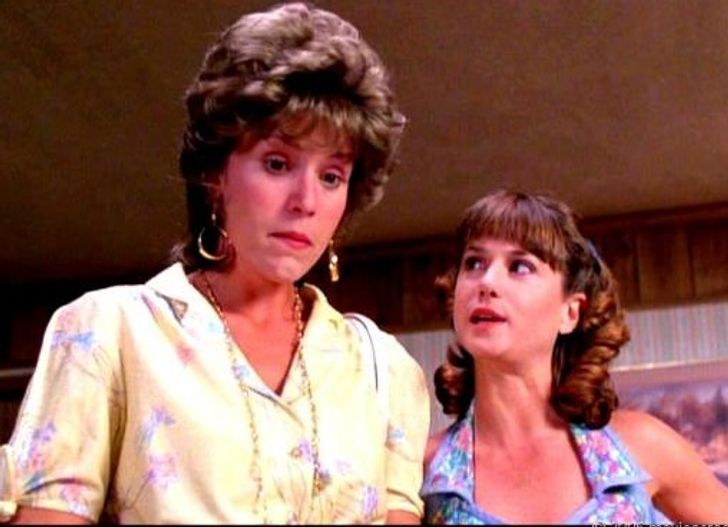 They met through their boyfriends when they were in their twenties. When they split up with their partners they decided to move forward to the next chapter of their lives together by moving into a joint apartment. They ended up sharing that place for a couple of years until Frances moved in with her future husband.

They keep fond memories of those single times when they were searching for their first roles. A few years later, the actresses worked alongside each other in Raising Arizona. 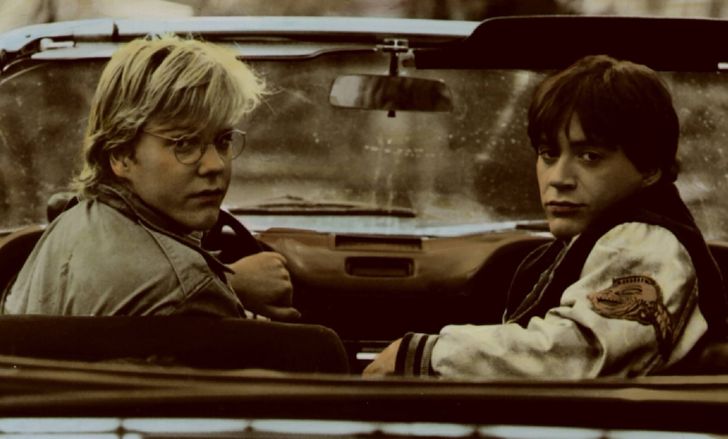 This pair was roommates for 3 years when they decided to try their luck in the Hollywood universe. Time and experience forced them to get to know each other well and create a bond that would last forever.

Sutherland described Downey as a “disciplined guy” and recalled that their friendship meant lending the other a shoulder to cry on in bad times, like when Downey suffered heartbreak after his split with Sara Jessica Parker back in 1991. 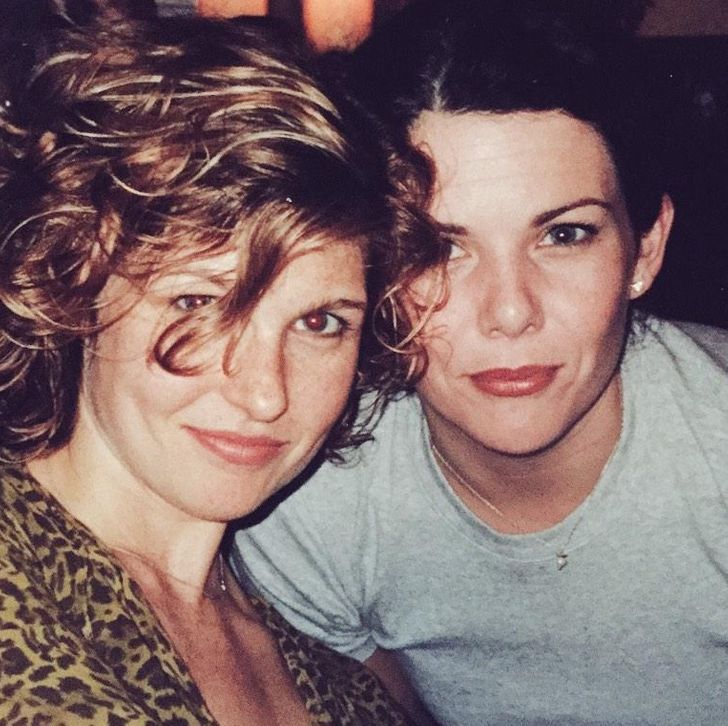 Both were in the same acting class in New York City and became fast friends. They both decided to give the big move to Los Angeles a shot. In their apartment, they shared a time in their lives when everything seemed possible — they were just trying to chase their dreams.

Graham admitted that they had no furniture and all they ate were Rice Krispies Treats. This was just a small detail of their past compared to their great party memories together.

Both these talented men shared a $900-a-month apartment in the valley when they struggled as comedians, long before they took over Hollywood making us laugh. Eventually, Apatow became a director and producer; and Sandler, an actor.

The memories they share from this time in their youth when they toured clubs doing their comedy shows have served as inspiration for the film, Funny People, which they both worked on. Those were the times when they considered eating at Red Lobster once every month a big night out, and Sandler would make prank phone calls to friends while Apatow filmed it all. 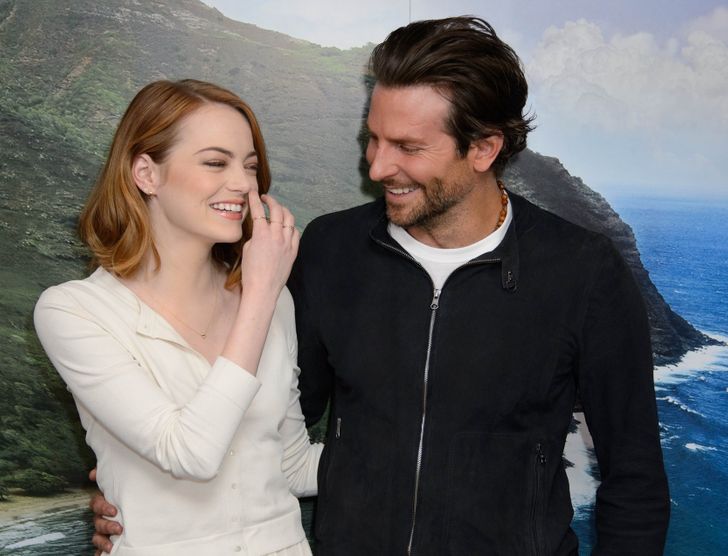 They were roommates in Hawai while filming the movie, Aloha which resulted in them developing a special bond. As Cooper explained, they got to know each other very well. Meanwhile, for Stone, there were only 2 options: “You’re forced to get to know them or hate them.” But judging by the photographs from behind the scenes of the film, it’s safe to say they understood each other. 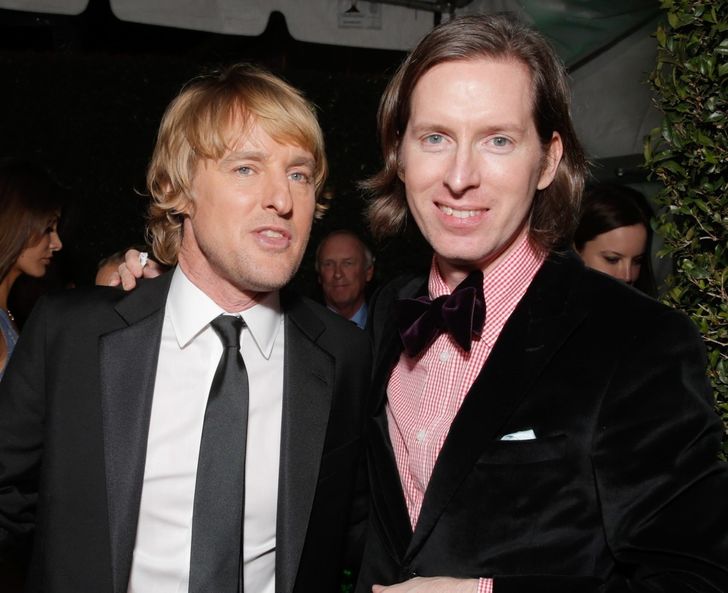 Another example of a productive, long-lasting friendship is that of Wilson and Anderson. They went to the University of Texas together, sharing a room and a friendship for years. They took advantage of that time together by co-writing the 1996 film, Bottle Rocket. But the path was not easy and after the film failed to achieve success, Owen Wilson even considered joining the Marines.

Luckily, the 2 kept going and Wilson found himself under the command of his friend and ex-roommate in films such as The Royal Tenenbaums and The Darjeeling Limited. 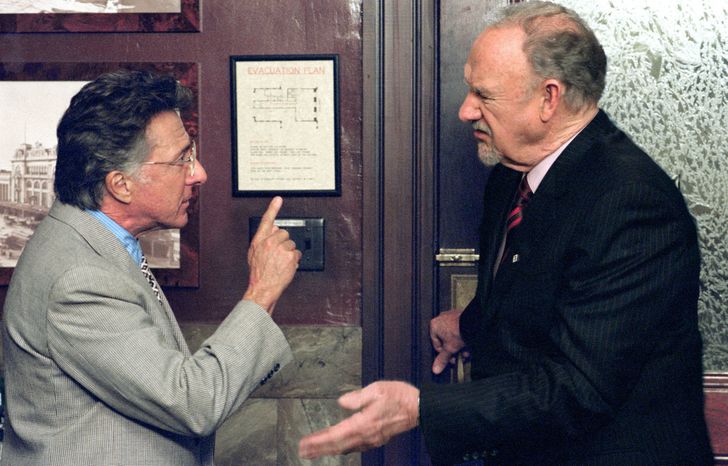 Their friendship began more than 5 decades ago when they met while taking acting classes and bunked up in a 1-bedroom apartment in New York. Both tried to get their acting career off the ground while doing a range of odd jobs. Hoffman confessed that in those years, he worked in a psychiatric hospital, as a sales assistant in Macy’s toy department, and as a weaver of Hawaiian garlands.

Do you know any other actors who have great friendships after living together? In your experience, have you continued to maintain a close relationship with your old roomies?