20 Weird (or Amazing) Things That Are Totally Normal in Japan

The norm in Japan can be a surprise everywhere else. For example, all elementary school students in Japan are expected to use randoseru, firm-sided backpacks that usually cost at least around $300 each for about 6 years. Essentially, these expensive backpacks are not meant for those who could buy them with their own money.

Bright Side delves into the Japanese culture to see how some things that are seen as common knowledge to the Japanese, might come as a surprise to those who were not raised in Japan.

1. Drainage canals in Japan are so clean, some even have koi fish in them.

It is a well-known fact that Japan is a very clean country. But koi fish living in the drainage canals puts the Japanese cleanliness level so far up the charts. Not only do koi require clean water to live in, they can cost a bomb, so the fact that Japan believes that the water can be kept clean and the fish are unlikely to be snagged away is simply mind-blowing.

2. “Will you wash my underwear?” is a marriage proposal.

To some of us, this might come off as insulting, but to the Japanese, this means that the man trusts the woman enough to wash one of his most private possessions. It is a humbling way to invite someone to see even the not so pretty part of a person and welcome them to help fix it.

3. A small face is considered beautiful.

It might be confusing in Western culture if you were told that you have a small face. On a Japanese show, where Madonna made an appearance, the host commented to her that her face was small and she had a look of confusion before replying, “But I have a big heart!” This hinted that she might have thought he was saying something unfavorable, when he was actually praising her for her beauty.

4. Some people require more clothing during the summer. 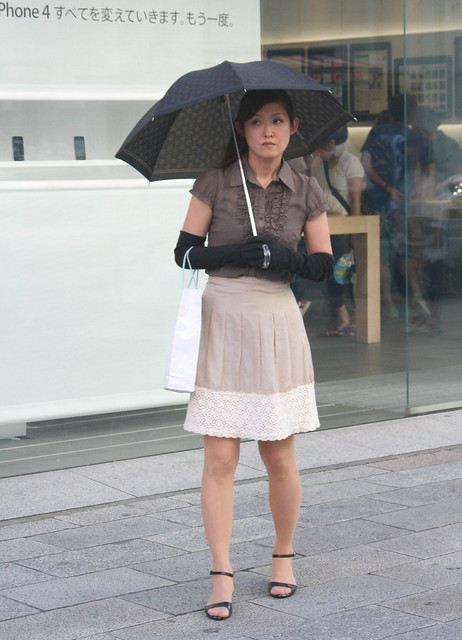 Summer in Japan can be very hot, especially in Osaka and Kyoto, but that does not deter some Japanese ladies from donning more clothing to protect their skin from the sun’s rays. In most other countries, when summer comes, it’s time for breezy summer dresses, but Japanese ladies prefer not to risk skin cancer or getting a tan.

5. Sunglasses are typically only worn by celebrities.

Even when sunlight gets into their eyes, the Japanese would prefer to use an umbrella than to wear sunglasses. This fashionable item is seen as something that only very stylish people, celebrities, and foreigners wear.

6. When eating ramen or soba, the noodles should be slurped.

Even though the Japanese are generally a quiet culture, they believe in slurping while eating noodles. The justification is that slurping cools off hot noodles as they come into full direct contact with your tongue. This way, you can enjoy them while the rest of the bowl stays piping hot. Some also believe that slurping is a better way to savor the aroma of the soba.

7. The pinky finger and the red thread

Just like in the Chinese and Korean culture, the Japanese believe that the gods tie an invisible red cord around the fingers of those that are destined for each other. The thread may stretch or tangle, but it never breaks. As for the pinky, if a Japanese person asks, “Is she your...” and gestures with their pinky, it signifies “girlfriend,” “mistress,” or “wife.” Unless you’re talking to a member of the Yakuza, the Japanese mafia, in which case it means that the mistress, girlfriend, or wife has been decapitated.

8. “Would you make miso soup for me every day?” is also a marriage proposal.

You might think, “Is he looking for an in-house cook?” but this is an indirect way of proposing. The Japanese drink miso soup every day, but each house has their own preference on how they like their miso soup. This proposal means that the person is being trusted with one of the most important parts of a Japanese person’s everyday meal.

In other countries, lawyers might only have business cards to show that they are qualified, but in countries like Japan and Korea, lawyers have special badges that they wear on the lapel of their blazers. The sunflower badge is initially shiny gold but wear and tear would reveal the silver badge underneath, as can be seen on badges of veteran lawyers, unless these lawyers paid extra for real gold badges.

10. There are hardly any trash cans, but it’s so clean there.

Tourists may be baffled by the fact that there are not many trash cans around for such a clean country. Trash cans are generally available near vending machines. Some trash cans outside of stores can only be used by the store. The Japanese have a habit of cleaning up after themselves and usually hold on to their trash until they get home where they can throw the trash away properly.

11. Girls and boys almost always have bangs and brown hair.

Bangs or mae-gami is often seen adorning young Japanese faces. Perhaps this is due to their culture of favoring cuteness and viewing small faces as beautiful. Although most Japanese were born with natural black hair, young people tend to dye their hair brown, a trend they call chapatsu which literally means “tea hair.”

12. Raw egg is pretty common in a Japanese meal.

People always ask, do the Japanese really eat raw eggs? The answer is yes. Raw eggs and lightly cooked eggs are usually eaten with rice, meat, or soup-based noodles. The easiest meal is where a raw egg is mixed with rice, soy sauce, and seaweed or furikake (a dried Japanese seasoning) is seen as a bachelor’s food because of how easy it is to make and eat alone.

13. A long-sleeved kimono is only for unmarried young women.

Furisode or long-sleeved kimono is only worn by unmarried young women. It is commonly rented or bought by parents for their daughters to wear when celebrating Coming of Age Day, the year they turn 20, the legal age in Japan. On top of the huge belt holding the kimono, some wear an attractive cloth that peeks out of the belt. It is improper for married women to have this cloth showing because it is akin to a desire to attract other men.

14. They soak in a bath after rinsing first. 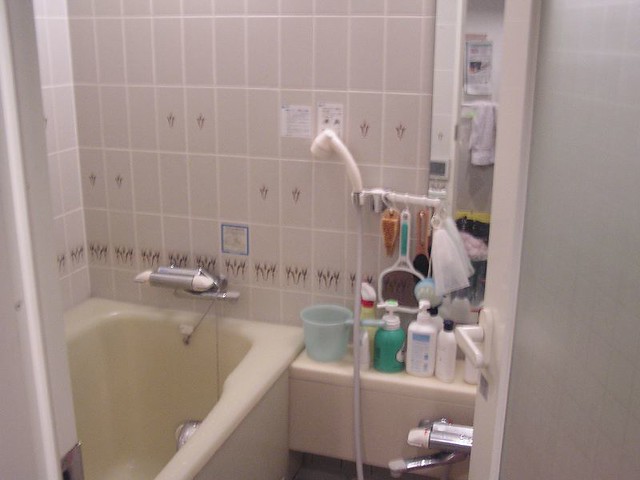 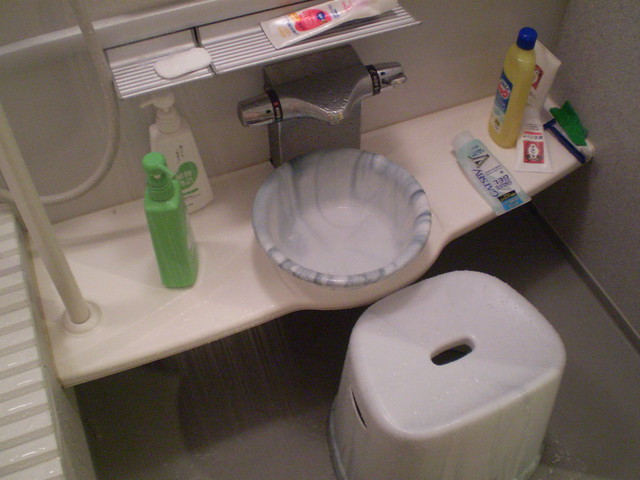 Taking a soak in the bath in an ordinary life of a Japanese person is really just that — there should not be bath bombs or bubble soap used. The Japanese would always rinse their body outside the bath tub in the shower or a washbowl before entering the bath. After soaking, they would soap their body outside the tub and rinse before the second soak. The bath would have been prepared beforehand to ensure the right temperature and is usually shared among family members.

15. Blush should be more pronounced than eye shadow and lipstick in Japanese makeup.

Japanese women tend to go for more soft-colored lips instead of strong or dark-colored hues. However, they like to amp up their blush because it gives them a look of vitality, as if they’ve just exercised and look fresh, but without the sweat.

16. Christmas is like Valentine’s Day and it’s a tradition to eat at KFC.

People in most other countries celebrate Christmas with their family, but to the Japanese this is another event like Valentine’s Day. There was a time when hotels were fully booked on Christmas Eve because couples would spend the night together. Another Christmas tradition is eating Kentucky Fried Chicken, because KFC Japan has promoted their fried chicken as a Christmas meal since December of 1974.

17. They visit shrines, churches, and temples on different occasions.

Throughout the typical life of a Japanese person, they go to 3 different religious places for different occasions. To celebrate Shichi-Go-San, a festival for 3-, 5- and 7-year-old kids, the Japanese would visit a shrine. Weddings are typically done in churches, sometimes in faux churches that were built for the sole purpose of holding wedding ceremonies. Funerals are often held in temples.

18. Blood type is used instead of horoscope.

While in other countries people would only ask for your blood type for medical purposes, in Japan, blood type is more popularly used to gauge a person’s personality traits than horoscopes. Blood type A, which represents most of the Japanese population is said to be well-organized and shy. Blood type O is optimistic and ambitious. The rare blood type AB is eccentric. Blood type B has been branded as selfish, and might not be very favorable in a Japanese person’s eyes.

19. Hot towels at restaurants should be used before eating.

In high-class Japanese restaurants, the hot towel or oshibori is provided for their customers. In cheaper restaurants, they usually come in plastic. Unlike napkins, which are used to wipe the mouth after eating, they are meant to be used before eating to clean your hands. Cleaning your face or neck with them is considered poor manners.

The word for yes is hai and for no is iie. But the Japanese also often use “ii desu” or “kekkou desu” which can mean either yes or no. How do you know which one is it? You have to pay attention to the context and the way it is being said. The intonation and/or gesture will dictate what the speaker means.

Which points above make you feel like living in Japan and adapting to their culture? Are you aware of any other interesting things about the Japanese culture?

14
3
30
7
17k
© 2014–2020 TheSoul Publishing. All rights reserved. All materials on this site are copyrighted and may not be used unless authorized by the Bright Side.