© 2014–2023 TheSoul Publishing.
All rights reserved. All materials on this site are copyrighted and may not be used unless authorized by the Bright Side.
7-5-

John Travolta Pays Tribute to Kirstie Alley, “I Know We Will See Each Other Again”

As Jamie Lee Curtis Gracefully Turns 64, Here Are 5 Reasons Why She’s So Radiant While Being 100% Natural

15+ People Whose Pain We Feel Even Through Photos

As Brad Pitt Turns 59, Here Are 7 Little-Known Truths That Made Us Look at Him in a Completely Different Light

10 Tips From Julia Roberts to Keep Our Youthful Looks 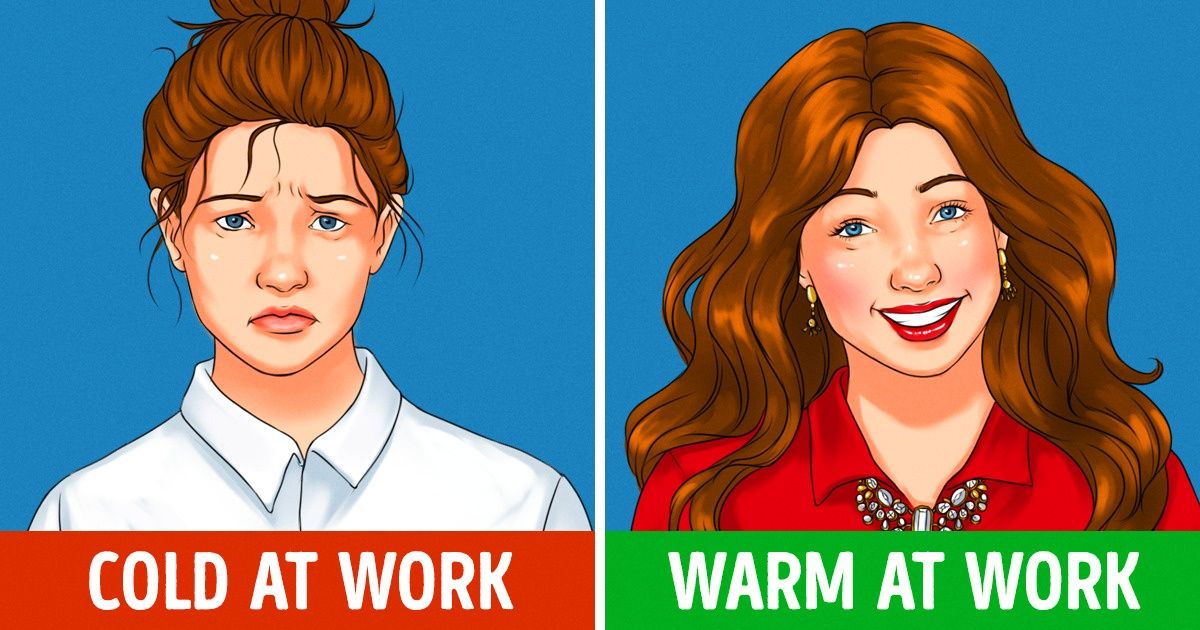 Women Are Less Productive at Work If They’re Constantly Freezing at Their Desks, a Study Suggests

As an office worker, you might’ve noticed that women often tend to cozy up in cardigans or even blankets because it gets pretty chilly for them. That’s because the office temperature formula was designed for men and it’s far from the ideal conditions for women. Moreover, a new study found that female productivity gets worse in lower temperatures, while men are not as affected by the change.

We at Bright Side know the struggle all too well and want to get to the bottom of this endless thermostat war.

Women might perform worse when it’s colder, but it’s the opposite for men.

Research published in the journal PLOS One tested the idea in question on 543 subjects. The study participants were given the same tasks, which included math and verbal tests, for different “sessions” where the temperature varied from around 61°F to 90°F. The findings confirmed their suspicions: women perform better at higher temperatures, while male productivity is at its best in colder environments.

Even 1-2 degrees can make a difference.

So, what’s the ideal temperature for men and women? It’s actually not drastically different. According to a 2015 study, men are comfortable at a temperature of 72°F, while women prefer 77°F. But since most workplaces are male-oriented, women have to constantly warm themselves up by any means possible. One 2006 study claimed that the ideal temperature in the workplace is 71.6°F.

It’s all about our anatomy.

Now the question is, why exactly do men and women have different preferences when it comes to office temperature? The answer lies in our bodies’ perception of cold. A female body produces a hormone that makes women react to cold faster than men. Basically, once the temperature goes down, female bodies start preserving heat, leaving our fingers and toes cold, which makes us feel it quicker than men.

The solution is actually simple.

One interesting discovery in our main study is that female productivity increases much faster in warmer environments than male productivity decreases, so there is a point where the gender temperature gap in performance ceases to exist. Simply put, women and men will perform worse as a whole group in lower temperatures than higher.

The researchers themselves recommend turning thermostats higher for mixed-gender workplaces. So now is the time to put an end to the thermostat battles and turn the temperature up by a couple of degrees.

Do you personally notice any difference in your productivity depending on the office temperature? Share your experience with us in the comment section.

Please note: This article was updated in July 2022 to correct source material and factual inaccuracies.
6-5-
Bright Side/Curiosities/Women Are Less Productive at Work If They’re Constantly Freezing at Their Desks, a Study Suggests
Share This Article
You may like these articles