Bright Side Careers
Want to work at Bright Side?
Check out our open roles.
Explore roles
© 2014–2023 TheSoul Publishing.
All rights reserved. All materials on this site are copyrighted and may not be used unless authorized by the Bright Side.

Read the article
Get notifications
Siska YS
3 years ago
All the numbers have different colors except 2 and 6
-
-
Reply
Mary Ann Bittle
3 years ago
#2 is making an assumption, that the house with #19 is actually on the left side, and that the house next to it in front of Alice would actually be a larger number. It also makes the assumption that the house is on the left side of the viewer, when it could be on the right side of the viewer. Therefore, more information really needs to be available before you can choose which direction the numbers are going according to the picture. The choice for where the girl Alice is going is a good one, however.
#3 I don't agree. I believe it would be more logical for the girl with the leggings to be the cat owner, as she would KNOW not to wear stockings around a cat. I KNOW cats, LOL - I have cats, and I woud never deliberately play with any of my furrballs while in stocking hose! The girl that has the run in the front likely got it from the cat, yes, but only because she didn't know any better than to play with cats when you have hose on.
For #5, you've got it ALL wrong. I actually took an image to prove it, The old lady on the right in the picture has the watering can that will hold more water, simply because the spout of her can is higher from the bottom of the can than the spout of the other old lady's can. Look at the image below. Proof positive, right there.
On image #7, for mistake #13, one of the "mistakes" you list is: "the cart with hay in the background is much higher than the woman." This isn't a mistake, it simply means the cart isn't very heavy (hay doesn't weigh that much when not baled), so it doesn't need to be tiny for her to move it. After all, women who are active like a farmer would certainly be able to move something much heavier than a woman who, for example, does paperwork all day long.
For #8, you could also assume that the fish have survived, as they are definitely eating something, and someone is definitely fishing, so they likely have already learned the fish are still there. Otherwise, one would assume they would have already learned there were no fish left, so they wouldn't be bothering with fishing. They have been there at least long enough to have discovered that, one way or another.

On #9, you claim the father "looks like a hipster," when no, he really doesn't. Besides, that type of person would not, by any means, be the only kind that might be a DJ. On top of that, the electric organ in the room would not be something a DJ would need, so likely he is a member of a band, and what you consider "DJ equipment" is simply part of what the band uses to make their music ("scratching records," etc.), along with the organ. As well, you made a sexist mistake, stating "they don’t look like a boy’s toys." You don't know that, at all. Now, you MIGHT guess that the toys are a little on the young side for them to be the visible boy's toys. But then, you could also guess that the stuffed animals belong to the child who rides in the baby carriage, as well. Therefore, you could only state that there are at LEAST two children that live there (or stay there regularly), and *potentially* another one.

Wow, that's not too good a job you did with these, is it?
Oh, and as for the final series of numbers, 3 of them aren't matched with other colors, while the other 6 are each in pairs, with 2 of each number in the same color. You could easily call that a mistake. You could say 4 is the only one that's yellow, and the others are all shades of either red or green. Or you could simply point out that normally, this particular question always has either one or another word duplicated in the question itself, as in "can you spot the the mistake here?" or "can you spot spot the mistake here?" or "can you see the the mistake here?" and yours doesn't have any of those errors that the other, nearly duplicate questions have. THAT seems to be the real mistake on this last one. I am sharing a pic to show you what your puzzle should have looked like, combined with the proof from #5. 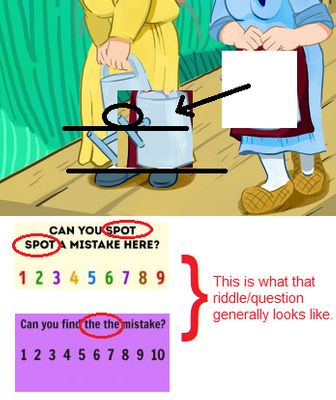