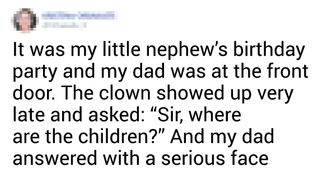 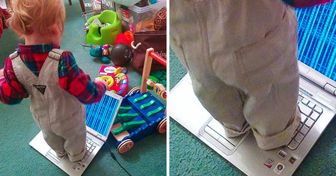 Men and women... we might speak the same language, but that doesn’t mean we understand each other. A study found that words and phrases can have different meanings to each of us when we’re talking. This is why, sometimes, we can’t communicate without getting into an argument, raising our voice, or throwing some pillows (sorry, guys). But if you’re willing to put in some mental effort, you can learn how to communicate better with each other and save yourself some misunderstandings, tears, and sighs in the long run, with just a little psychology.

Bright Side is here with 12 pieces of advice to help you have a smoother relationship with your boss, your parent, or your significant other.

1. Women: Don’t read between the lines. 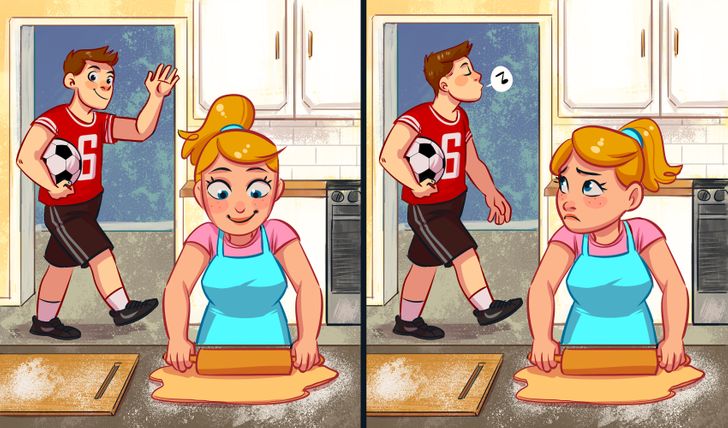 There’s evidence that women read more into interpersonal meaning in messages with their mates. In other words, they tend to “read between the lines,” and attribute values of intimacy and closeness to their partner’s words. On the other hand, men are more literal and might just expect the center of that conversation to be on a subject.

One example would be our illustration above. If he says “We have the semifinals today!” he means that. He doesn’t mean “I’d rather be with my friends, you’re boring!”

Understanding what each other wants out of a conversation in a relationship will help bridge the differences. This objective translation will also allow each member to feel cherished in the relationship. More on that later... 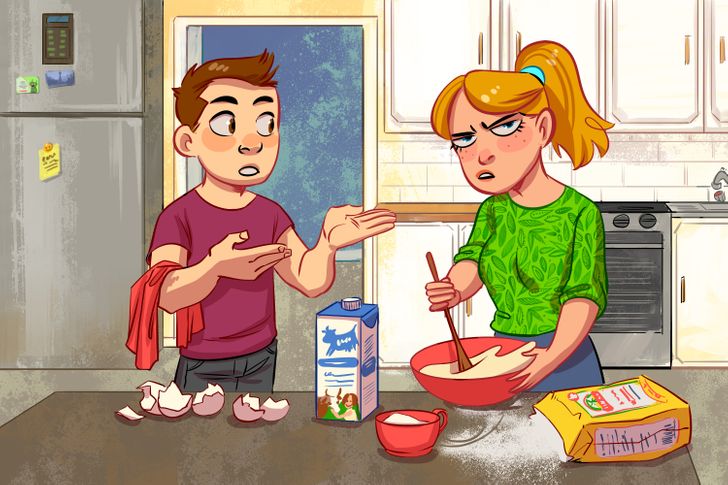 Women tend to see communication as a way to explore feelings and feel comforted by their partners. AKA: She’s not looking for a solution! It’s more about the journey and conversation itself that matters for her. On the polar opposite side... men have a tendency to want to think of clear solutions, healthy advice, and they want to deliver it as fast as possible. Because of this, couples can gain from just getting a better understanding of what the other is looking for. He wants to give advice, but she just wants to be heard.

3. Women: Appreciate that he wants to comfort you.
Men: Act like you care. 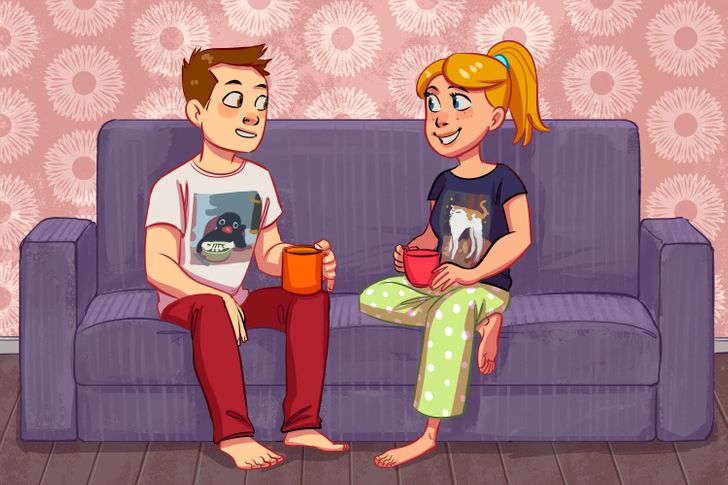 Men will see a problem that needs to be solved and show care for their partner by putting their energy into solving the problem for her. This means he will get analytical, explore different problem-solving tactics, and try to communicate them to her.

Meanwhile, she’s really just looking for an attentive listener. The man could really help his relationship by asking heartfelt questions in order to understand her better and make sure she feels like she’s being listened to (perhaps via some nonverbal cues). 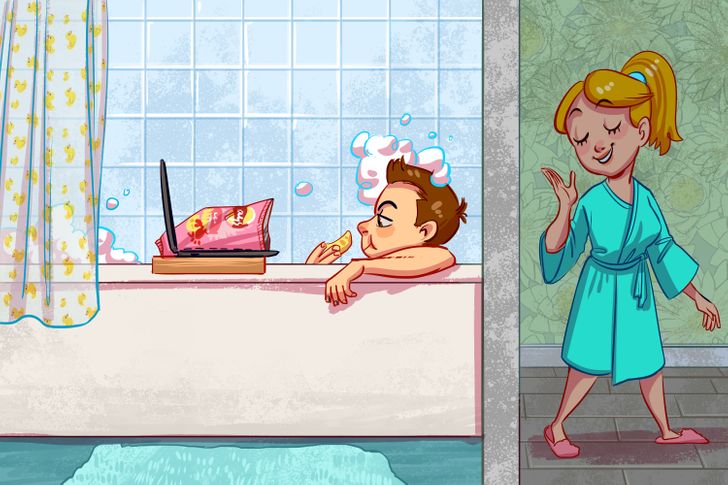 Men are often accused of being uncommunicative or withdrawn, and on the surface, this may appear true. But women might have a lot to gain from understanding the reasons for this behavior.

If your man seems a little bit isolated, this likely means that he’s just taking a quick break from his problems. This mini-vacay may take on the form of a marathon of video games, watching TV, or reading. Don’t fret about it — just give him his space! And make sure to make him feel like everything is going to be alright by letting him know that you trust that he is on top of things.

5. Women: Try to be more clear about your intentions. 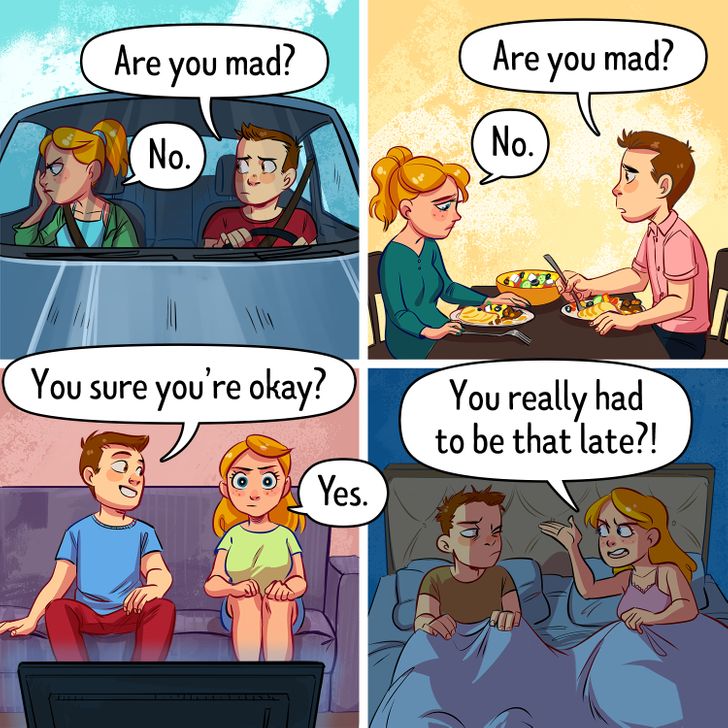 Women and men are different in how they say things to one and other. Women are a bit more indirect than men, tend to avoid direct accusations, and might prefer to launch indirect allegations instead.
So it might be best for women to be more precise with their man and for him to delve a bit deeper into what exactly they are actually discussing.

For example, she might not say, “I’m mad about what you said at dinner last night.” Instead, she might opt for a sarcastic remark such as, “Maybe you should think about being nicer during our dates.” When this happens, you might both be arguing about or defending different things.

6. Men: Make sure she knows you’re listening by giving feedback. 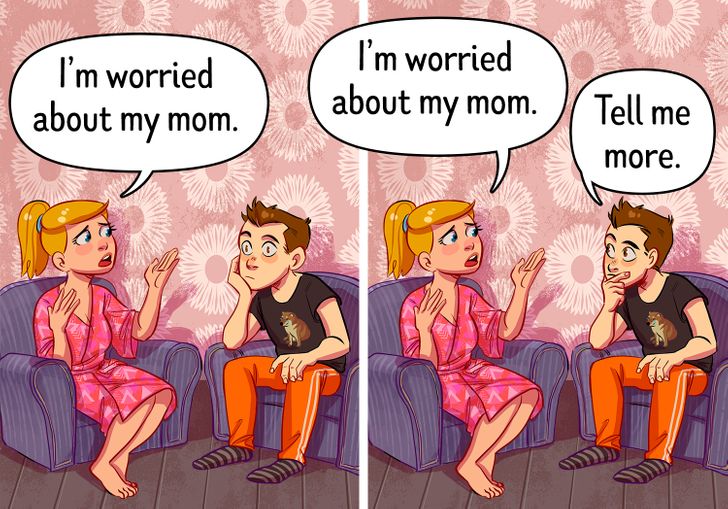 Partners differ in their communication styles via verbal responses, physical contact, and eye contact. Generally, men won’t place much stress on reaffirming his partner that he’s listening via eye contact or other verbal cues like, “aha... oh... well... yes...”. On the other hand, women place a strong emphasis on this constant feedback to assure themselves and those they’re speaking to that that both parties are engaged in the conversation. Humming might go a long way if you’re a guy!

7. Women: Try seeing a task as just a task.
Men: Add some romanticism into the task itself. 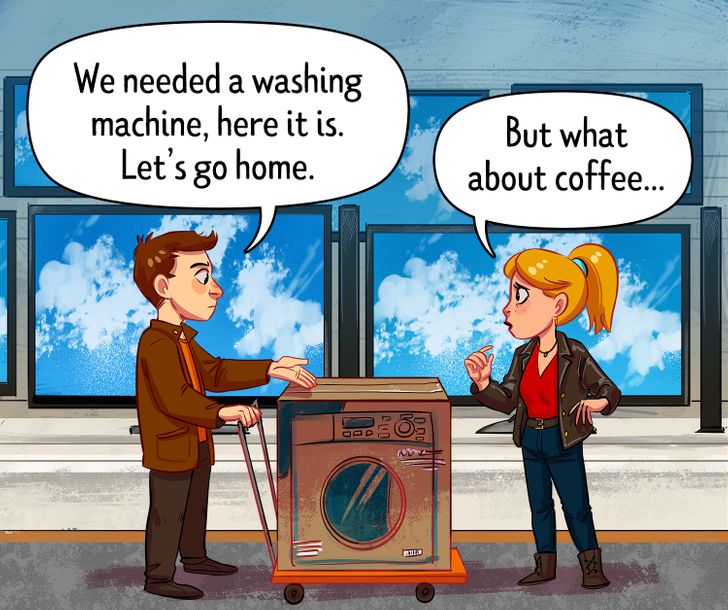 Women engage themselves by building trust first through talking and then participating in tasks together, that they will accomplish because of that trust. Men tend to dismiss this trust chat and instead rush straight into the mission of accomplishing a task. For example: If they need to work with their boss, they’ll do it even if they don’t like her.

Both parties stand to gain from taking a step back and seeing the way their significant other behaves, and always acting with additional empathy. They both may have the same objective in mind, but different ways and speeds of getting there!

8. Women: Understand that men often need to be doing something while they chat. 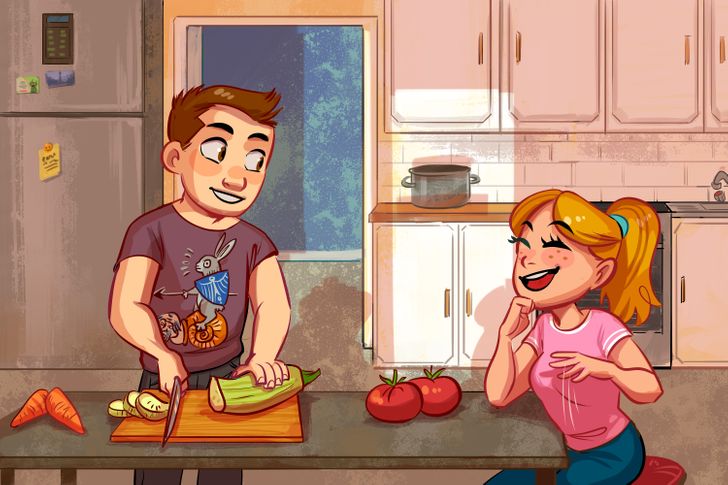 Men tend to communicate while doing, and the activity itself is central to fostering a feeling that they can open up emotionally. Meanwhile, women feel closer while speaking — they can go without the need for a secondary activity. Recognizing this may help women understand when their partner seeks to do something before, or even in the middle of, an argument. He might just be seeking out a better environment to discuss the issue, while she’s trying to discuss everything right now! 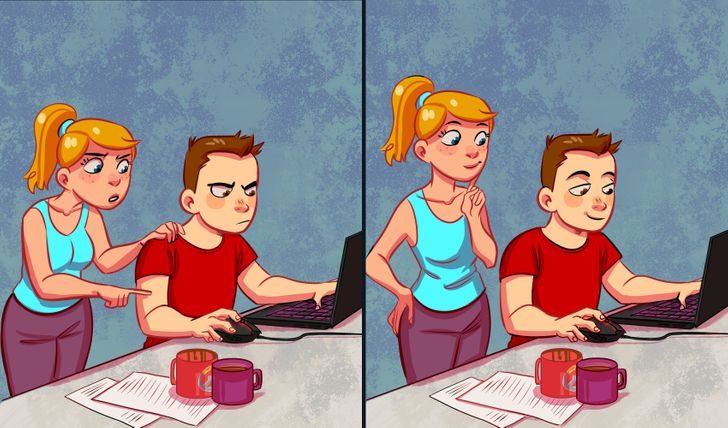 They may perceive that the need to ask for help is a reflection of their inability to achieve something. Meanwhile, for women, offering advice is perceived as a sign of caring for someone else. To bridge this gap, it may help to be as clear as possible about your intentions, rather than to allow the other person to just assume that you’re seeking to help as a way of pointing out their weakness to them. Yikes!

So, as an example, let’s take a look at the illustration above. Imagine he’s on his computer trying to solve a problem. Don’t just say, “You’re doing it wrong, you need my help.” Try saying instead, “I’ve had that bug before, want me to check and see if I can fix it?” 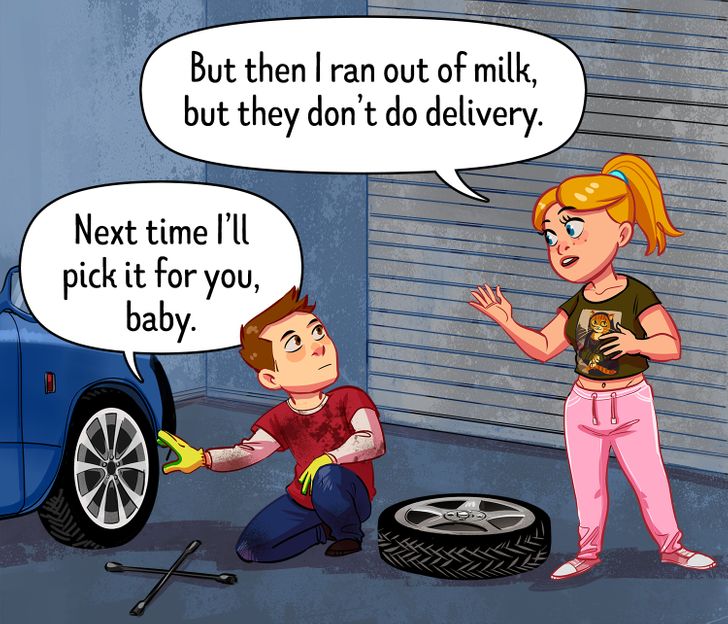 They’re what we call “selective listeners.” This point ties into the previous point about men seeking to solve problems — they’ll only listen long enough to ask as much as they deem necessary in order to find a solution. On the other hand, women show greater appreciation for verbal and non-verbal cues and may be offended if these 2 are not present. 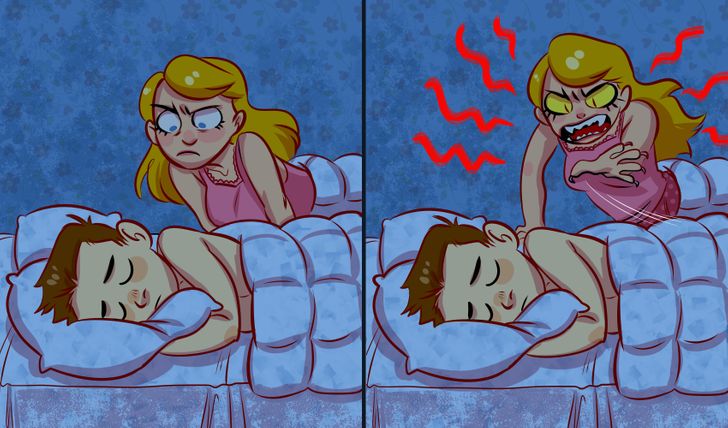 Men “compartmentalize,” while women see each argument as part of a greater whole. In other words, men are perfectly fine having an argument on a particular subject, letting it go, and moving on to a second subject without much thought about the former argument lingering in their minds. Whereas a woman is likely to carry her anger over onto the next item on the list. It may for help both to understand that this isn’t just her “not letting it go” or him “forgetting about it.” Instead, both members of the relationship simply understand problems and the relationships between them differently. 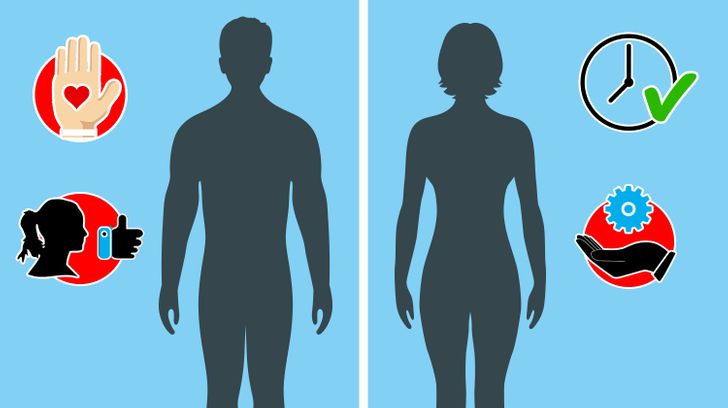 Although almost all of us have succumbed to the previous points, it’s also important to acknowledge that different people (regardless of their gender) have different communication styles. Some may be more competitive communicators, be okay with challenges, and be direct in their communication. Others may be more affiliative communicators, meaning they fall into the group of people who enjoy asking others for feedback, they like listening to all sides, and they generally avoid conflict. So, remember, your partner is also unique.

How do you understand guys more easily? What do you think are the biggest flaws in woman-to-man communication?