Queen Elizabeth II became the longest-reigning British monarch in history, Prince Philip retired after decades of royal service, and this royal couple welcomed 8 great-grandchildren... These are just some of the events that have happened since 2010. Now, let’s find out some more details about what the life of each royal family member was like and what’s changed in their lifestyle now.

The Bright Side team prepared a short review of how the lives of royal family members have changed during the past decade. 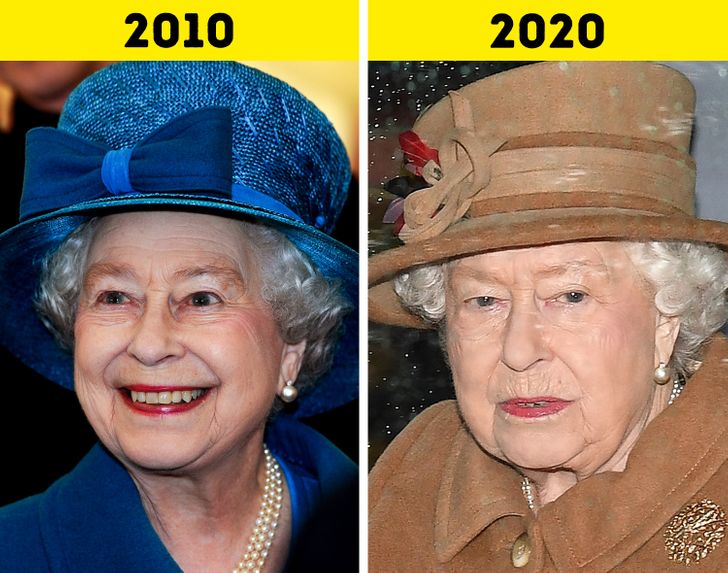 The most important event for the Queen happened on February 6, 2017, when she became the first British monarch who celebrated a Sapphire Jubilee, which means that, at that moment, she had been on the throne for 65 years.

The Queen also celebrated her 90th birthday in 2016, and a year later, she and Prince Philip reached their platinum wedding anniversary, becoming the first British royal couple who’s been together for 70 years. 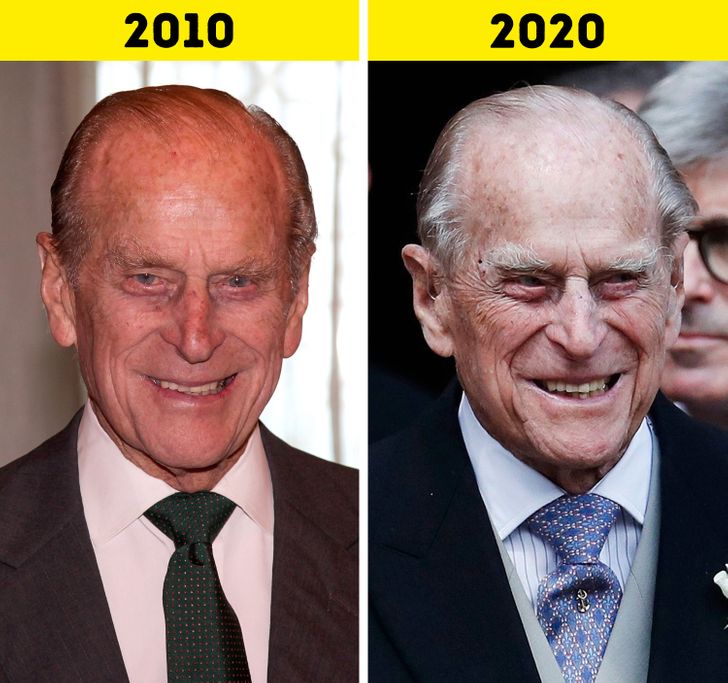 In May 2017, after 65 years of service, Prince Philip retired from all of his official duties. His last engagement took place in August 2017 at Buckingham Palace. Since that time, he’s been living a quiet life at Wood Farm on their Sandringham Estate: reading, painting watercolors, writing letters, and inviting friends to stay.

Over the past decade, Prince Charles has gradually taken more and more engagements on behalf of the Queen. The heir to the throne is also a keen environmentalist — in 2017, he even published a book on climate change. 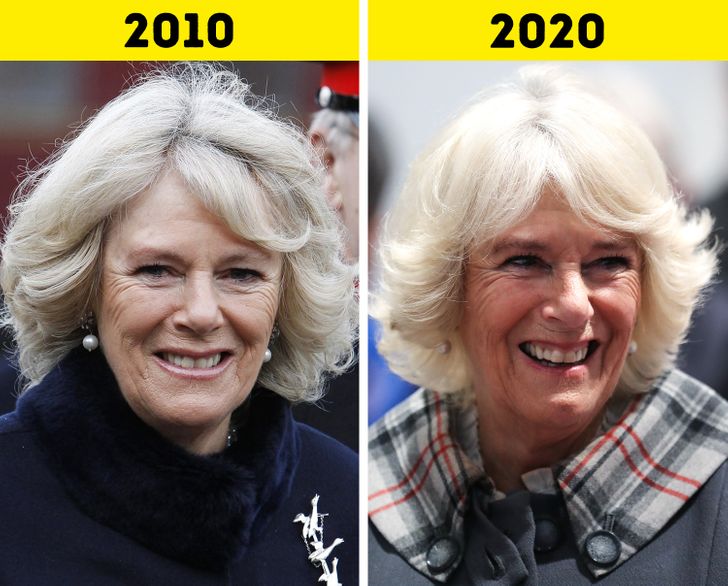 Together with her husband Prince Charles, Camilla took part in lots of official engagements in the UK and overseas. In 2017, she also celebrated her 70th birthday. 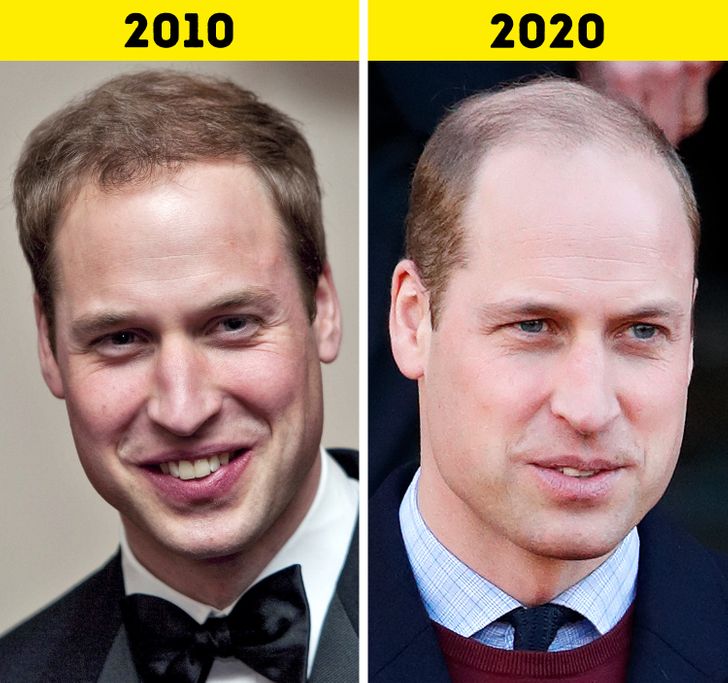 In 2011, William finally settled down and married his long-term girlfriend Kate Middleton. Today, he has matured into an outstanding father and a loyal husband.

As for his career achievements, after getting his Royal Air Force wings in 2008, he took a training course, and in 2010 became a fully-qualified search and rescue pilot, flying the Sea King helicopter. 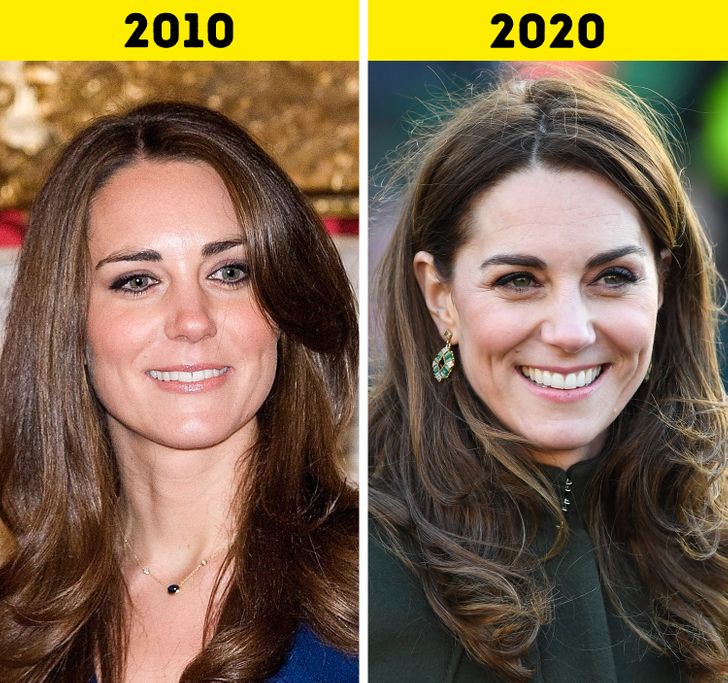 After their marriage in April 2011, Kate got her new title and became the Duchess of Cambridge, devoting her life to charities for mental health, children, sports, and the arts. 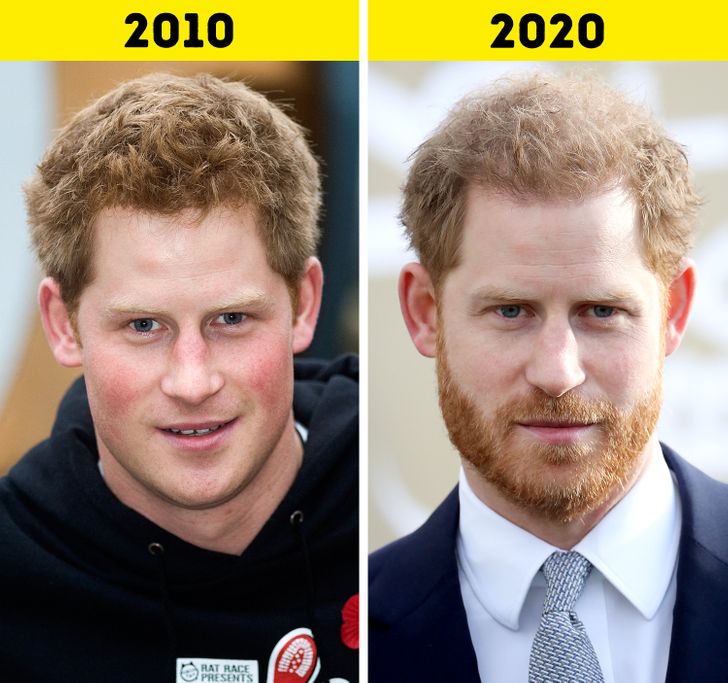 10 years ago, Prince Harry’s life was completely devoted to the army. He was a captain in the British Armed Forces and even was deployed to the war zone in Afghanistan in 2012. Then, in 2015, he officially left the army, but continued to support his fellow men and women. In 2014, he created the Invictus Games, a sporting event in which wounded military personnel compete in different kinds of sports.

In 2017, he first appeared in public with Meghan Markle. They married in May 2018 and had a son, Archie Harrison Mountbatten-Windsor, the next year. 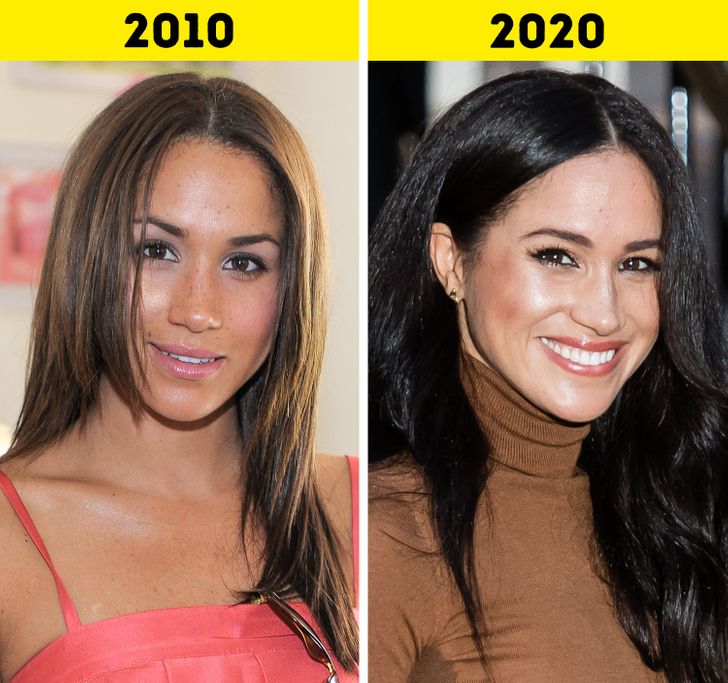 It was only a decade ago that Meghan was an actress and was starring in TV shows, including CSI: NY, General Hospital, and Suits. When she got engaged to Prince Harry in 2017, she quit her acting career to become a full-time royal. In May 2019, she gave birth to their son, Archie.

However, her life as a royal didn’t last long — at the beginning of 2020, the couple decided to give up their royal titles and start working to become financially independent while continuing to support the Queen. 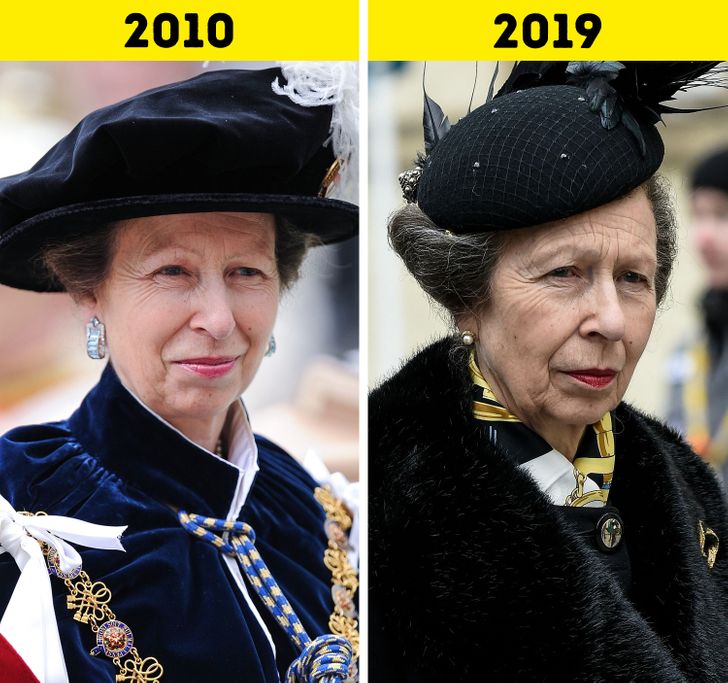 Princess Anne takes a lot of duties and engagements on behalf of her mother, Queen Elizabeth II. In 2017, she even undertook the most official engagements of the whole royal family, including her mother. She also travels abroad a lot and is involved with over 200 charities and other official organizations. 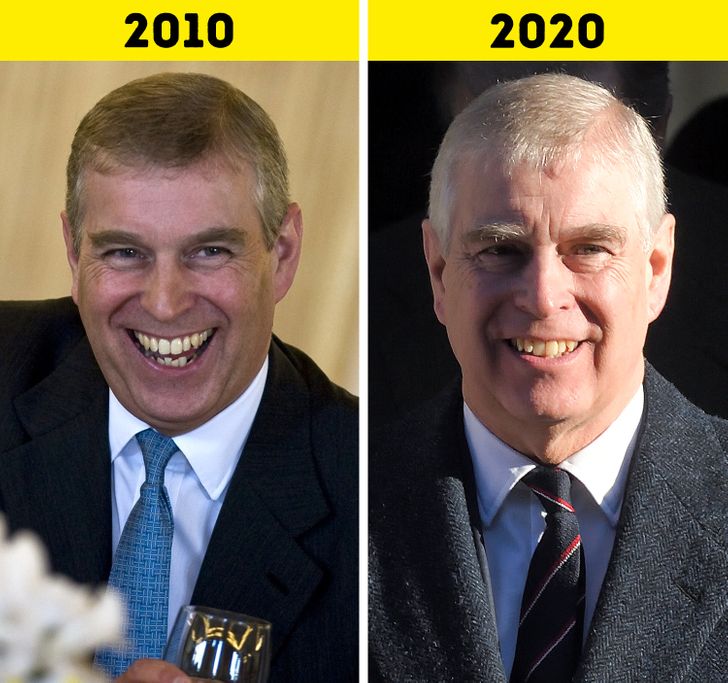 Until 2011, Prince Andrew served as Britain’s Special Representative for International Trade and Investment. In 2015, he became Chairman of the Trustees of The Duke of Edinburgh’s International Award Foundation. According to his new role, he travels within the UK and overseas, attends events, and presents Gold Awards.

In 2019, Andrew officially resigned from his royal duties for the “foreseeable future.” 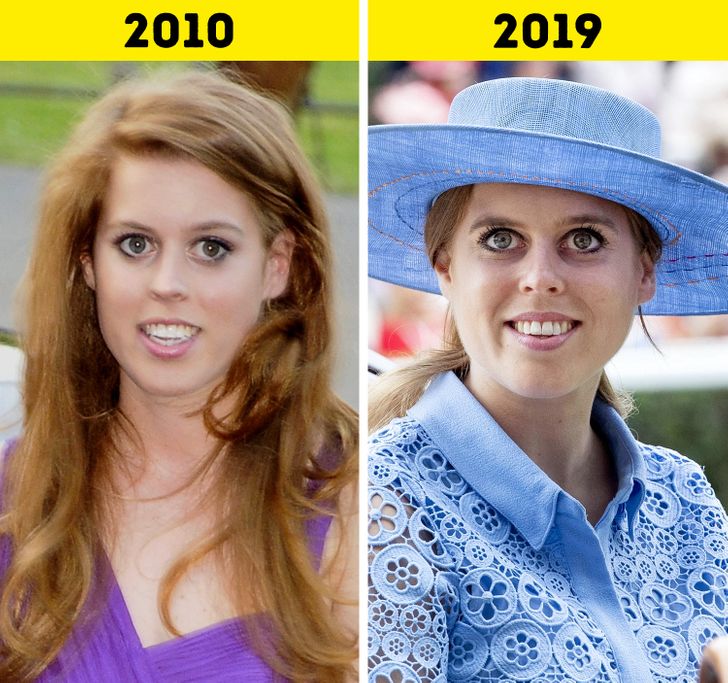 Since her graduation from college in 2011, Beatrice has changed a number of positions, including working for an IT company in New York and being a patron of the Children’s Hospice called Forget Me Not. In 2010, she also became the first member of the royal family to complete the London Marathon. 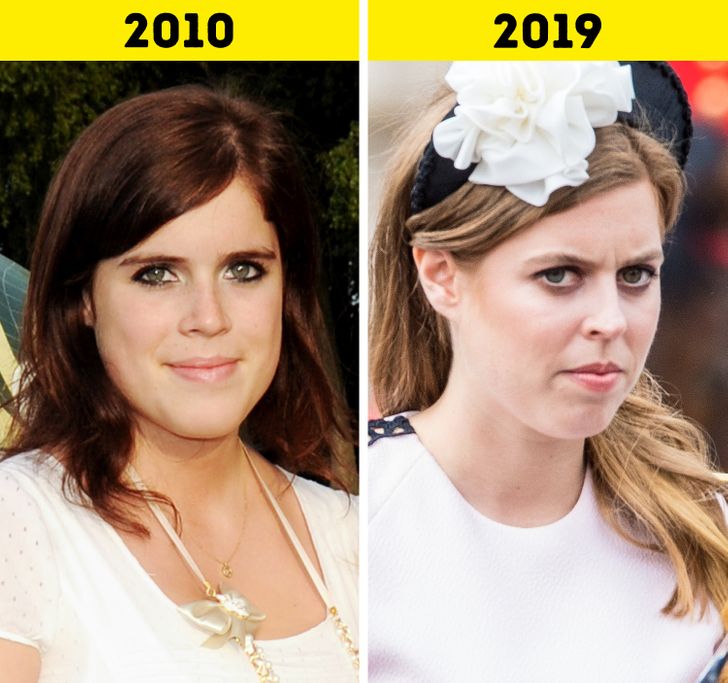 In 2013, Eugenie lived in New York for a year and worked as a benefit auctions manager for the online auction company Paddle8. Then she returned to London and got a position at the Hauser & Wirth art gallery, where she still works.

Back when she was in college, Eugenie met her long-term boyfriend Jack Brooksbank who she married in October 2018. 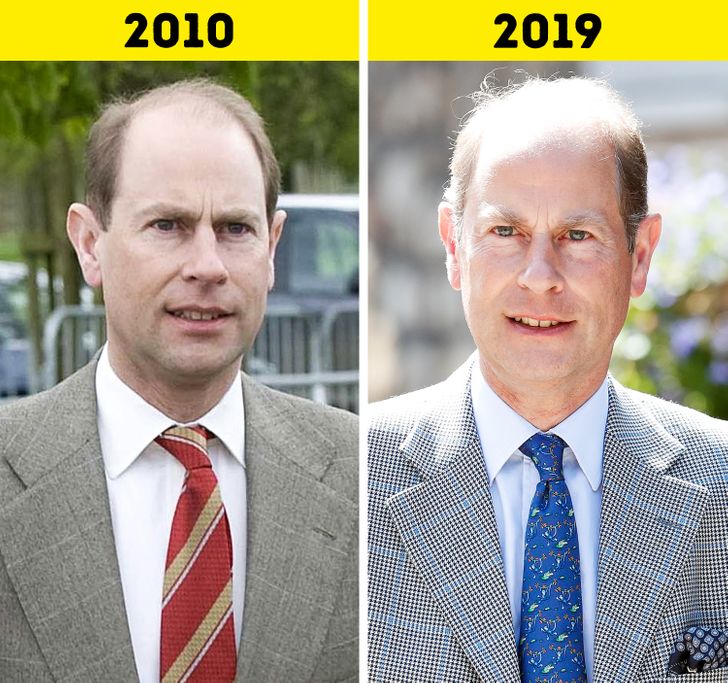 The youngest of the Queen and Prince Philip’s children, Prince Edward doesn’t crave public attention and prefers living a quiet life with his wife Sophie. They celebrated their 20th wedding anniversary in June 2019.

Though, Edward has his own royal duties, and quite a lot of them. On top of his military appointments and The Duke of Edinburgh’s Award Programme, he supports about 80 organizations, from Badminton Scotland to the British Paralympic Association, of which he is a patron. 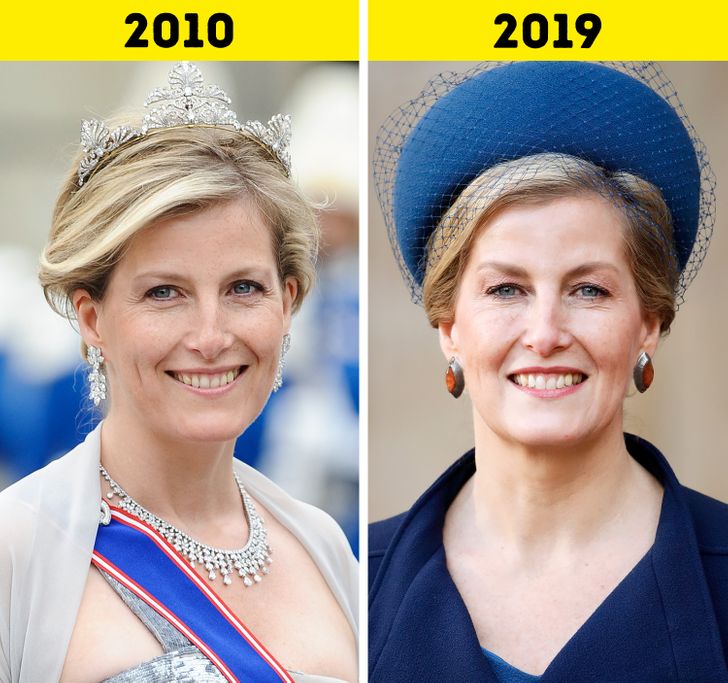 The Countess of Wessex often joins her husband when he carries out his royal duties. In 2011, they visited Afghanistan, in 2012 — the Caribbean, during the Queen’s Diamond Jubilee year. Besides that, Sophie takes part in lots of different things from fashion to supporting people with disabilities. In total, she is a patron of more than 70 organizations and charities.

Do you know about any other interesting events that happened to the royal family during the last 10 years? Let’s exchange our best memories in the comments!