12 Tall People Who Amazed the World

It is well-known that the average height of people grows every year. Now the “tallest” country in the world is the Netherlands. People’s average height there is 1.838 m (6 ft 1⁄2 in). But there are people who can be much taller than this and it amazes us.

At Bright Side we found 12 incredible people who are very hard to forget. And they look like real superheroes.

Stadnyk began to grow intensely after a brain surgery he had when he was 13. A gland tumor caused a hyper-secretion of growth hormones. He refused to be measured and never showed interest in being in the Guinness Book of World Records. His height was eventually recorded by the Ukrainian Book of Records.

This man is impressive. Denis Cyplenkov is an arm wrestler and an undisputed champion of the World Cup of professionals in the Nemiroff World Cup. His hands are not just incredibly strong, but they’re also huge. Just his wrist is 23.5 cm.

Sultan Kösen is known as one of the tallest men in the history. He considers his height to be an adventure and a big bonus to help his family with domestic tasks. But it is very difficult to find a suitable clothing size. And no wonder! His legs are 126 cm (49.61 in) and his sleeve length is 97 cm (38.19 in).

Brahim Takioullah is a Moroccan man who made it into the Guinness Book of World Records for the largest feet. Just imagine, his left foot is 38.1 cm, and his right is 37.5 cm. It’s amazing! His orthopedic podiatrist created a special pair of shoes for him that can support his weight. 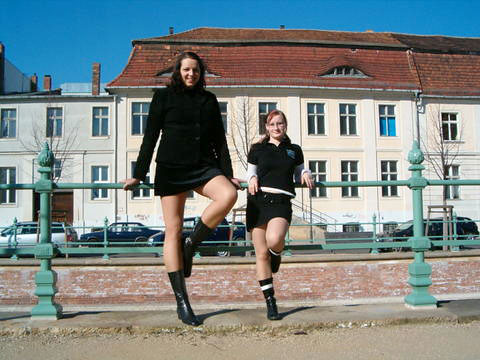 Caroline is considered to be the tallest woman in Germany. She was working as a model under the name Caro. Her height is 206 cm and weight is 117 kg.

This is Robert Wadlow and his father. This man was found to be the tallest in our history. He reached 8 ft 11.1 in (2.72 m). His height was because of a hyperplasia that produces an abnormally high level of human growth hormone. It’s hard to imagine now, but Wadlow weighed 439 lbs (199 kg).

We know that Dutchmen can be tall, but this guy is definitely above average. Olivier Righters is not just a bodybuilder, but one of the tallest actors. At the age of 29, he weighs 190 kg and looks like he can bend a car.

Her real name is Erika Ervin and she is known as an American model, fitness trainer, and actress. Once she realized that she couldn’t work in an office and was tired of her weight. Eve started to work on her body and became a Super Woman and an example of a healthy lifestyle for many people.

Broc Brown is considered to be one of the tallest teenagers nowadays. His gained his height due to a genetic disorder called Sotos Syndrome. This syndrome is very rare and effects cerebral gigantism. Despite the disease, Broc stays optimistic and his heart is as big as he is.

She is amazing, beautiful, and tall. Ekaterina Gamova is a retired Russian volleyball player. Her height of 6 ft 9 in makes her one of the tallest female athletes in the world. Some people know her as the “Queen of Volleyball” for the way she played the game.

This girl is fantastic. Yekaterina is the owner of world’s longest legs among women. Their length is 132.8 cm (52.2 in). She was also a Russian basketball player and took part in the 2008 Summer Olympics, where her team won the bronze medal.

How tall are you? Do you think being tall is an advantage or a disadvantage? Please, write your comment below and share this article with your friends.

7
0
8
5
38k
© 2014–2020 TheSoul Publishing. All rights reserved. All materials on this site are copyrighted and may not be used unless authorized by the Bright Side.